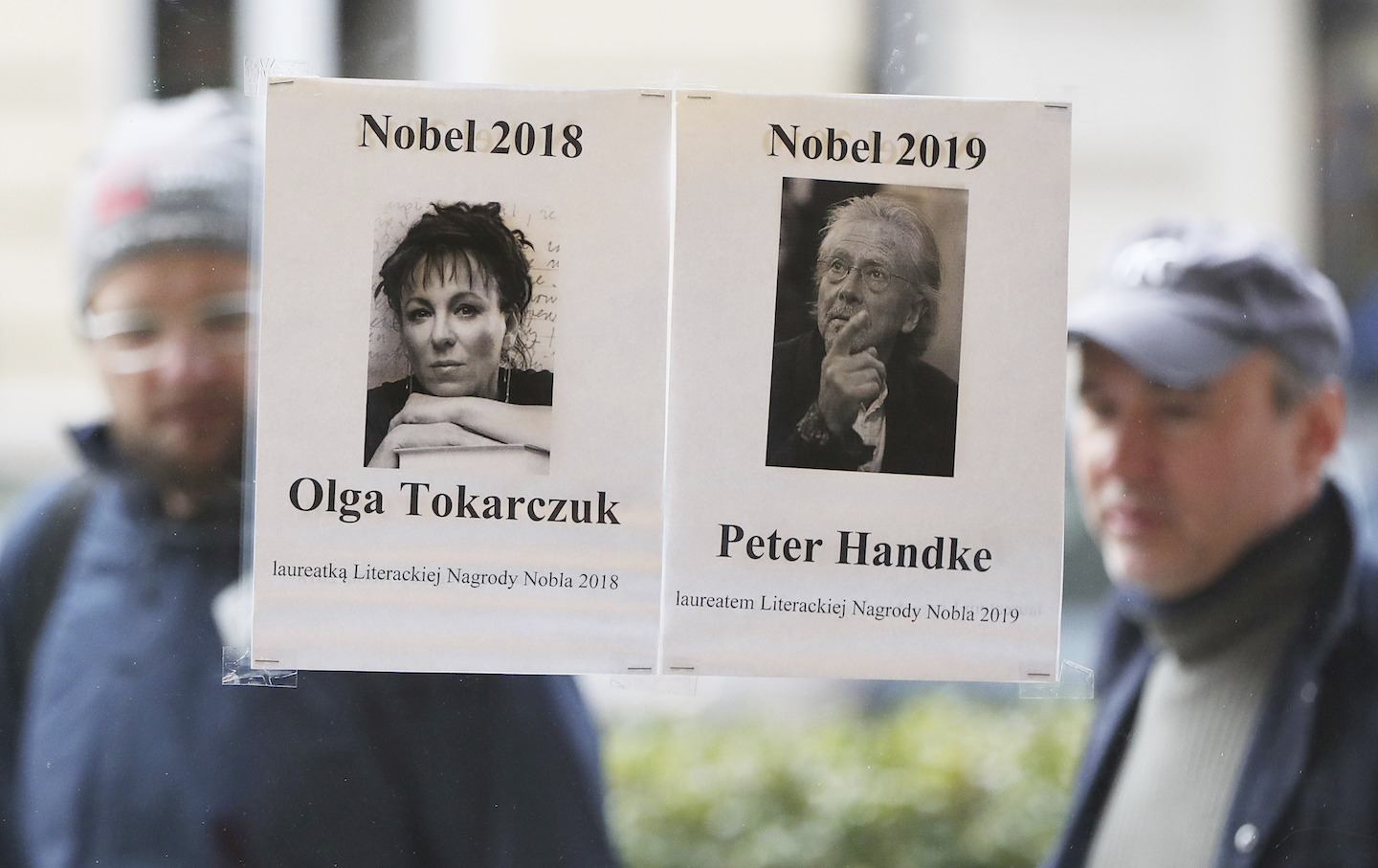 After last year’s prize was postponed in the wake of a sexual assault allegation and other controversies, the Nobel Committee for Literature gave out two awards this year: one to Polish novelist Olga Tokarczuk for its 2018 prize and the other to Austrian writer Peter Handke for this year’s prize. Awarding Handke the prize prompted a justified backlash, while awarding Tokarczuk received justified praise, and the Internet was soon taking a “Good morning to Olga Tokarczuk and to Olga Tokarczuk only” approach to the announcement. This is understandable, given Tokarczuk’s fearless opposition to far-right politics and Handke’s abject embrace of militarized nationalism. Though the decision seems split, the dual choice of Tokarczuk and Handke signals that the Nobel committee clearly wanted to spotlight a single issue: nationalism in Europe. With a Europe besieged by Brexit and xenophobia, the committee decided to make the subject one of the defining issues of the moment. But by selecting two European writers, the Swedish Academy, in refusing to look beyond Europe, failed to recognize one of the fundamentals of literature: that there is always more than one side to any story, especially when that story is about borders.

Tokarczuk is best known to English-speaking audiences for Flights, her formally innovative novel about travel and migration that took home the 2018 International Booker Prize. In Poland she is an outspoken feminist and has made headlines for her principled criticism of the country’s right-wing nationalist government at a time when the far right has been resurgent across Europe. Her 2014 magnum opus, The Book of Jacob, dealt frankly with Poland’s history of anti-Semitism—a taboo subject for many Poles—and created such fierce backlash from the country’s nationalists that Tokarczuk’s publisher hired private security for her. Her latest novel to be translated into English, Drive Your Plow Over the Bones of the Dead, was equally bold in its politics, offering an eccentric murder mystery as a frame to critique both patriarchy and meat eating. (Tokarczuk is an ardent vegetarian.) A careful observer of her country’s stated ideals and simultaneously a critic of its refusal to live up to them, she is precisely the kind of writer the Nobel Committee for Literature often seeks out for its award. As The Guardian put it, Tokarczuk is “the dreadlocked feminist winner the Nobel needed.”

Handke’s politics could not be more different from Tokarczuk’s—so much so that the dual awards left many prize watchers with a bit of whiplash. “Perhaps the Nobel Committee’s main mission these days,” The New Republic’s Alex Shepherd observed, “is not to diversify or evolve, but to troll.” Handke, who is of Slovenian heritage on his mother’s side, is best known as a screenwriter, and he made his name in the 1980s for his collaborations with German filmmaker Wim Wenders, in particular for their 1987 film about German reunification, The Wings of Desire  (1987), which was widely acclaimed. But Handke has also long been a controversial figure in European politics. In a 1996 essay, “A Journey to the Rivers,” he claimed the Srebrenica massacre, which took the lives of more than 8,000 Bosniaks, was staged by Bosnian Muslims (survivors of the massacre have called on the Nobel Committee to revoke his award), and in 2006 he spoke at the funeral of Slobodan Milošević, showering praise on the man called “the Butcher of the Balkans.” In response to Handke’s award, PEN America released a statement on behalf of its president, Jennifer Egan, condemning the choice of Handke. “At a moment of rising nationalism, autocratic leadership, and widespread disinformation around the world,” it read, “the literary community deserves better than this.”

Despite the differences between Tokarczuk and Handke, fundamentally, they both reflect a divided Europe as viewed from within its borders. As authors in their own right, there is, of course, no problem with that. But if the Nobel committee is seeking to turn the conversation toward the problems of Europe, specifically the problems it has with xenophobia and far-right nationalism, then the committee needed to look beyond the continent as well as within its borders.

Before last week’s announcement, one writer who emerged as a favorite was Guadeloupean writer Maryse Condé. Throughout her career, she pushed back against the assimilationist language policies imposed under European colonialism by incorporating Creole in her novels. Last December in Stockholm, she received the New Academy Prize, an award arranged to replace the 2018 Nobel for Literature after news of its postponement. She writes powerfully about how Creole identity was forged through displacement and as a result always retained a cosmopolitanism that the European metropoles often lacked. “Nobody believed” that African slaves, indentured natives, and French settlers “could have fused to create an original culture,” she observed in The New York Review of Books, and her novels capture the original culture they created: a vexed cosmopolitanism that was forged through displacement and that was both enriched and haunted by the violence of the past. If that sounds familiar, it is because history has made Condé’s a perspective that is relevant to the challenges facing Europe. Her work, a model of cultural hybridity that resists the kind of colonial amnesia that often accompanies Europe’s liberal discourse around multiculturalism, is a powerful reminder of why ;Europe can’t just read itself.

Correction: A previous version of this article incorrectly stated that Peter Handke is of Serbian heritage on his mother’s side. His mother was Slovenian.
Keep Reading
Ad Policy