Celia Paul cried throughout her first sessions modeling for Lucian Freud. “The experience of being naked disarmed me,” Paul writes in her new memoir, Self-Portrait. She describes sitting for him as a tortuous experience and the sense of his scrutiny as overpowering. “I felt like I was at the doctor’s or in hospital, or in the morgue.” At one point, he tells her that her breasts reminded him of eggs; then he boils one, slices it in half, and places it in a dish in front of her. She has to lie still while he paints it. 1

This became Freud’s Naked Girl With Egg (1980-81), a strange and slightly surreal work that one critic noted was emblematic of Freud’s interest in female genitalia, a painting that “turns the body inside out and drags the mystery into the daylight.” The mystery dragged into the daylight was Paul’s body, naked and splayed on a black bedspread, as she cups her breast with her hand. Her eyes are turned upward toward something in the distance so that we see mostly their whites. In front of her, on a small table, is the egg, looking like a pair of disembodied breasts or yellow eyes.2

The naked girl and the famous artist: It’s an old story and perhaps  predictable arrangement of roles for Freud, the much older and more famous painter, and Paul, his beautiful younger lover; he paints and she sits for him. And yet. The concept of sitting occurs over and over again in Paul’s book, and these roles are not as static as Naked Girl With Egg might lead us to believe. Nor is sitting as simple as it might seem. “The act of sitting is not passive,” Paul writes, describing it, at times, as almost a form of intense meditation, one that requires its own kind of focus.3

Self-Portrait might be read as a series of sittings over the course of a lifetime. Paul sits for Freud many times throughout their relationship, but he also sits for her. So do all of her sisters. When Paul is just starting out as a painter, her mother sits for her and cries because she feels like her daughter is treating her as an object. But as Paul’s career continues, sitting becomes something of a vocation for her mother; she takes the train twice a week to London to sit for her daughter in her studio. Time passes, the roles and the balance of power alter, and so the acts of sitting and painting change, too. There are traditional narratives about the painter and his subject, the genius and his muse. Paul tells us that, in her life, this story was at least partly true: She was the naked girl on the bedspread, weeping and overexposed. But it is part of a longer story that she is telling about herself and Freud and others in her life, about the painter and those she paints. In Self-Portrait, Paul is her own subject, but so are the shifting conditions of subjecthood and objecthood, the changing relationships between the painter and the painted.4

Celia Paul was born in 1959 in Trivandrum, India. Her father was a missionary and later a minister in rural England. Paul learned to paint while at boarding school. When she was 16, after a teacher noticed her talent,  she went away to the Slade School of Art in London. There, two years later, she met Freud, then 55 and a visiting tutor at the school. She showed him some drawings and a painting she had done, and he invited her back to his flat to show her one of his. When he kissed her, she writes, she was a little frightened. Slowly, they became romantically involved, as she moved from rented room to rented room in London, waiting for him to call. Their love was rooted in painting—both the act of putting paint to canvas and a shared devotion to art as the primary purpose of their lives. Their relationship was also turbulent. He often had other lovers, and she occasionally did, too. He had a daughter roughly her age. In the prologue, Paul states that one reason she wrote this book was to tell the story of their relationship on her terms: “By writing about myself in my own words, I have made my life my own story. Lucian, particularly, is part of my story rather than, as is usually the case, me being portrayed as part of his.” 5

Her telling of this story is characterized by a certain matter-of-factness. She incorporates old journal entries and letters, which float to the surface of the narrative with a particular intensity, and images of her and his paintings. Paul’s prose is at once unflinching and direct as well as reticent, full of gaps. She tells us the details of a delicious meal she and Freud shared at a bistro but not quite how she was feeling or why she acted a certain way. She also reflects on a period when she was living in London, drinking heavily and sleeping around, trashing her quiet landlord’s beautiful house, but she doesn’t really tell us where these seemingly out-of-character impulses sprang from. She doesn’t explain herself; there is a kind of dialectic between directness and reticence in her work, as she reports the facts but obscures the motivations. It made me think about portrait painting: After all, what is a portrait if not a painting of a surface, an outer layer that hints at something deeper? In her written portrait of herself, Paul exercises a kind of control in the acts of revelation and withholding.6

In many ways, this is not a book about Freud but rather one about painting. Paul writes about the particular intensities and tediums of her work, its relationship to life, and its peculiar power dynamics. She describes, too, the sacrifices and tensions that she sees as inherent in being a woman artist. Paul is nearly ascetic about her work, even to this day at age 60. She chooses not to live with her current husband in order to preserve her privacy and time for painting. For the same reason, when she and Freud had a son, Frank, she did not live with the child; his primary caretaker was her mother. She does not apologize for this, nor does she valorize it. She simply relays the circumstances of her life, what felt necessary and what did not, what allowed her to paint and what she gave up to do so. 7 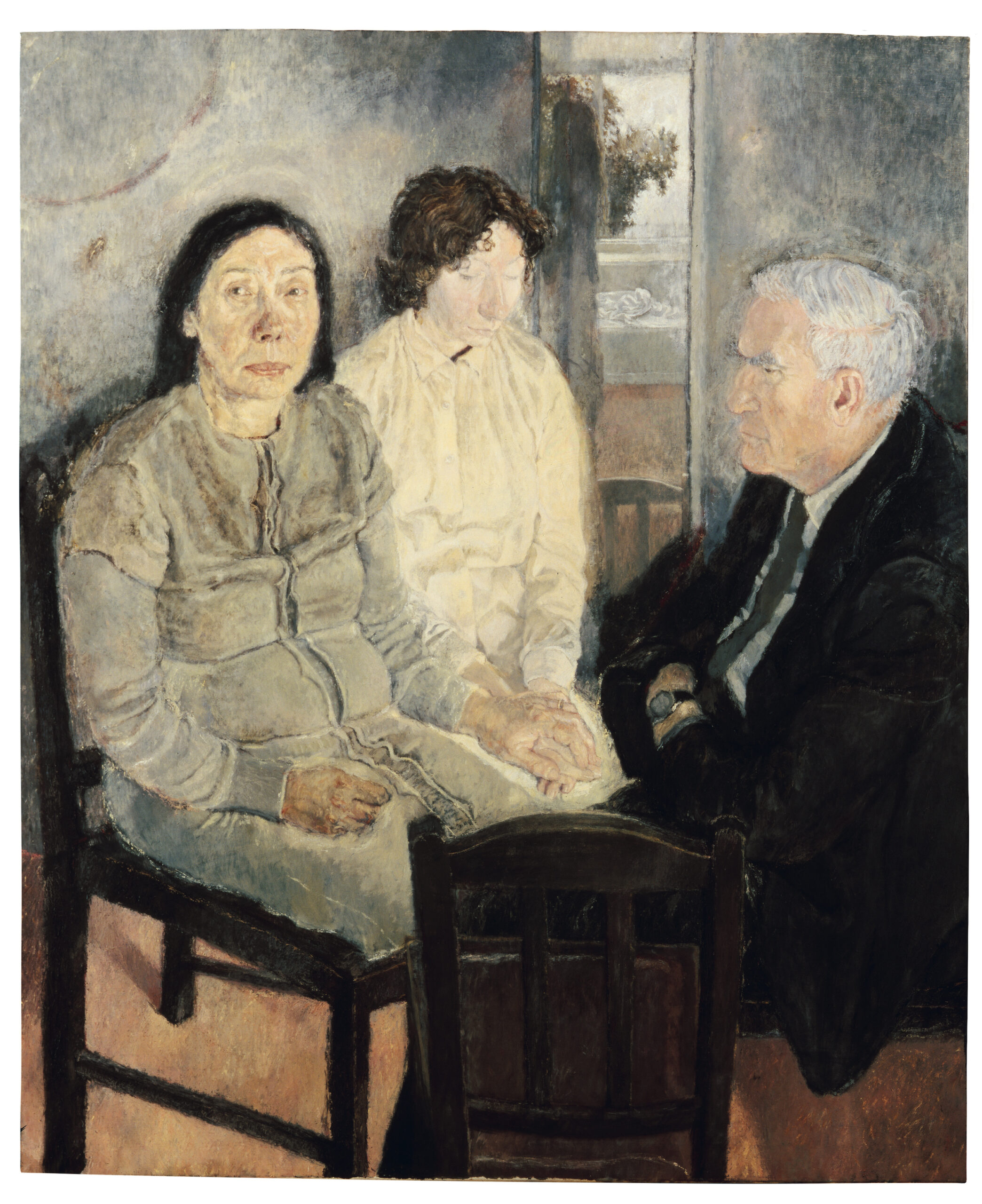 The interplay between solitude and proximity, between separation and closeness, factors into all of her close relationships. In a piece by her son for an exhibition catalog, which Paul excerpts, he writes: 8

Isolation is deeply important to my mum’s peace of mind…. Her studio, which no-one else may enter without permission, is a mass of splintered floorboards, paint spatters and canvases, but, like [her] bedroom, it’s devoid of any adornments which others might find necessary for a sense of self-assurance. One might conclude from this that my mum is an entirely self-subsistent person, yet she feels separation keenly, as well as a deep guilt that her need for solitude precludes her from being as hospitable as she would like to be.9

Frank seems to have made a kind of peace with the unusual domestic arrangements of his childhood and with his mother’s need for solitude. He has come to understand that her choices were not easy for her. And yet Paul implies—again, somewhat reticently—that he did not always feel so settled in her choices, and neither did she. She describes the experience of painting a portrait of her young son perched on his grandmother’s lap, as well as the sense that something about the arrangement of their roles was strange. “I felt that it might be wrong and suspect for me to be standing looking at him, where I had placed him, lower than me on my mother’s knee,” she writes. “I should have been the one who was sitting. I sensed that he felt this, too, and that there’s a trace of indignation in his regard, and a hint of hurt pride.” When he was a teenager, Frank started to refuse to sit for her, even becoming angry when he discovered in her sketchbook that she was making sketches of him sleeping. It was a rejection, perhaps, of the feeling of being somehow used. Later in life, though, he began to sit for her once again, listening to audiobooks while she painted him.10

So it goes: the flux of sitting and painting. Paul looks back to a time in her early years with Freud when she tried to paint a portrait of him, which simply wouldn’t come together. “I think I felt, at the time, that although I was Lucian’s subject, he wasn’t mine,” she writes. She only finished the painting many years later, after his death.11 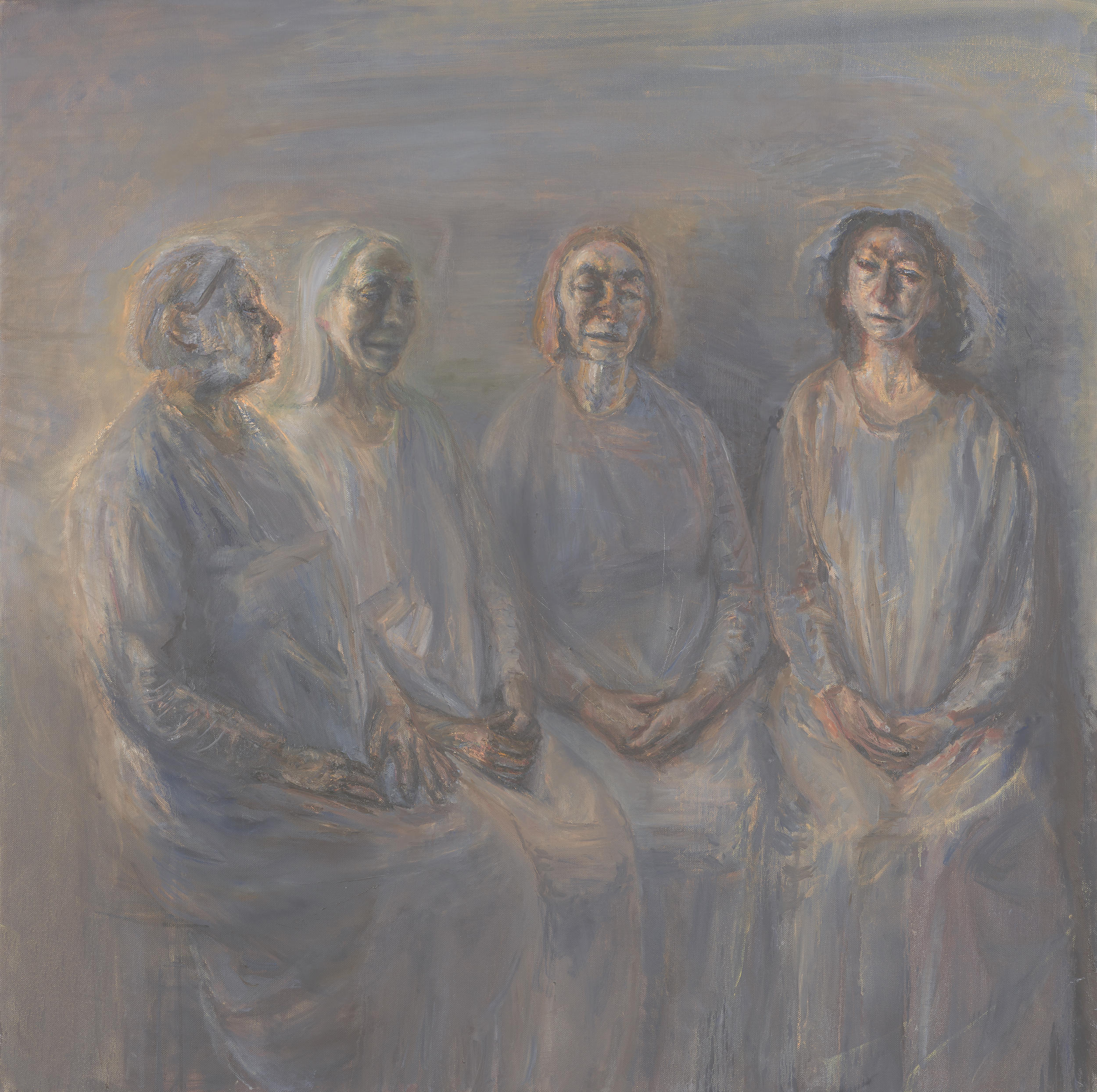 The last portrait Freud did of Paul before their relationship finally came to a painful end was called Painter and Model. In it, she is painting a nude male model; she is dressed in a paint-covered smock, stepping on a tube of paint and brandishing her brush. It is a clear reversal of the traditional gender roles in art, a radical image of a woman artist in control of the male body. “I felt honoured that Lucian should represent me in the powerful position of the artist: his recognition was deeply significant to me,” she writes. “But underlying my pride, I felt wistful that I was no longer represented as the object of desire.” It is not so straightforward after all, the shedding of the objectification that bothered her so much in the beginning. Paul distills these tensions masterfully, and her book does something that painting alone cannot, linking all of these sittings and portraits in a way that allows us to see the relationships from different angles and at different times. She fluctuates between subject and object, not just in her relationship with Freud but even in her own conception of herself and how she would like to be seen.12

After Freud died in 2011, Paul writes, she wanted to paint something about what he meant to her. She called this work Painter and Model, and it is something of an updated version of the one he did of her. But this one is a self-portrait, giving the title a new frisson of meaning. Paul sits and looks straight ahead, wearing a similar spattered smock, the paint tubes scattered around her feet. She is older and looks a bit stoic, somewhere between happy and sad, but peaceful.13

This version is more visually muted than Freud’s—it’s darker in color and has a single figure, and there is no action frozen on the canvas. It does not have quite the same obvious thrill of upturned power dynamics, the woman artist wielding her brush over a lounging male nude. In this portrait, she is simply sitting. But of course, as she has told us, this is not so simple at all. Of all the paintings in the book, this one perhaps crystallizes most essentially the act of sitting, which animates so much of Paul’s work. It also manages to capture most clearly that strange liminal space she occupies, that perhaps we all occupy, moving between subject and object, caught in a flux of power and attention, in a single canvas.14