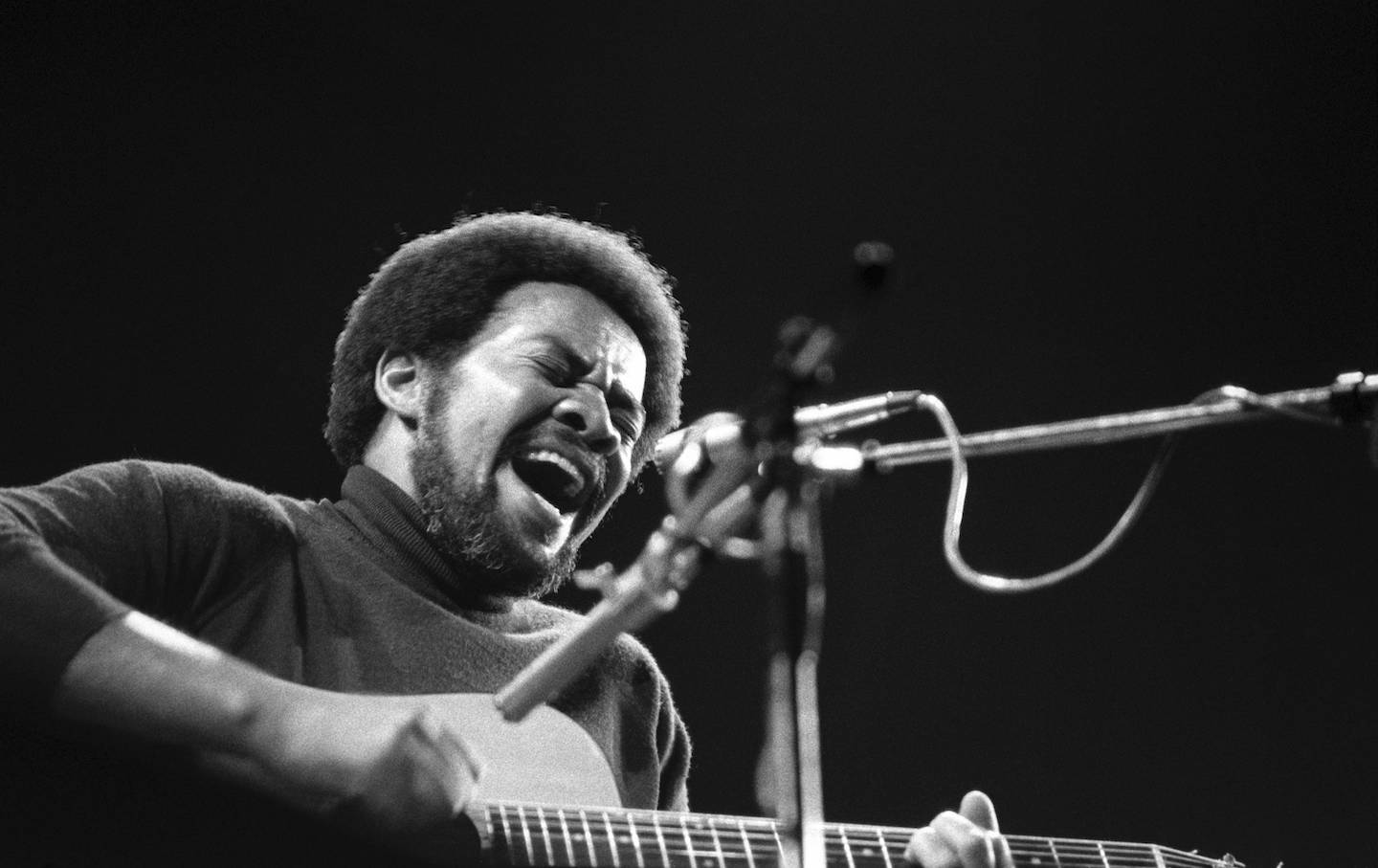 Bill Withers at the Rainbow Theater in London. (Photo by Fin Costello / Redferns)

Like Bill Withers himself, I was late to recognize how good Bill Withers was. When he made his first recordings, almost 50 years before his death at 81 on March 30, he was already 31, a Navy veteran working in an aircraft parts factory in Southern California. He had written some songs on a pawnshop guitar he taught himself to play, including “Ain’t No Sunshine” and a few other gems of soulful pop, and got signed by impresario Clarence Avant, the self-proclaimed “Black Godfather,” to record for his label, Sussex Records. Avant assigned the R&B maestro Booker T. Jones to produce, using members of Jones’s ace combo, the MGs, along with Stephen Stills on lead guitar. Withers, older but far less experienced than most of the musicians playing his songs, was nerve-racked until a friend of Stills who had been listening in, Graham Nash, sat in front of Withers and told him, “You don’t know how good you are.”

Everyone who has been alive since that day in 1971 has lived with Withers’s songs, from “Ain’t No Sunshine“ and “Lean on Me,” the Grammy-winning singles from his first two albums, to “Just the Two of Us,” another Grammy winner, from 1981. Smash hits in sales and on radio at the time of their release, the songs remain ubiquitous in perpetual rotation in oldies satellite feeds. We’ve all heard “Ain’t No Sunshine” and “Lean on Me” so many times—and not only in Withers’s original versions but also in covers by Michael Jackson, Aaron Neville, Joan Osborne, Neil Diamond, Seal, and dozens more—that we hear them but don’t listen anymore. We know the songs too well, or so we think.

As a teenage rock ’n’ roller at the time Withers’s records dominated the pop charts, I dismissed them as the kind of middle-of-the-road contemporary music my parents liked—hence unworthy of serious attention by connoisseurs of three-chord thrashing like my garage-band friends and me. “Ain’t No Sunshine,” with its somber tone, slow-dance tempo, and swirling strings, struck me then as lightweight and slick. “Lean on Me,” another unhurried tune with more swirling strings, seemed just as thin and not much better the other hits of the era on the theme of compassion, like “You’ve Got a Friend” (written by Carole King and released as singles by her and James Taylor) or Simon & Garfunkel’s “Bridge Over Troubled Water.”

By the mid-1970s, Withers was well established as a hit maker and major concert attraction, an extraordinary achievement for someone who turned to music so late in life and had none of the glamour and pizzazz of pop and rock stars of the day like James Brown, Barbara Streisand, and David Bowie. Born in poverty in rural Slab Fork, West Virginia, in the Jim Crow era, Withers was one of six children raised in humble quarters by the railroad tracks that divided the black and white neighborhoods. His father, a coal miner, died when Withers was 13, and he suffered from a severe stutter, which he would attribute to intense insecurity. “I had a much higher opinion of everyone else than I did of myself,” he later told an interviewer. (He didn’t overcome the stutter till his years in the military, after a commanding officer recommended speech therapy.)

In July 1974, Withers performed at Avery Fisher Hall (now Geffen Hall) in Lincoln Center, his first major appearance in New York since his 1972 debut at Carnegie Hall, which was recorded and released as a live album in ’73. I had recently moved to New York to attend NYU and was invited to the Avery Fisher show by a friend who knew the pianist for the opening act, the bawdy-blues singer Novella Nelson. Watching Withers perform without a hint of performative showbiz, I heard his music for the first time after hearing it countless times, and I’ve loved it ever since.

Video footage from that period on YouTube, including a concert for the BBC in 1973, preserves the essence of what I saw. Withers, unpretentious but utterly comfortable in his skin, sang softly but affectingly in a voice so natural, it seemed like talking in notes. His self-taught guitar playing was powerful, too: Watching him carefully work up the most rudimentary chords, finding palpable joy in pulling them off, drove home to me the personal urgency in his music. It was music its maker clearly needed to make, with no need for technical display and no desire to impress. Elsewhere in New York that summer, groups of near-musicians my age were making a new music called punk rock that was beginning to be lauded for its raw simplicity and unapologetic amateurism. Here was Withers, quietly executing a different permutation of the same values.

Withers treasured the mystery in the creative process and tried not to spoil it with overthinking. “I never learned music. I just did it,” he told The New York Times. Asked by the zine Pure Music to explain his writing process, he said, “I don’t really want to know too much about how I do it. Because then it’s not magic anymore. Early in my life, I was an airline mechanic, so my life was full of, you know, you attach this to that and you put so much torque on it, and this causes that to happen, and that causes the other, and your life is full of rules…. So the one magical thing for me is when something comes from somewhere and I don’t know where it came from. It just crossed my mind.”

By the late 1980s, Withers had made all the music he felt like making. The high point of his output, to me, is his third album, +’Justments, a blunt and searing diary of his romance with the actor Denise Nicholas, their marriage, and their breakup. After his eighth album, Watching You Watching Me, in 1985, he walked away from the music business and settled into a quiet life with his second wife, Marcia Johnson, and their family in California. He still gave interviews, and he happily appeared in public for events like his induction into the Rock and Roll Hall of Fame in 2015. But he didn’t look for attention, and he didn’t get much.

“This business came to me in my thirties,” he reflected in an interview with Rolling Stone in 2015. “I was socialized as a regular guy. I never felt like I owned it or it owned me.”