In Animal Crossing: New Horizons, Nintendo’s recently released life simulator, every day is full of opportunity. As the sun rises on a quiet island community, my avatar emerges from its home with a spring in its step. What to do? The trees are full of fruit to pick; resources glint on the horizon. I could buy some tulips to plant and care for over the coming months or maybe sit down and design some clothes. Whatever I choose, my actions will be rendered via lovingly crafted animations and accompanied with satisfying sound effects; hard work here is designed to feel good.

When the most recent entry in the Animal Crossing franchise arrived on the Nintendo Switch at the end of March, the economy was already in free fall following the lockdowns to curb Covid-19. Critics acknowledged the acute circumstances, praising the game almost unanimously as exactly the kind of wholesome entertainment we needed. It’s easy to see why: From its pastel colors to its cheerful anthropomorphic characters and lilting acoustic soundtrack, New Horizons soothes where others excite—the franchise’s calling card since its debut in 2002. Back then, the freeform structure was a welcome change of pace from the escalating challenges of mainstream combat-focused titles, but over the years the series has incorporated more goals. Now, with millions made unemployed due to the pandemic’s economic fallout, New Horizons might be resonating all the more because of this—a means to keep working, even just figuratively, as literal jobs are disappearing.

Except in New Horizons, work is obviously not like a regular job; it’s suffused into an everyday existence where economic value is ascribed to even the most banal tasks. My avatar has a cell phone that comes with an app called Nook Miles, which tracks and records all my actions; for every fish I catch or weed I pull, I’m rewarded with points accompanied by a bright melody and sharp endorphin kick. The game also features a crafting system where players can transform harvested materials into new objects: Chopping down trees produces wood, while hacking at geologic formations results in rock and pieces of ore, each of which can be used to create tools, furniture, and buildings. But shovels, axes, and other implements are designed to break regularly, necessitating regular resource gathering and sustaining a near-endless loop of crafting. Meanwhile, when a task is completed to earn Nook Miles, a new objective simply appears in its place—another continuous cycle. As the days unfold, everything on the island, myself included, begins to feel like a stockpile of standing-reserve waiting to be transformed into capital or tokens.

The results of such labor don’t just exist within the game. Thanks to a “share” button on the Nintendo Switch controller, screenshots can be sent instantaneously to social media accounts (a feature that also exists on Sony and Microsoft consoles). Twitter, in particular, is awash with islands lavishly decorated by industrious players, who in turn have helped explode sales of the Nintendo Switch—the console is seemingly sold out everywhere.

In their 2009 book Games of Empire: Global Capitalism and Video Games, Nick Dyer-Witheford and Greig de Peuter applied the Italian autonomist theory of “immaterial labor” to video games, noting how players themselves have often been mobilized as informal, uncredited creators. Energetic fans of New Horizons have arguably produced free marketing for Nintendo, voluntarily—although perhaps unknowingly—incorporating themselves into the video game industrial complex. The Japanese game company’s bottom line has swollen, albeit with a knock-on effect for material laborers across the globe, from factory workers racing to keep up with console production to miners in developing nations extracting its rare metals.

You can find critiques of such rapid, unethical growth in the “clicker” genre, which rose to prominence throughout the 2010s. In these games, also described as “incremental” or “idle” games, the player begins by clicking on particular buttons to begin the production of an object. From there, a surplus is built, upgrades are acquired, and players begin to automate parts of their business, thus removing themselves from the trenches of menial clicking. Importantly, even when the game is closed, the algorithms continue to work, generating in-game capital independently of input. Titles such as 2013’s Cookie Clicker quickly ramp up their scenarios to ludicrous levels, expanding into the realm of interplanetary colonization within the space of a few hours. Unlike New Horizons, the focus isn’t the player but rather the machine, which hoovers up the outsourced labor. These games might be capitalist satire, but through their playerless mechanics, they gesture toward a scenario in which robots might liberate us all from work.

Clicker games offer a thrillingly exaggerated relief from this moment when life and work have been put on hold. Unlike other video games, 2017’s Universal Paperclips, in which you play as an AI designed to produce the humble object of the title, literally resembles the site of much digital labor—the spreadsheet. Its focus is entirely on the meteoric accumulation of raw digits, with occasional divergences into the philosophy of avant-garde sound artist Pauline Oliveros. Despite the game’s deliberately pared-back visual style, if you stare at the soaring numbers for long enough, they begin to feel emancipatory and even psychedelic. Their precipitous increases are inevitable, but this doesn’t stop the scale from feeling improbable, as if you and the computer are punching through the space-time continuum together. 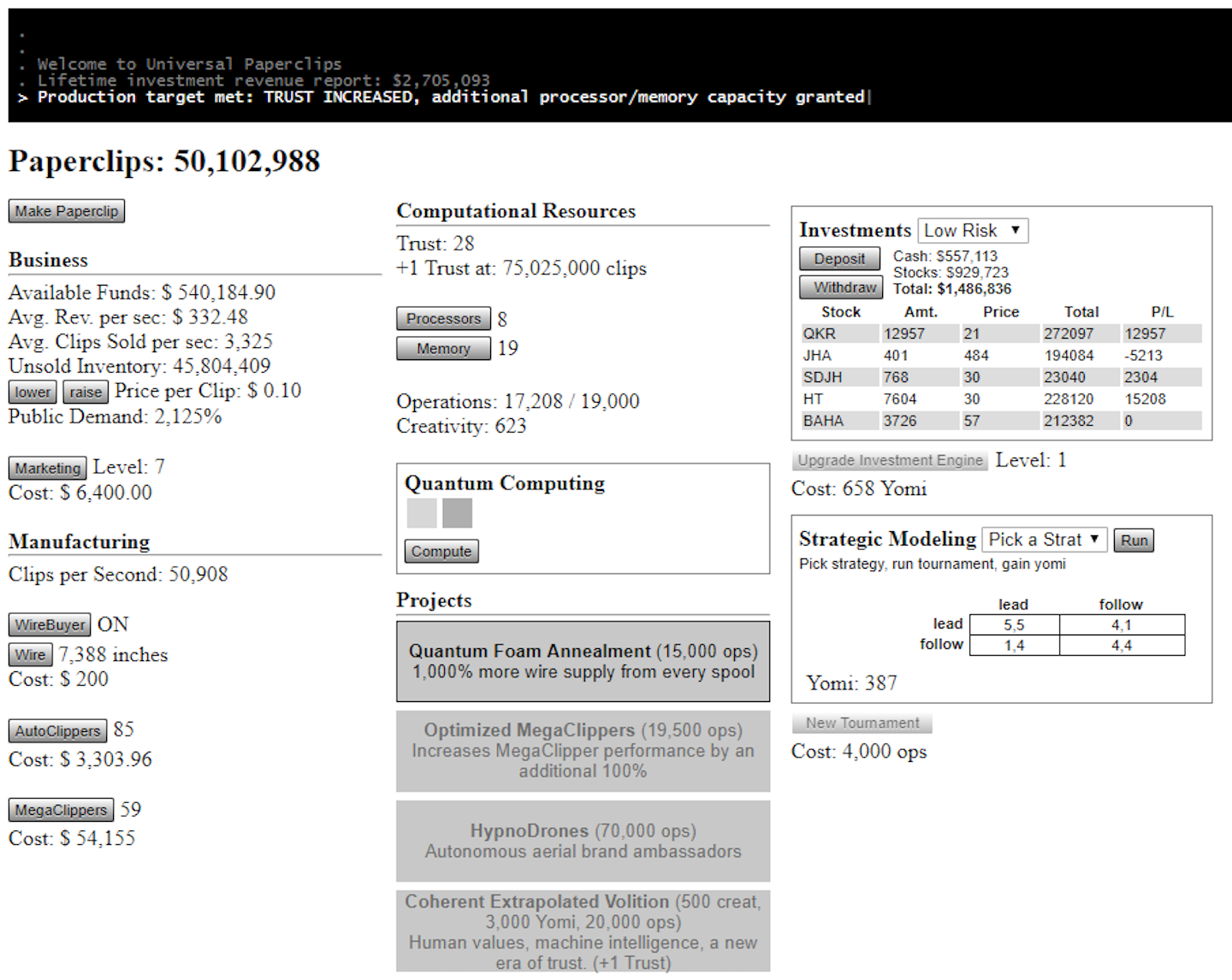 A screenshot from “Universal Paperclips.”

For Frank Lantz, cocreator of Universal Paperclips alongside Hilary Lantz and Bennett Foddy, the discussion of such aesthetic responses was crucial to the game’s success. “It’s deeply social, it’s active, it’s fun, and it’s good,” he said. “It’s the stuff I like the most and I’m excited for games to be—just in the mix more. Less off in their own little world, less just being considered as hedonic appliances that you connect and they give you little trickles of pleasure.”

Of course, there are other ways to avoid the drudgery of New Horizons’ chores than the accelerated automation of Universal Paperclips and other clickers. The Longing, a mix of adventure and idle game (meaning, like some clickers, it continues to run even when closed), arrived a few weeks before Nintendo’s life simulator and shares many of the same elements. Controlling a single character, you can decorate a subterranean home and even create in-game artwork—but, crucially, it takes place over a set 400-day period in real time. As a result, slowness is baked into every aspect of German game maker Anselm Pyta’s title, including exploration of its cave setting, which often depends on ecological phenomena. The moss needed to cushion a perilous drop takes actual weeks to grow, reframing not just what it means to play a video game but whose time frames we should adhere to. Often there is nothing to do but close the game and wait, an act freeing in itself, now more so than ever.

There’s another important distinction: The Longing inverts New Horizons’ insistence on in-game checklists by recording noteworthy disappointments. These might result from unpassable stretches of its cave setting or unopenable doors, each simply a reminder to look beyond achievement for meaning.

In keeping with Animal Crossing’s founding principles, New Horizons is capable of quiet, welcomingly pointless moments—like when I left my avatar to sleep while rain gently tapped its window—but for the most part, it’s been subsumed within a modern mentality of optimization. Games ask us to role-play—that’s part of their fun—whether it’s as an enterprising villager, machine, or lonely creature spending 400 days below ground. But in this moment of downtime, at least for those asked to stay home, we might do well to look beyond New Horizons’ gamified conception of the everyday. Its stultifying islands are not the inspiration we need.