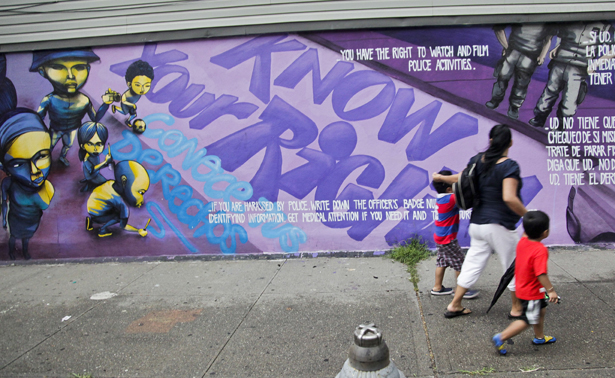 A woman and children walk past a street mural in New York. (AP/Bebeto Matthew)

Because I write about race and racism in the United States, I’m often asked some variation of this question: are things better now?

I don’t mean to be condescending when I answer, but usually my response is frustrated laughter followed by a firm “no.” It’s the most polite thing I can think to do in the moment. At least, it’s more polite than saying, “That’s a stupid fucking question.”

But that’s how I actually feel. It sounds harsh, but I truly believe “Are things better?” is one of the most useless questions in a discussion about racism. It’s another in a repertoire of rhetorical tricks we use in this country to avoid the hard work of addressing racism in its modern form. By reframing the conversation around how much progress has been made, we further the false narrative that racism is a problem that belongs to history. While we pat ourselves on the back for not being as horrible as we once were, we allow racism to become further entrenched in every aspect of American life.

What good is better to Renisha McBride, Trayvon Martin or Aiyana Stanley-Jones? Does better bring back Jordan Davis, Rekia Boyd and Jonathan Ferrell? Do the millions of black youth who experience stop-and-frisk console themselves by noting how much better things have gotten since the 1860s? Is chronic unemployment made better because there are no longer “whites only” signs decorating the South? Will children in Chicago, Philadelphia and DC sleep well at night knowing that even though their schools are closing and their educational opportunities are being ripped away from them, things are better? Does a racist, for-profit, prison-industrial complex really count as better?

That’s what gets swept aside when we focus so much of the narrative of progress. We absolve the evil of racism in its current form. I don’t wish to contend that we should not look back at our history. We should, and often. Nor am I saying we shouldn’t celebrate our progress. There’s nothing inherently wrong with doing so. But I do believe we keep relearning the wrong lesson.

When we look at how far we’ve come, we conveniently omit what got us here: the tireless and thankless work of people with a radical vision of a society based on fairness, the blood of young people willing to die for their right to assert themselves as full human beings, and a mix of compassion and political opportunism that turned powerful people into unlikely allies. And it will likely take more of the same to get us where we need to go.

We delude ourselves into thinking that, with time, things just get better. Insomuch as we’re willing to admit that racism is still a problem today, we conclude that it will no longer be such once older generations die off. At our peril, we ignore how invested we have become in those racist institutions those older generations created. It’s not just a matter of changing attitudes about skin color. We have to be willing to challenge systems of power. So long as we’re caught up in celebrating our “progress,” we neglect the opportunity to do the necessary work required to actually uproot racism and white supremacy.

It may not be true when I tell people who ask that, no, things have not gotten any better with regards to racism. But I’m also tired of having to say “we’ve made a lot of progress” a dozen times in order to get people to listen about the issues that plague us today. But I will stop saying, “No,” as much as I may want to out of frustration. And I won’t be rude and say, “That’s a stupid fucking question.” I will start saying, “Yes, but it really doesn’t matter.”

Mychal Denzel Smith on the murder of Renisha McBride.