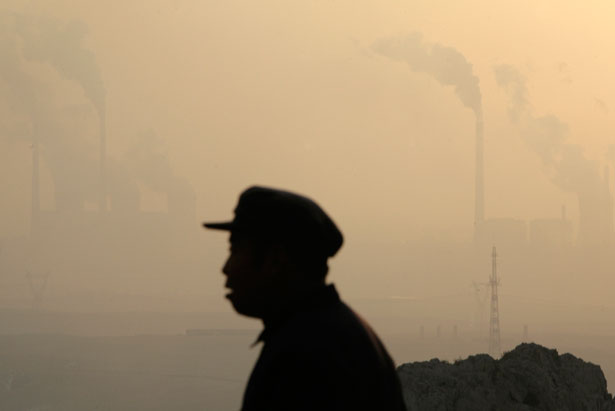 A man stands in front of a coal-fired power plant on the outskirts of Wuhai in China’s northern Inner Mongolia region. (Reuters/Jason Lee)

Ten million dollars a minute. According to the comprehensive account in The Guardian that broke the story of a new IMF study, $10 million a minute is how much the world’s governments are spending to subsidize the burning of coal, oil, and natural gas. That amounts to $5.3 trillion a year in taxpayer money that is intensifying climate change at the very time humanity needs to be reversing it. This $5.3 trillion is also contributing to millions of deaths, heart attacks, asthma cases, and other health effects of local air pollution in the United States and countries around the world. Through the wrongheaded policies of our political “leaders,” we humans are subsidizing the digging of our own graves.

Eliminate these subsidies, the IMF calculates, and you cut global greenhouse gas emissions by 20 percent immediately. That is a giant step toward the 40 percent reductions by 2025 that scientists say are needed for humanity to have a fair chance of limiting average global temperature rise to 2 degrees Celsius. Meanwhile, eliminating these subsidies—which flow overwhelmingly to some of the richest corporations and individuals on earth—would also eliminate the need for further renewable energy subsidies. The market price of fossil fuels would finally come closer to reflecting their actual cost to society, which would further accelerate the already spectacular global boom in solar, wind, and other forms of non-carbon energy.

How to do it, though, that’s the rub. The IMF steers clear of this vexed question, but the answer seems obvious enough: Politics must be committed. Start with the two climate-change superpowers. China is responsible for nearly half of the global subsidies total ($2.3 trillion), mainly because of its subsidizing of coal-fired electricity: Coal is particularly nasty on both the climate and public health fronts. How likely are China’s rulers to phase out those subsidies, how soon, and how would China’s national leaders overcome the resistance of regional bosses and company big wigs? Ditto here in the United States, which boasts $700 billion in subsidies. How likely are the federal and state governments to withdraw billions in subsidies to politically powerful oil, coal, and gas interests?

Nevertheless, forcing this shift is not as hard as it sounds. Most of these subsidies are not monies flowing directly into the coffers of Exxon-Mobil and other fossil-fuel giants. Rather, they represent the healthcare and climate-change costs imposed on society after the fact by the burning of fossil fuels (e.g., the cost to Medicare/Medicaid of heart attacks and asthma cases; the costs to New York City and other coastal cities of coping with the sea level rise that will put JFK and LaGuardia airports underwater later in this century). The way to end these subsidies is to raise the market price of fossil fuels, which will in turn send a message that gives consumers, businesses, and governments an incentive to switch to other, cleaner fuel sources. The end result? Society reduces its burning of the carbon-based fuels that are digging our graves.

But how to raise the market price of gasoline, heating oil, and other carbon-based fuels without inflicting massive economic disruption and the political backlash it would provoke? Easy again: Impose a predictable, rising fee on all fossil-fuel production and return the resulting revenues in equal shares to every American to spend as they like. Sound like socialism? Hardly. Alaska has been doing the same for decades, even when Sarah Palin was governor. The state sends an annual check to all residents as compensation for the costs the Alaskan oil pipeline imposes on the state’s ecology, infrastructure, and other resources.

Legislation to implement such a “tax pollution, pay the people” plan has been introduced in both houses of US Congress. It should be a no-brainer to pass such a measure: Most Americans end up with more money in their pockets (except for the very rich, who are projected to pay somewhat more than currently because they use by far the most energy per capita); millions of deaths, heart attacks, and asthma cases are avoided; and most important of all, we slow and potentially reverse climate change by turning the world economy’s rules of the road decisively against further greenhouse-gas emissions.

You’d think a no-brainer would be perfect for this Congress, but doubtless they’ll have to be dragged kicking and screaming. The IMF, so often the bête noire of intelligent policy-making, has surprisingly provided ammunition.