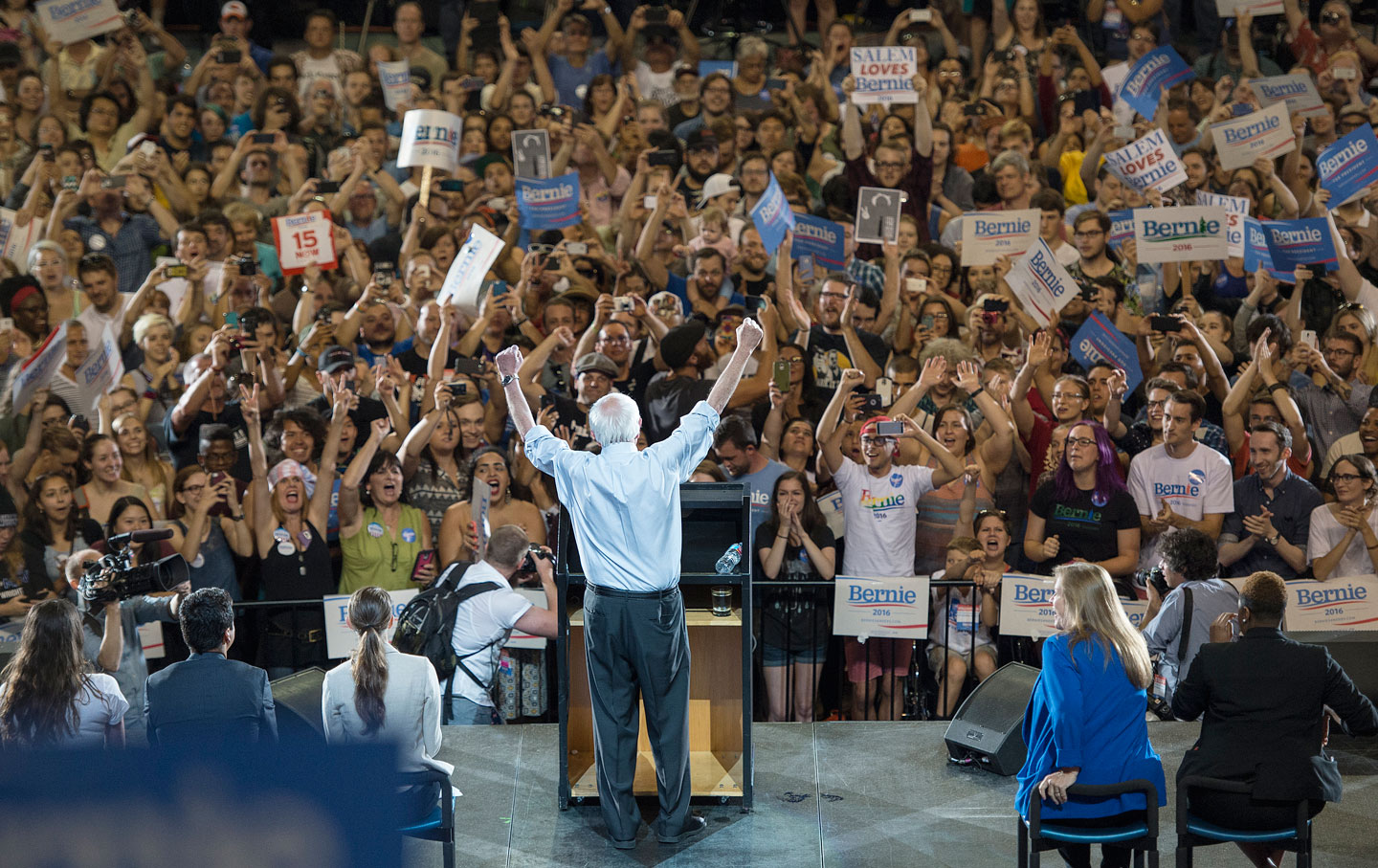 Democratic presidential candidate Senator Bernie Sanders lifts his arms in celebration as he speaks at a rally on August 9, 2015, in Portland. (AP Photo / Troy Wayrynen)

The Working Families Party, a national alliance of state-based progressive political organizations that works with labor, environmental, and community groups to advance an economic and social justice agenda, has endorsed Vermont Senator Bernie Sanders for the Democratic presidential nomination.

The endorsement by the WFP, which has a history of working with progressive Democrats in New York, Connecticut, and other states on electoral and policy projects, and which has built coalitions and grassroots operations in a growing number of states, is the first of its kind for the party. It came after a nationwide vote by party members, which overwhelmingly favored Sanders.

Sanders earned what the WFP described as “an overwhelming super-majority” of 87.4 percent.

“We want to live in a nation that allows all people to live a decent life, no matter what is in their parents’ bank account or who is in their family tree. But the super-rich have used their economic muscle to buy political muscle, and unless you’re one of them, what you think government should do basically doesn’t count,” announced WFP National Director Dan Cantor. “That’s why we’re standing with Bernie Sanders to build the political revolution and make our nation into one where every family can thrive.”

The WFP has a long record of working closely with major unions. So far in the presidential race, Democratic front-runner Hillary Clinton has secured the majority of endorsements from large labor groups (including the Service Employees International Union, the National Education Association, the American Federation of Teachers and the American Federation of State, County and Municipal Employees), while Sanders has been backed by National Nurses United, the American Postal Workers Unions and a number of local union affiliates across the country.

In the WFP membership vote conducted last week, however, Sanders was the clear favorite. The senator earned what the WFP described as “an overwhelming super-majority” of 87.4 percent.

Former secretary of state Clinton, who twice ran for the US Senate from New York with the support of the WFP (which also gave its New York ballot line to Barack Obama in 2008 and 2012), won 11.5 percent. Former Maryland governor Martin O’Malley took 1.1 percent.

The endorsement, which was based both on the membership vote and the votes of the WFP’s national advisory board of state party organizations and affiliated groups, will the WFP says “bring Senator Sanders’ campaign the support of the party’s activist base and skilled operatives.”

Currently, the WFP is active in a number of states, including Connecticut, Maryland, New Jersey, New York, Oregon, Pennsylvania, and Wisconsin, as well as Washington, DC. It has been in the forefront of fights for wage hikes, criminal-justice reform, and paid sick-leave measures.

The WFP endorsement, which was announced Tuesday morning, comes as another progressive group, Democracy for America, is conducting a national vote on whether to endorse Clinton, Sanders, or O’Malley. The DFA vote concludes December 15, and DFA Executive Director Charles Chamberlain says, “If we do endorse in the primary, we’ll work hard for your chosen candidate. But we won’t tear down other Democratic Party candidates in the process. Our goal will be to run a 100 percent positive campaign that will put the nominee in the strongest position to beat Donald Trump—or whomever the Republicans nominate—on Election Day.”