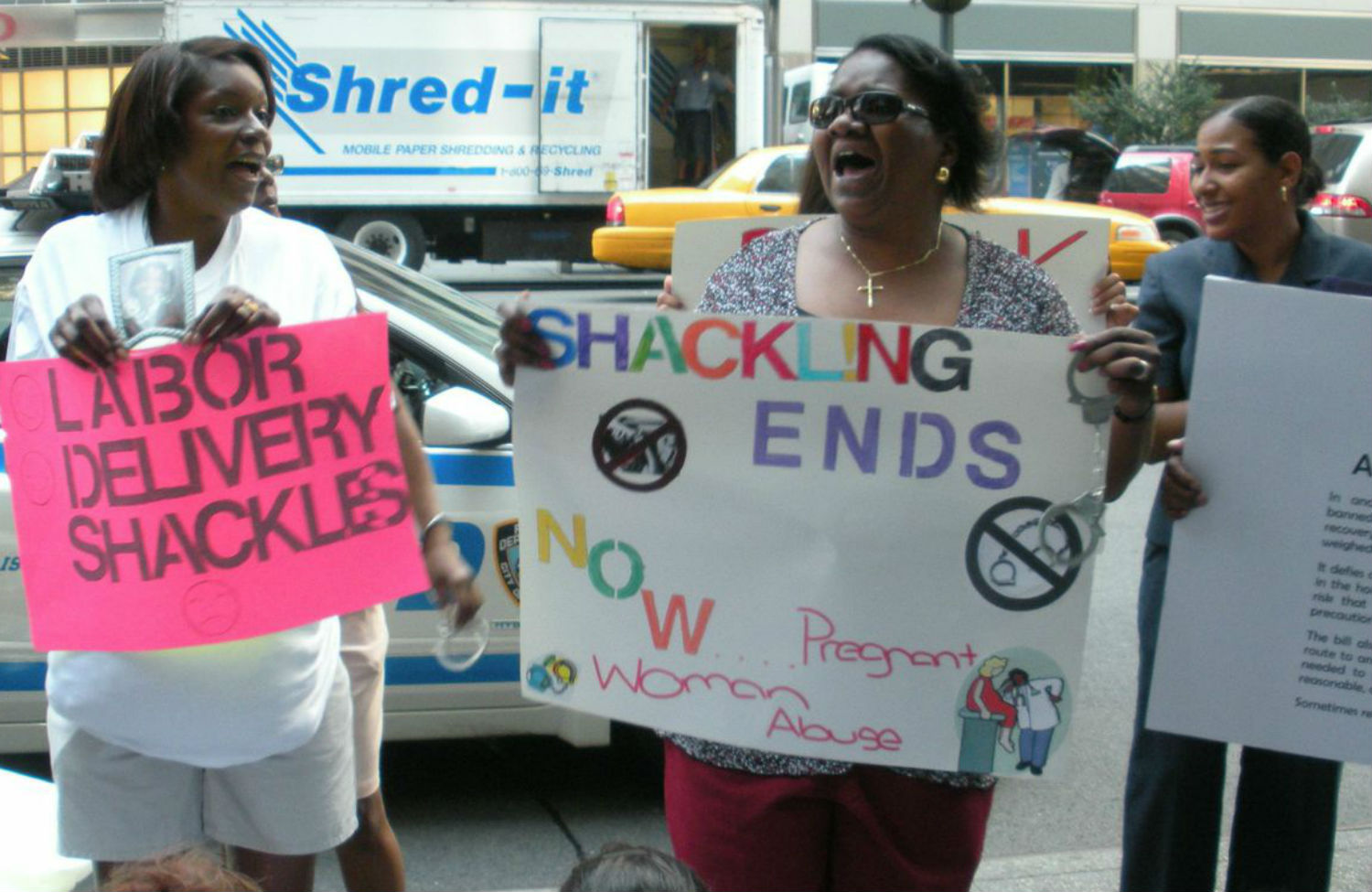 Pregnant women and those who have just had babies in New York state prisons are shackled—despite a 2009 state law that prohibits the use of restraints during labor, delivery and recovery. Women who are not pregnant use newspaper and magazines while on their periods because they are not provided an adequate number of pads. Others face weeks- or months-long delays to see medical providers, and so sexually transmitted infections worsen or cancerous cells spread past the point of being treatable. Others are rushed through appointments and deemed “problem patients” if they ask too many questions, or else forced to discuss the intimate details of a health issue through the door of a solitary confinement cell. Incarceration violates women’s reproductive rights—to say nothing of their dignity and humanity—at every turn. These are among the findings of a report on the state of reproductive health care for women in New York state prisons released this week.

The Correctional Association of New York, an organization that’s monitored conditions in the state’s prisons since 1846 and which produced the report “Reproductive Injustice,” calls it the most extensive study of reproductive health care in a state prison system to date. It’s the product of five years’ worth of investigation into New York’s Department of Corrections and Community Supervision (DOCCS), which provides reproductive healthcare to 4,000 women per year, according to the report. Women make up just 4 percent of DOCCS’s prison population, but because of the upward national trend in incarcerating women—the women’s prison population increased in the US by nearly 900 percent between 1977 and 2013—the study offers a look at the inhumane conditions faced by a growing number of women, the majority of whom are poor and of color.

The report attempts to tell us who women incarcerated in New York are. Seventy percent are mothers. Just over half have a serious or chronic illness. Ninety percent have experienced physical or sexual violence in their lifetimes, and 80 percent were severely abused as children. Three-fourths of the women have survived violence at the hands of their intimate partners. These harrowing statistics help us understand why one of the report’s recommendations is that the state prison system train its medical staff in how to provide trauma-informed care, meaning that staff should learn how abuse continues to affect the women they’re caring for and tailor their approach accordingly. For example, a number of women interviewed said they preferred to be examined by a woman gynecologist, but were given little or no choice in the matter. This despite quotes like this, from the report: “I’ve been raped numerous times, so any type of contact down there makes me feel messed up, but I know I need to be checked.” Among other findings:

—44 percent of respondents who saw a male gynecologist said it made them feel uncomfortable talking about their needs.

—13 percent of women who were pregnant and entered the system during the legal time frame to get an abortion said someone talked to them about their reproductive options.

—85 percent of women who gave birth between 2009, when the law was passed, and 2013, were shackled at least once, in violation of the law.

The challenges faced by the women interviewed are the same challenges faced by women incarcerated nationwide, said Tamar Kraft-Stolar, who directs the Women in Prison Project at the Correctional Association and wrote the report. “This fundamental conflict between reproductive justice and mass incarceration is not something that’s unique to New York,” she said. “We’re hoping that this report contributes to the national conversation that’s happening right now about over-incarceration.”

This broader critique of incarceration is clear throughout the study, which at one point boldly states, “The best solution to the problems outlined in this report is to keep women, especially pregnant women and women with small children, out of prison in the first place.” Instead, the state should look to community-based alternatives to incarceration, the Correctional Association argues, perhaps through policy initiatives similar to what voters in California approved just months ago. In California, shoplifting, drug possession, and four other felony crimes have been reclassified as misdemeanors, meaning less jail time for women convicted of them.

In the meantime, the report is part of an ongoing effort to bring about reforms and improve conditions in New York’s prisons. The Correctional Association is part of a statewide coalition for women’s prisoners that includes more than 100 organizations advocating for policy change. Recent victories include that 2009 anti-shackling law, which the campaign wants to not only see enforced but also expanded to outlaw the use of shackles on women throughout all stages of their pregnancies.

“What was deeply disturbing was the magnitude of violations of reproductive rights that women are going through,” Kraft-Stolar said of producing the report. “It’s really racism and gender oppression that drive society’s tolerance of this extraordinary level of human suffering that happens behind prison walls.”