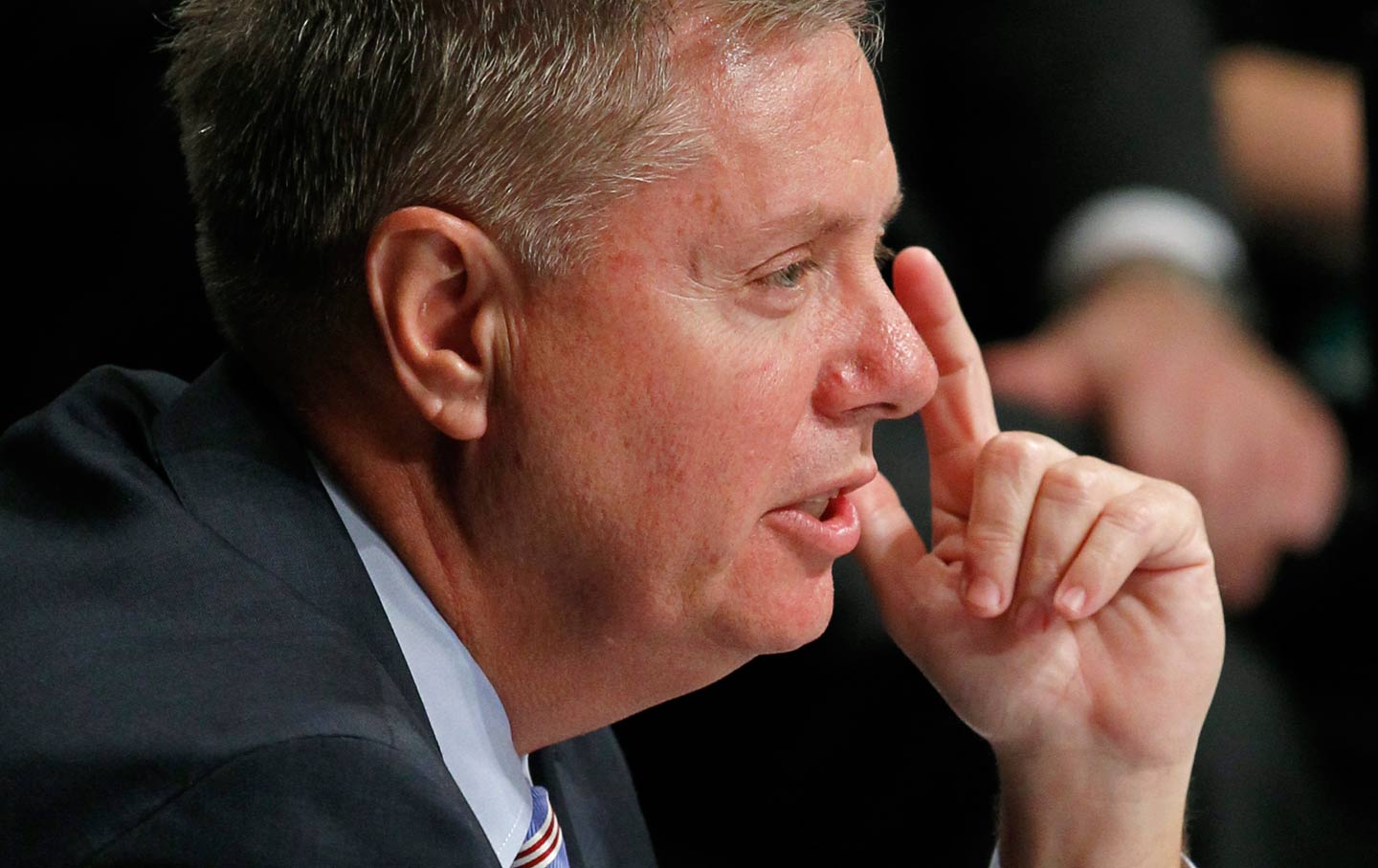 Americans who disagree with Lindsey Graham on virtually every issue can, and should, still recognize that the South Carolina senator’s decision to suspend his 2016 Republican presidential run is a loss for his party and the broader debate.

The senator was the loudest—and often the loneliest—Republican challenger to the absolute absurdity of Donald Trump’s presidential campaign, and to the willingness of other candidates, congressional leaders, and party bureaucrats to aid and abet the blowhard billionaire’s vile rhetoric. Graham dared to say what other Republicans would not, ripping Trump as a “race-baiting, xenophobic religious bigot.”

“Do you know how you make America great again? Tell Donald Trump to go to hell.” —Lindsey Graham

Graham campaigned as a social and economic conservative, and as an overly ardent advocate for military interventions in the Middle East and elsewhere. It was easy to disagree with his responses to a wide range of consequential concerns. Yet Graham would not join Trump in attacking Islam. And he would not let other Republicans off the hook when they failed to call Trump out. Ripping Texas Senator Ted Cruz for his lax reaction to the billionaire’s proposal to bar Muslims from entering the United States, the South Carolina senator said, “This is not a policy debate, Ted. This is about you and us and our character as a party. Up your game. Condemn it, because it needs to be condemned.”

In announcing his exit from active campaigning Monday, Graham said, “I believe we have run a campaign you can be proud of.”

It was a sense of duty that distinguished the South Carolinian from his fellow Republicans.

Other candidates played games, offering tepid rebukes to anti-immigrant, anti-refugee, anti-Muslim rhetoric, or degenerating into their own variations on Trump talk—the lamentable Jeb Bush just dubbed the billionaire a “jerk.” In contrast, Graham was specific and serious in his criticisms. “Donald Trump has done the absolutely worst possible thing you can do as an American political leader, and that’s declare war on the faith itself,” he said last week in a CNBC interview.

In the most recent round of Republican debates, Graham offered a poignant rejection of Trump’s bigotry.

Asked what he would say to Republicans who support the billionaire, Graham said to his fellow partisans:

You may think this makes us safe, but it doesn’t. The good news for everybody in this room is, after 36 trips to Iraq and Afghanistan, most people over there, Wolf, are not buying what ISIL’s selling. This is a religious war between radical Islam and the rest of the world. And there’s only one way you’re going to win this war. Help people in Islam who reject radical Islam to fight over there and destroy this ideology. Donald Trump has done the one single thing you cannot do. Declare war on Islam itself. ISIL would be dancing in the streets, they just believe in dancing. This is a coup for them, and to all of our Muslim friends throughout the world, like the King of Jordan and the President of Egypt, I am sorry. He does not represent us. If I am President, we will work together. People in the faith to all over the world destroy this radical ideology. Declaring war on the religion only helps ISIL.

Graham earned high marks for that statement. But he delivered it not on the main stage of the Republican debates but in a low-profile, low-viewership “under-card” debate. No candidate suffered more from the party’s two-tier debate division than Graham. Even when he got great reviews for his debate performances, it was always as a footnote. His poll numbers never ticked up and he remained an asterisk candidate—running so poorly that his support barely registered in surveys from the first-caucus state of Iowa, the first-primary state of New Hampshire and his own home state of South Carolina.

Graham was a victim of the GOP's terrible two-tier debate division.

As the filing deadline to appear on the South Carolina primary ballot approached, Graham chose not to go forward.

Earlier this month, in a CNN interview, Graham said, “Do you know how you make America great again? Tell Donald Trump to go to hell.”

Now it is Graham who is out. And, with his exit, a dismal Republican race is diminished further still.