Prior to the 2016 election, Eddie Lee Holloway Jr., a 58-year-old African-American man, moved from Illinois to Wisconsin, which implemented a strict voter-ID law for the first time in 2016. He brought his expired Illinois photo ID, birth certificate, and Social Security card to get a photo ID for voting in Wisconsin, but the DMV in Milwaukee rejected his application because the name on his birth certificate read “Eddie Junior Holloway,” the result of a clerical error when it was issued. Holloway ended up making seven trips to different public agencies in two states and spent over $200 in an attempt to correct his birth certificate, but he was never able to obtain a voter ID in Wisconsin. Before the election, his lawyer for the ACLU told me Holloway was so disgusted he left Wisconsin for Illinois.

Holloway’s story was sadly familiar in 2016. According to federal court records, 300,000 registered voters, 9 percent of the electorate, lacked strict forms of voter ID in Wisconsin. A new study by Priorities USA, shared exclusively with The Nation, shows that strict voter-ID laws, in Wisconsin and other states, led to a significant reduction in voter turnout in 2016, with a disproportionate impact on African-American and Democratic-leaning voters. Wisconsin’s voter-ID law reduced turnout by 200,000 votes, according to the new analysis. Donald Trump won the state by only 22,748 votes.

The study compared turnout in states that adopted strict voter-ID laws between 2012 and 2016, like Wisconsin, to states that did not.

While states with no change to voter identification laws witnessed an average increased turnout of +1.3% from 2012 to 2016, Wisconsin’s turnout (where voter ID laws changed to strict) dropped by -3.3%. If turnout had instead increased by the national no-change average, we estimate that over 200,000 more voters would have voted in Wisconsin in 2016.

The lost voters skewed more African-American and more Democrat. For example, Wisconsin’s 2016 electorate was 6.1% more Republican, and 5.7% less Democrat, than the group of ‘lost voters’. Furthermore, the WI electorate was 3.7% more White and 3.8% less African American than the group of ‘lost voters.’ This analysis suggests that the 200,000 lost voters would have both been more racially diverse and have voted more Democratic.

(Priorities USA is a progressive advocacy group and Super PAC that supported Clinton in 2016 and Barack Obama in 2012. The study was conducted by Civis Analytics, a data science firm founded by the chief analytics officer for Obama’s reelection campaign in 2012.)

Though Wisconsin saw the most dramatic reduction in turnout among voter-ID states, it was reflective of a worrisome broader national trend.

The drop in turnout in these six states led to 400,000 fewer votes relative to turnout in states where ID laws did not change. In Mississippi, Virginia, and Wisconsin, strict voter-ID laws had an especially pronounced negative impact on African-American voters.

The study also compared turnout in Wisconsin to Minnesota, which has very similar demographics but no voter-ID law, and found “turnout in African-American counties dropped off at significantly higher levels than in their Minnesota-counterparts.” 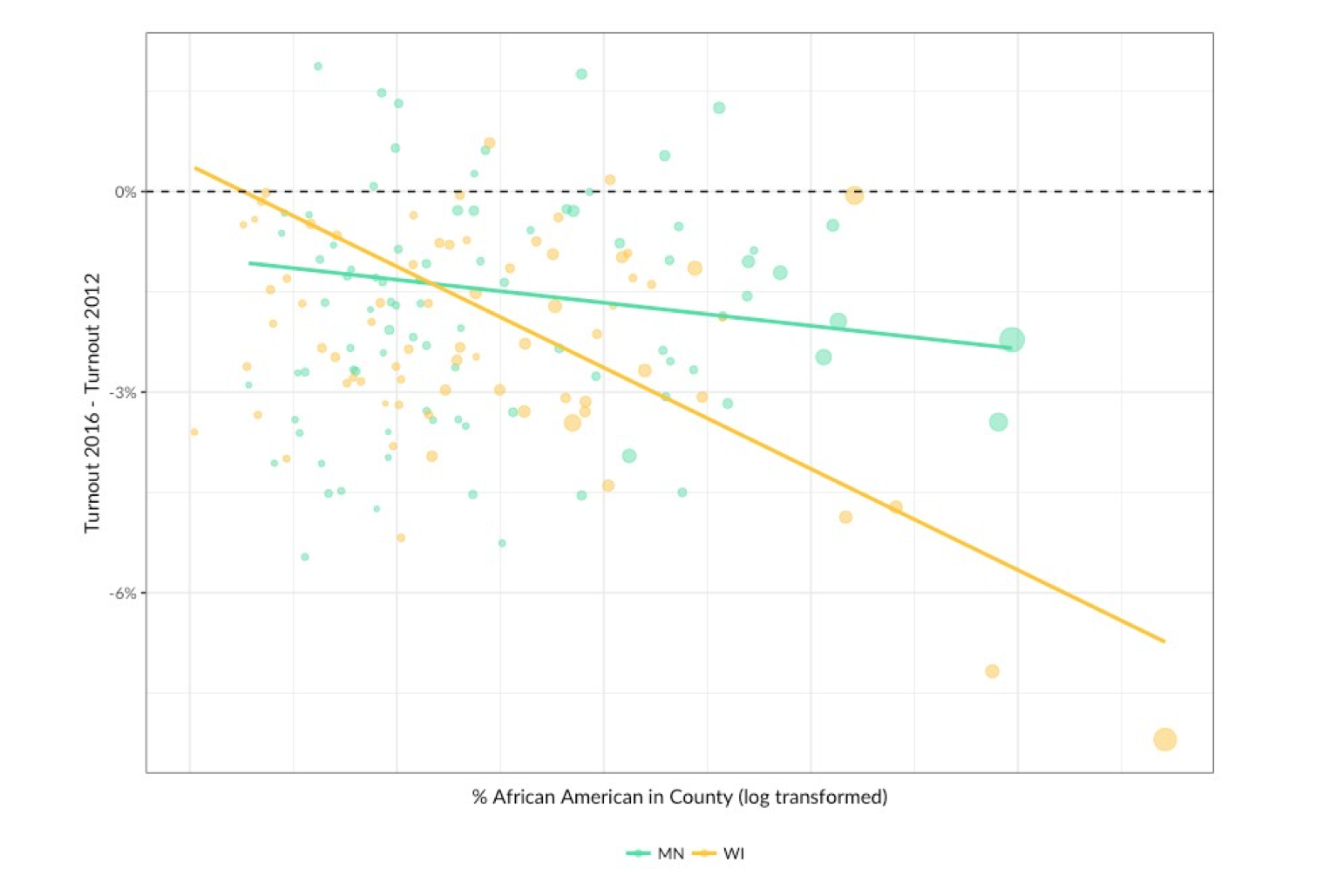 It’s important to note that this study was conducted by a Democratic Party–affiliated group and has not been peer-reviewed or gone through the typical academic vetting process. While some studies have shown big reductions in turnout among minority voters because of voter-ID laws, others have not. But the Priorities USA study is consistent with a 2014 study by the Government Accountability Office, which found that strict voter-ID laws in Kansas and Tennessee reduced turnout by 2 percent, enough to swing a close election, with the largest drop-off among newly registered voters, young voters, and voters of color.

This study provides more evidence for the claim that voter-ID laws are designed not to stop voter impersonation fraud, which is virtually nonexistent, but to make it harder for certain communities to vote. This matters greatly today, because 87 bills to restrict access to the ballot have been introduced in 29 states this year, including voter-ID laws in 19 states. Arkansas and Iowa have already passed strict voter-ID laws in 2017.

“Americans’ fundamental right to vote is under attack by Republican governors and state legislatures around the country,” said Guy Cecil, Chairman of Priorities USA. “Under the false pretense of combating voter fraud, Republicans are passing laws that make it more difficult and time-consuming for average citizens to participate in the democratic process.”

An Attack on Tribal Rights