Madison, WI— Zack Moore, a 34-year-old African-American man, moved from Chicago to Madison last year. He worked at a car wash and then a landscaping job before breaking his leg and becoming unemployed. After staying with his brother, he’s now homeless and sleeping on the streets of Madison.

On September 22, he went to the DMV to get a photo ID for voting, as required by Wisconsin’s strict voter-ID law. He brought his Illinois photo ID, Social Security card, and a pay stub for proof of residence. But he didn’t have a copy of his birth certificate, which had been misplaced by his sister in Illinois, so the DMV wouldn’t give him an ID for voting. “I’m trying to get a Wisconsin ID so I can vote,” Moore told the DMV. “I don’t have my birth certificate, but I got everything else.”

Under Wisconsin law, the DMV should’ve given Moore a credential he could use for voting within six business days. But that never happened. They told him to “drive down there [to Illinois] and get [a birth certificate] and come back.” That would cost Moore money he didn’t have. If he entered what the state calls the ID Petition Process (IDPP), it would take six to eight weeks for him to get a voter ID and he most likely wouldn’t be able to vote by Election Day.

“I’m disappointed in the government,” Moore said after leaving the DMV. “I guess they’re trying to keep people from voting.”

Moore voted in the last two presidential elections and wanted to vote for Hillary Clinton in 2016. “I consider myself a Democrat and I don’t think Republicans are for poor people or minorities,” he said. He was so disgusted with conditions in Wisconsin that he was thinking of moving back to Illinois before the election.

Nine percent of registered voters in Wisconsin don’t have a valid voter ID and many are still struggling to get the documents they need to vote in November. It appears that Wisconsin is violating multiple court orders by not promptly giving eligible citizens free IDs or certificates for voting. This is particularly concerning, since early voting began this week in cities like Madison and Milwaukee and thousands of Wisconsinites are casting ballots.

In an July 29 ruling, US District Judge James Peterson said the IDPP was “unconstitutional” and “pretty much a disaster. It disenfranchised about 100 qualified electors—the vast majority of whom were African American or Latino—who should have been given IDs to vote in the April 2016 primary. But the problem is deeper than that: even voters who succeed in the IDPP manage to get an ID only after surmounting severe burdens.”

He ruled that “Wisconsin may adopt a strict voter ID system only if that system has a well-functioning safety net.” He said the state must “promptly issue a credential valid as a voting ID to any person who enters the IDPP or who has a petition pending.”

Wisconsin claims it is doing this. In a legal filing on September 22, Wisconsin Attorney General Brad Schimel cited a press release from the Department of Transportation stating, “DMV will now be issuing photo identification receipts no later than six business days from receipt of the petition application.” The Wisconsin Election Commissions issued a similar press release saying, “Free Photo ID for Voting Now Available with One Trip to DMV.” The Wisconsin attorney general said, “DMV is carefully administering the process to ensure that anyone who is eligible for the IDPP will have a valid ID for the November general election.”

But recordings from the DMV clearly show this is not the case. Molly McGrath, the national campaign coordinate for VoteRiders, which helps people get voter IDs, accompanied Moore to the DMV and recorded the trip. Read this exchange between her and DMV employees:

Molly: If you initiate the petition process do you get an ID for voting?

DMV Employee 1: No, you don’t get anything.

DMV Employee 2: No, you don’t get anything right away.

Molly: Ok, so even if we start the petition process, and it takes eight weeks, he wouldn’t be able to vote.

DMV Employee 2: Well, I don’t know, they’re working on that. It’s kind of up in the air right now.

…Molly: I thought you could get an ID, like the sign says over there: “No birth certificate, no problem.” You can get an ID to vote.

DMV Employee 3: You can. It just takes the time.

Molly: So even if we just start the petition process, he wouldn’t get anything temporarily that says you can vote?

This is not just a problem in Madison. A volunteer for VoteRiders traveled to 10 other DMVs across the state to see what would happen to a voter who did not have a birth certificate and wanted to get an ID to vote.  DMVs told her “it’s going to take quite a while”  to get the credentials needed to vote and “it’s hard to predict” when that would be.

Several suggested she get a birth certificate on her own.  One said it would be “easier for everyone” to have her purchase a birth certificate from her home state than it would be to use the petition process to get an ID to vote.  Most DMVs did not have IDPP forms readily available, but needed to hunt for them online, in a file drawer, or in a different part of the room.

Overall, only three of 10 DMVs assured her that she would get an ID to vote in a week or less, as state law requires.

“I’m worried there’s not a uniform process in place and it’s extremely unreliable from DMV to DMV,” McGrath says. “And that leaves me uncertain on how to advise voters about getting a voter-ID.”

Legal experts say they’re extremely troubled by the state’s continued failure to fairly enforce the voter-ID law. “Wisconsin has promised the court that voters would be able to get an ID with whatever documents they have,” says Sean Young of the ACLU. “They’ve completely failed to live up to that promise.”

The state keeps frantically changing its procedures to mollify the courts, leading to even more confusion among voters. Last week the Walker Administration proposed issuing “voting purposes only” IDs that could not be used for anything else, like opening a bank account. “The Division of Motor Vehicles also wants the free IDs—born of voter-fraud fears – to be cheapened in quality, with some fraud protections removed,” the Milwaukee Journal Sentinel reported.

“The more they change the procedures, the clearer it becomes that this has nothing to do with voter impersonation,” Young says. “The whole process has no meaning anymore. It’s just a pointless obstacle to the right to vote.”

The US Court of Appeals for the Seventh Circuit struck down an affidavit that voters could sign in lieu of showing strict ID because Wisconsin claimed everyone would get a voter ID who needed one. But that’s not happening. “As we’re seeing on the ground, people are going to be disenfranchised,” Young says. 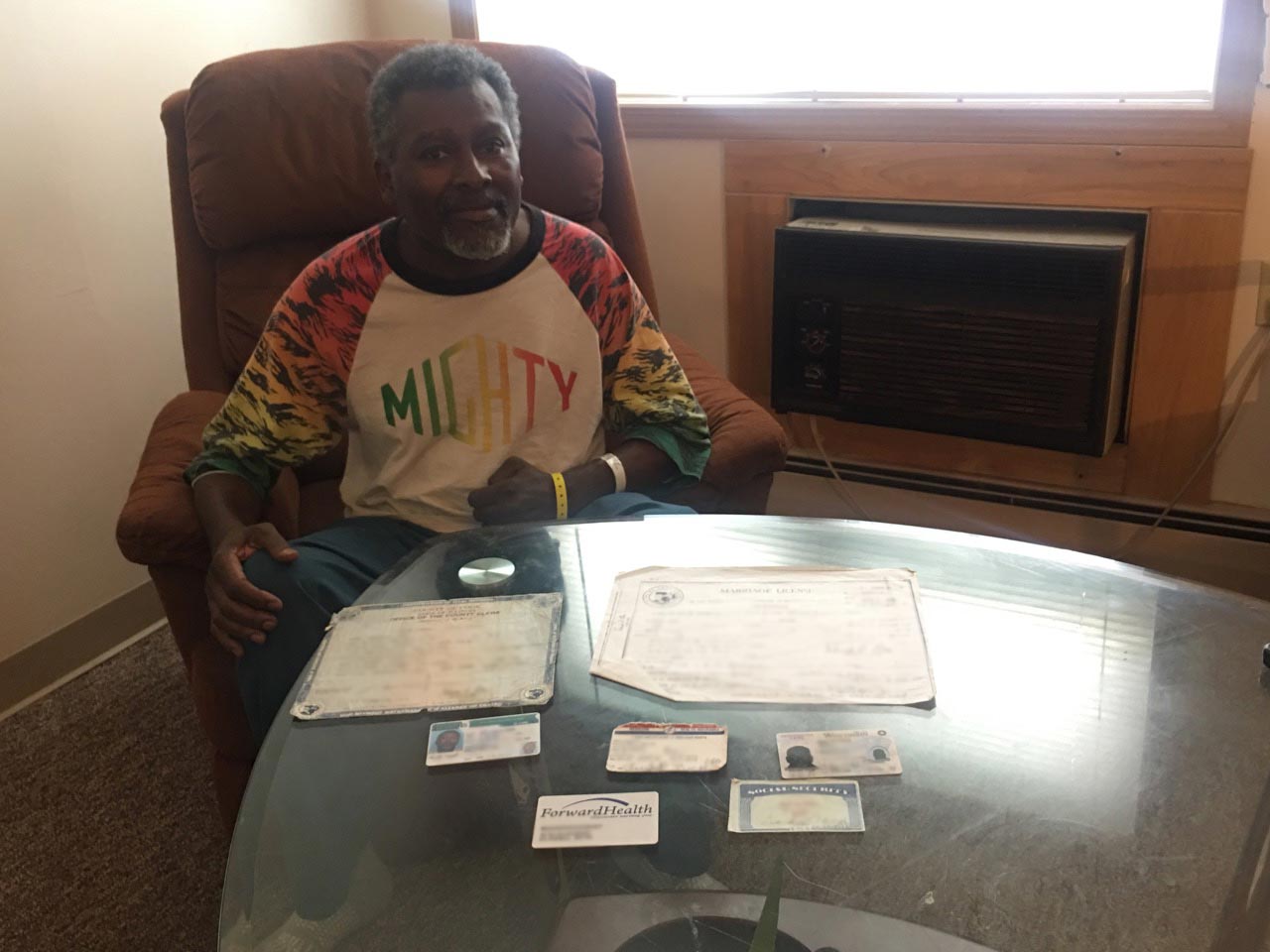 Claudell Boyd with his documents.

Moore’s case is part of a disturbing pattern. Claudell Boyd, a 62-year-old African-American man, moved to Wisconsin last year to escape the violence in Chicago. But because the first name on his birth certificate was spelled Clardell—the result of a mistake caused his mother’s cursive handwriting—the Wisconsin ID he was issued also says Clardell. He made two trips to the DMV to try to fix his Wisconsin ID, bringing his Illinois state ID, Social Security card, and marriage certificate with the proper spelling of his name, but the DMV said he had to go back to Illinois to correct his birth certificate. He was not offered a certificate for voting or enrolled in the IDPP. They said he either needed to change his name or his birth certificate.

“I don’t think that’s fair,” Boyd said. “I don’t think I should have to change my name after all these years just to vote…. I’m going to keep going to the DMV and arguing my point until somebody helps me.” Like Moore, he had voted twice for Obama and said he wanted to vote for Clinton in 2016 because “Trump is not somebody you want to be president.”

His parents were born in Mississippi, at a time when most African-Americans in the state couldn’t vote. Now history is repeating itself up north. “It looks like Wisconsin is making it harder for people like me to vote,” he said.

Is Eric Adams Bringing Back the Asylum?