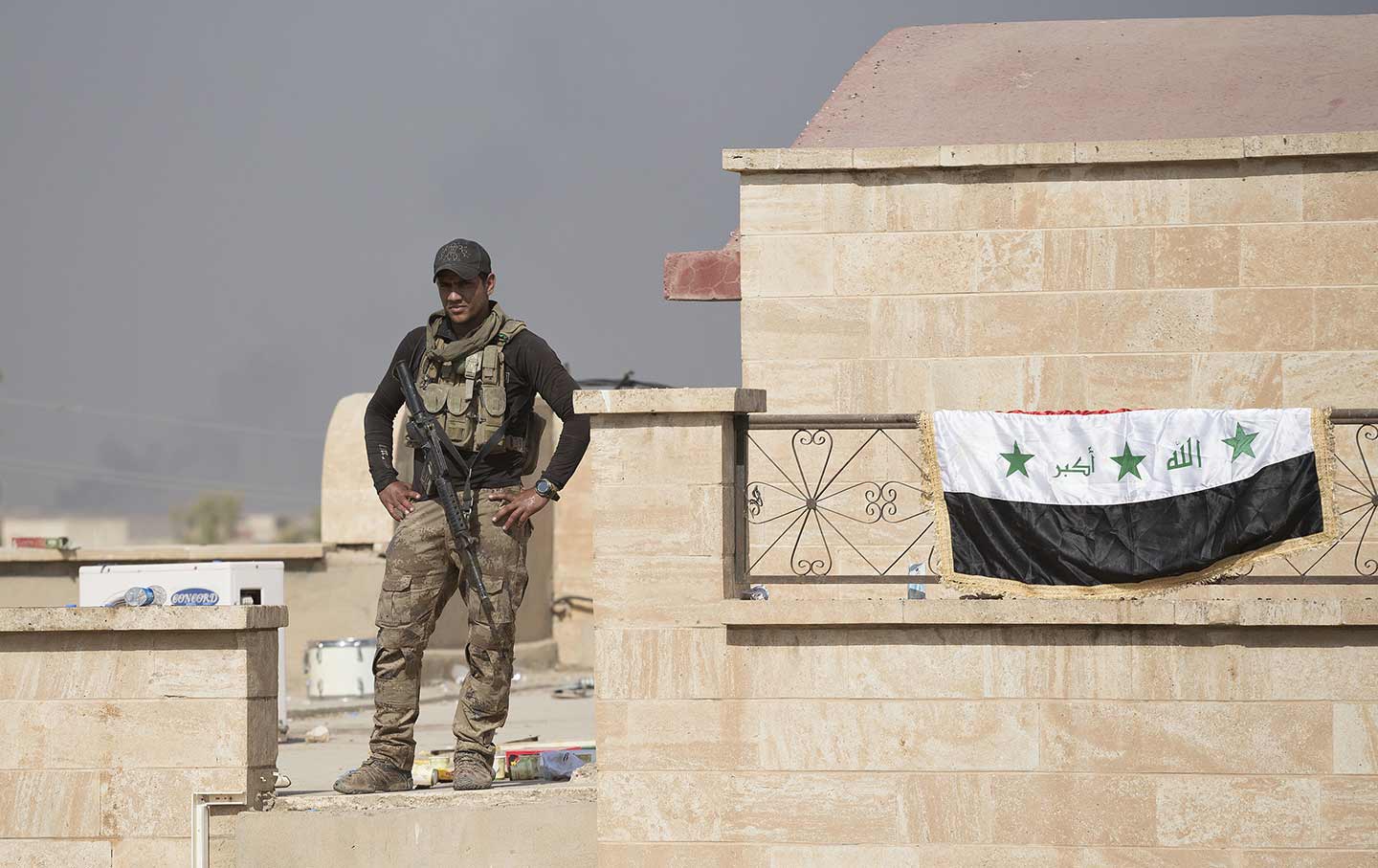 An Iraqi Army Counter Terrorism soldier is seen standing guard on the roof of the Mart Shmony Church in Bartella, Iraq during the battle to retake Mosul, October 23, 2016. (AP Photo / Rex Features)

The optics of the Iraqi government’s Mosul campaign are admitted by all but the most ardent Shiite partisans in Baghdad and Tehran to be bad. The city, once Iraq’s second largest, is largely Sunni Arab, though it has longstanding Christian, Kurdish, and other minority populations. While the ruling ISIL is by now almost universally hated, participation of the Kurdish peshmerga and Shiite militias in the liberation of the city rankles with some Sunni Arabs. Sunni Arabs outside Iraq in the Middle East tend to be protective of Mosul and its inhabitants, playing down any collaboration of city elites with ISIL and insisting that supporters of the terrorist organization are a small minority. As the independent London daily Elaph argues, outsiders are split on whether the Iraqi government’s reconquest of the city will lead to national integration or a breakup of the country.

Nobody has anything good to say about ISIL, however. Throughout the region, columnists directed invective at it. Abir al-Fawzan, writing in the Saudi paper Ukaz, says that “liberating Mosul from these thieves and murderers is a heroic operation.” She says the capture of the al-Nuri cathedral mosque, where ISIL leader Abu Bakr al-Baghdadi first announced his “caliphate” (sort of a medieval Muslim papacy), would roll back the legend of ISIL. Of course, women have special reasons to abhor ISIL, which has practiced human trafficking, sex slavery, and extreme neo-patriarchy on a massive scale.

United Arab Emirates journalist Muhammad Yusuf, writing in Al-Bayan (“Exposition”), blames Shiite Iran for sowing sectarian tensions in multicultural Iraq. Now, he writes, Tehran is preparing Shiite militias “loaded up with hateful religiosity to enter Mosul.” Everyone, he said, is afraid of massacres and ethnic cleansing of the city’s Sunni Arabs solely because of their religion. (In past campaigns, some Shiite militias have committed reprisal killings against Sunnis suspected of collaborating with ISIL.) Yusuf insists that “there are 1.5 million people in Mosul and ISIL is a deviant minority.” Yusuf’s point of view is sectarian; Iraqi Shiites maintain that it is the Sunni Gulf monarchies that have promoted sectarianism and Sunni Arab violence in Iraq.

Mansour al-Jamri, editor in chief of Bahrain’s Al-Wasat (“The Center”), warns that even after the battle of Mosul, the Middle East will be in a more fluid situation than at any time since the imperial powers concluded the 1916 Sykes-Picot agreement during World War I to carve up the failing Ottoman Empire. He says the political process needs to be dealt with “in such a way that it will encompass all the factions in society in an equitable manner, and such that a universal, national identity wins out over ethnic and sectarian ones.” Only far-sighted policy-making on the part of all groups, he says, can forestall a post-Mosul breakup of Iraq. Bahrain newspapers are especially sensitive to Sunni-Shiite conflict, because the tiny Sunni-ruled Gulf kingdom has its own such problems.

Amine Kammourieh writes in Lebanon’s Al-Nahar (“The Day”) that Nineveh Governorate and its capital of Mosul are full of diverse religious and ethnic groups and will fall into reprisals and score-settling. The Shiite militias, he alleges, have an Iranian vision for Mosul, and the Sunni Arab vision is at odds with the Turkish one. At the same time, he writes, “the Kurds do not conceal their attempt to extend their autonomous region” into a region that contains water and petroleum. Lebanon itself was torn apart from 1975 to 1989 by sectarian civil war, and more recently it has seen a fragile sectarian politics. Anyone anticipating post-Mosul Iraq from Beirut would have a hard time being optimistic.

Al Arabiya, a Saudi-owned paper based in the United Arab Emirates, headlines the announcement of Ahmad al-Asadi, spokesman of the People’s Mobilization Forces, or Shiite militias, that those militias will go off to fight for the Syrian regime of Bashar al-Assad after the Mosul campaign. They have just joined the attack on ISIL in that city, attempting to cut it off from the ISIL capital of Raqqa, in eastern Syria. Al Arabiya’s editorial line supports Saudi Arabia, which has committed only slight resources to defeating ISIL but is deeply invested in the overthrow of the Baath regime in Syria as a way of weakening Iran.

Muhammad Akif Jamal has also written a column for the UAE paper Al-Bayan, worrying that after the campaign is over, the Shiite government of Baghdad will again forget and marginalize the Sunni Arab clans in and around Mosul who joined in the campaign to overthrow ISIL. He fears that the Shiite-dominated government of Prime Minister Haider al-Abadi will not follow through on his pledges to arm the Sunni militiamen or allow them to play a major role in the liberation of the city, using them as mere window dressing.

In contrast, Tariq al-Dulaymi insists that the Mosul campaign be seen as a national effort, not a sectarian one. Writing in the left-leaning Lebanese paper Al-Safir (“The Ambassador”), he complains that the battle for Mosul is being distorted in the Arab press by sectarian and ethnic considerations and depicted as though the city were “war booty” for the ethno-sectarian “pirates” of Mesopotamia rather than “the recovery of an Iraqi, Arab city that is essential to the national political geography.”

Dulaymi has a point. For most Arab Iraqis, and most inhabitants of Mosul, the liberation of Mosul has national, Iraqi significance. The Iraqi army collapsed in 2014, and only a few effective brigades have been rebuilt, largely with American assistance. As brave and determined as they have proved themselves in retaking the Anbar cities of Ramadi and Falluja, these Iraqi units could not hope to defeat ISIL in Mosul without the help of the Kurdistan peshmerga, Shiite militias, and Sunni Arab tribal levies. Even a Christian militia, the Nineveh Plains Forces, has joined in the battle.

Outside critics worried about Kurdish expansionism and Shiite militia reprisals, however, do also have a point. Some local Iraqi communities have argued for splitting Nineveh up into a set of ethnic cantons, and for moving to an even looser Iraqi federation. Rather than being defensive and dismissive, Baghdad should refute its internal and external critics by finding innovative ways to reintegrate alienated Iraqis. Otherwise, ISIL will simply re-emerge in a different form.