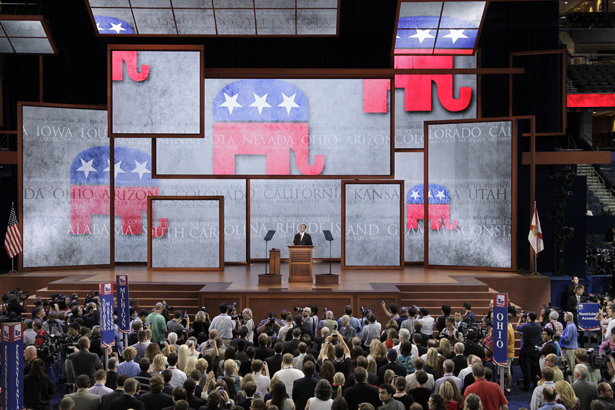 There’s talk, all of a sudden (and not-so all of a sudden) about whether or not the Tea Party can or will break with the Republicans and set up its own, third party. Fearful of another Mitt Romney—or, heaven forfend, Jeb Bush or Chris Christie—and sullen and angry over the well-funded establishment GOP’s ability to outfox their Senate primary candidates so far in 2014, the Tea Party is (or, rather, tea parties are) being touted as having the ability to set up a national third party that represents an anti-establishment, anti-Washington agenda. Don’t believe it for a second.

There’s one strain of thought, expressed last night on MSNBC and last year by David Frum, that the departure of the Tea Party faction from the GOP would be a “blessing” for the Republicans. In Frum’s view, expressed via CNN, the exit of the Tea Partiers would free the Republicans to appeal to centrist and moderate voters (and presumably Hispanics):

Right now, tea party extremism contaminates the whole Republican brand. It’s a very interesting question whether a tea party bolt from the GOP might not just liberate the party to slide back to the political center—and liberate Republicans from identification with the Sarah Palins and the Ted Cruzes who have done so much harm to their hopes over the past three election cycles. … Maybe the right answer to the threat, “Shut down the government or we quit” is: “So sad you feel that way. Don’t let the door hit you on the way out.”

Yesterday, on Fox News, a sputtering, nearly incoherent Sarah Palin, reacting to the defeat of the Tea Party’s extremist standard-bearer in Mississippi—and let’s face it, if the Tea Party can’t win in ultra-reactionary, Bible-thumping Mississippi, it doesn’t have much of a future—said:

Well if Republicans are going to act like Democrats, then what’s the use in getting all gung-ho about getting more Republicans in there? We need people who understand the beauty of…. the value of…allowing free market to thrive. Otherwise our country is going to be continued to be over-regulated, driving industry away, driving jobs away. We’re going to be a bankrupt, fundamentally transformed country unless those who know what they’re doing, and aren’t going along just to get along with those in power, it being today the Democrats. That does no good. So yeah if Republicans aren’t going to stand strong on the planks in our platform then it does no good to get all enthused about them anymore.

But even Rush Limbaugh thinks it’s a dumb idea to create a third party or to abandon the GOP:

I have never advocated for a third party, and I’m not advocating for one now. It’s never been the objective, and it’s just not the way to go. They don’t win. It’s an understandable knee-jerk reaction.

Of course, Rush is right, and Sarah’s off-base, though Democrats and liberals can be forgiven for crossing their fingers and hoping that the civil war in the GOP collapses the party into splinters. For Republicans, their problem is that the activist base of the GOP virtually coincides with the Tea Party, and if that faction leaves, the Republicans will be left with a handful of well-behaved evangelicals and some flag-waving, local Chamber of Commerce types.

Senator Thad Cochran’s defeat of a right-wing kook, Chris McDaniel, in Mississippi’s primary is only that latest in a series of bitter defeats for the Tea Partiers, who’ve now placed their bets on unlikely wins in Tennessee and Kansas. And it’s only heightened the anger and resentment inside the GOP over the establishment’s blitzkrieg against the Tea Party, to the point that in Mississippi some radical-right activists are talking about the unlikely prospect of running McDaniel as a write-in candidate:

Wayne Allyn Root, a libertarian commentator and onetime third-party candidate for vice president who is aligned with the Tea Party, wrote on Twitter that if Mr. McDaniel campaigned as a write-in candidate, “I’ll be in Mississippi campaigning by my friend’s side. Take Cochran down in general election.”

McDaniel, who delivered a fiery, “non-concession” speech after the vote, may encourage such foolishness, which might help elect a Democratic senator from Mississippi for the first time in decades. “There are millions of people who feel like strangers in their own party. And there is something strange, something unusual, about a Republican primary that is decided by liberal Democrats,” he said, angrily. “So much for principle!… This is not the party of Reagan! But we’re not done fighting.”

Over at U.S. News and World Report, there’s this:

Judson Phillips of Tea Party Nation echoed the former Alaska governor, saying that the tactics used by the establishment candidate proves that the “Republican In Name Only”—or RINO—wing of the party is “willing to do anything to hold on to power,” he wrote in a blog post declaring “war” against the establishment wing of the GOP. “The RINO establishment thinks they can use all kinds of underhanded tricks to win. They also think that conservatives will simply accept the results and fall in line,” he wrote. “The Republican Establishment thinks they have fought back an insurrection from conservatives and now we will meekly fall in line in November and support a RINO who needs Democrats to win? Never.”