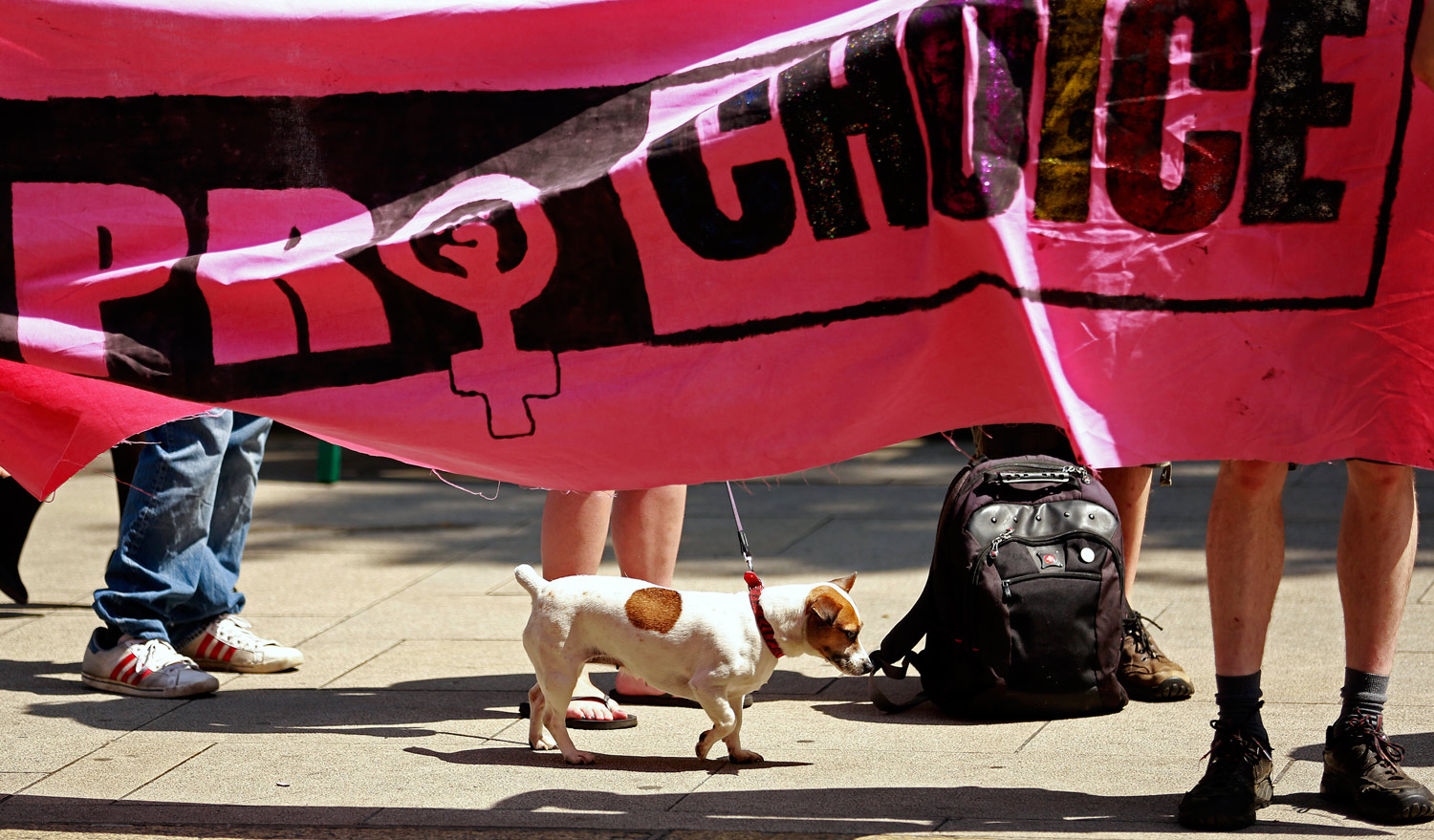 Here’s one way to look at abortion in Ireland: it doesn’t happen, and it doesn’t need to happen, because women can easily take a cheap flight to England and end their pregnancies there.

Here’s another way to look at abortion in Ireland: the penalty for self-abortion is up to fourteen years; the penalty in a recent high-profile Cork rape case was seven years. In other words, a woman who takes an abortion pill she buys illegally on the Internet after being impregnated in a sexual assault could face twice as much prison time—or more—as her rapist.

Last year, after much uproar and in the teeth of the Catholic Church, the Irish Parliament passed a law permitting abortion when there is a “real and substantial risk” to a pregnant woman’s life. Better late than never: it had been twenty-one years since the constitutional court directed the government to formalize policy on life-saving abortions. That ruling had come in the wake of the case of Miss X, a 14-year-old rape victim who became suicidal after the government barred her from leaving the country for an abortion. (A court eventually allowed her to leave.) It took another tragedy to force the issue: the horrific 2012 death of Savita Halappanavar, who died of septicemia because doctors refused to complete her protracted miscarriage as long as the fetus had a heartbeat.

This very narrow law leaves Ireland in the company of some fifty countries where abortion is totally or almost totally banned: there are no exceptions for rape, incest, grave risk to the woman’s physical health (let alone mental health) or serious fetal defect, even fatal ones. While the legislation includes suicide as a risk, a woman who claims suicidality must be approved by a panel consisting of two psychiatrists and an Ob/Gyn, who must find unanimously in her favor (if rejected, she can appeal to a fresh panel).

Yet, perhaps surprisingly, when I visited Dublin in March, the pro-choice activists I interviewed were cautiously hopeful.

“The church has deep, entrenched power,” Katie Gillum, a filmmaker and co-convener of the Abortion Rights Campaign, told me when we met for coffee at a small cafe near Ha’penny Bridge, “but that doesn’t match the level of respect or faith among the people.” (My Tom Friedman–esque encounters with taxi drivers bore that out—four out of four of these chatty middle-aged gentlemen had left the church.) Ireland is changing fast, she pointed out: people are better educated than a few decades ago, and far more prosperous, urban and cosmopolitan. Indeed, on my way to our meeting, I passed a number of shop and restaurant windows with signs that read We Are #TeamPanti—a reference to Rory O’Neill, who performs in drag as Panti Bliss, and whose stirring speech from the stage of the Abbey Theatre attacking homophobia has made him a household name. (Ireland is due to vote on marriage equality next year, and prospects look good.) Another marker of change: in 1980, only 5 percent of Irish babies were born out of wedlock; by 2006, it was 33 percent.

Polls show majorities, especially among the young, in favor of at least some liberalization of the abortion law, but that would require a referendum to overturn the Eighth Amendment to the Constitution, which bans abortion and equates the life of the “mother” with that of an implanted fertilized egg. There’s massive organizing work to be done to solidify those majorities, and ironically, one obstacle is the prevalence and perceived ease of abortion travel. “Many women end up traveling their way to access,” Katie told me. “But what about the ones who don’t have 1,000-plus euros, or whose legal status or family duties make travel impossible?” At least 4,000 women go abroad each year to end a pregnancy—and that’s counting only the ones who give an Irish address at the clinic. The true number is probably quite a bit higher. But the news media rarely discuss traveling, and the stigma keeps most women quiet. “A person who’s about to travel won’t talk about it.”

Cathleen, a founding member of the Abortion Rights Campaign (she asked to have her last name withheld), is one of the few who will. As she told me by Skype when I returned to the States, she went to Liverpool for an abortion last year, when she was 27. It’s not as easy as it sounds. “I found out I was pregnant at seven weeks, but because I needed to raise the money, I had to postpone the abortion till I was almost fourteen weeks pregnant. There’s a horrible pageantry where you pretend you are going on vacation. I couldn’t tell my boss or my friends. You don’t want to deal with people’s pity.” Or worse: when her father found out, he called her a murderer.

There are medical issues about abortion travel, too. “It means women are having their abortions later,” Dr. Tiernan Murray told me when I met with him and some other members of Doctors for Choice in their office near Parnell Square. “It’s more stressful, because they’re unsupported and far from home. And medication abortion isn’t really an option for them,” because it would mean staying longer in Britain. “There’s a lot of self-censorship here, including among doctors,” said Dr. Murray, “but today the majority of GP trainees are pro-choice.”

“The government thinks it’s progressive and modern, but on this issue we’re a third world country, right up there with Nicaragua,” added Dr. Veronica O’Keane, a psychiatrist and professor at Trinity College who has put her name forward to sit on the panels set up by the new law to evaluate claims of suicidality. “The people are ahead of the politicians.”

“We’re definitely going to win,” said Dr. Murray. “The only question is when.”

Help women in Ireland travel to England for their abortion care with a donation to the Abortion Support Network: abortionsupport.org.uk.