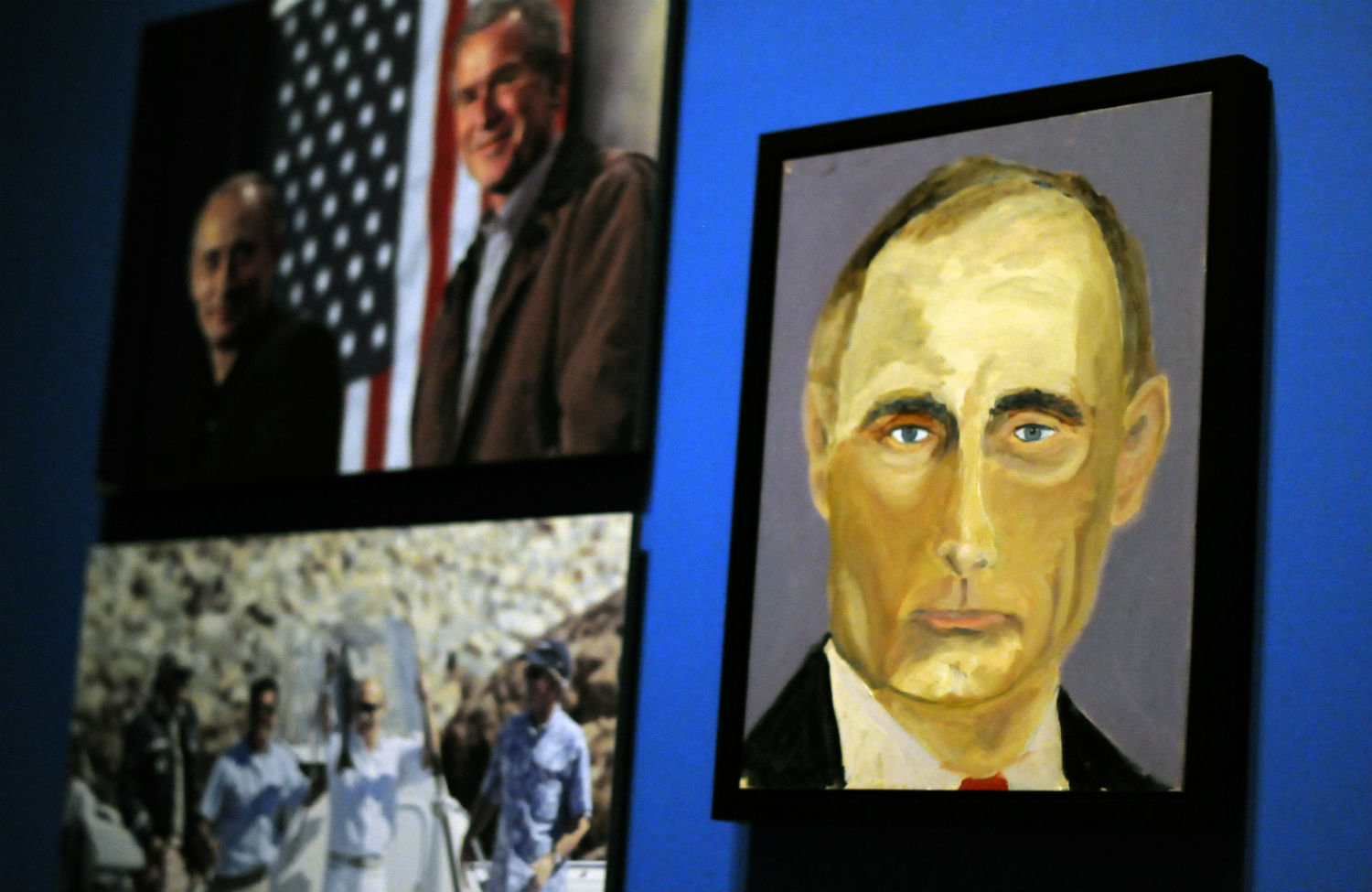 A portrait of Russian President Vladimir Putin, painted by George W. Bush as part of his exhibit, “The Art of Leadership: A President”s Diplomacy“ (AP Photo/Benny Snyder)

The Onion News Network was always the best place to look for an honest review of George W. Bush’s post-presidential painting hobby, and here it is at last—including an analysis of the “ghost of an Iraqi child that follows him everywhere” that should be in every painting but, sadly, is usually replaced by a puppy dog or an impersonal caricature of some foreign leader’s Google photo.

It’s hard to tell which is funnier: the paintings themselves (the Onion artist who copied Bush’s primitive style captures his flat planes and between-the-lines coloring practice), or the upbeat chit-chat of the Onion News host and correspondent, who perfectly mimic the mainstream media’s happy-talk accounts of Bush’s surprising hobby.

Showing one morbid painting after another, the host says, “You can see that Bush’s art is improving over time. At first he could barely draw the Iraqi child’s transparent hands, but now they look much more realistic!” George and Laura are shown smiling in one work, and seem not to notice that W is holding the bleeding, dead Iraqi child in his arms.

This is, of course, the opposite of what Bush’s paintings really do, as they tend to hide things about the ex-POTUS rather than reveal them. Just as his self-portraits in the shower cover up his private parts, Bush would rather paint Putin or a Saudi noble than one of his own controversial lieutenants, like Cheney or Rumsfeld. That would be getting too close to home.

The Onion paintings get grislier and grislier. One depicts Bush’s bedroom at the Crawford ranch splattered in blood with Manson-like zeal. “Laura Bush says he’s more focused than ever, locks himself away for hours at a time and won’t talk to anyone while he’s painting,” the host says.

It’s more or less what many of us have imagined: that George Bush is going quietly bonkers after years of repressing the reality of what he’s done. In real life, however, Bush paints to forget, not to expose.

Watch the Onion video below (and a similarly themed video from cartoonist Mark Fiore here):