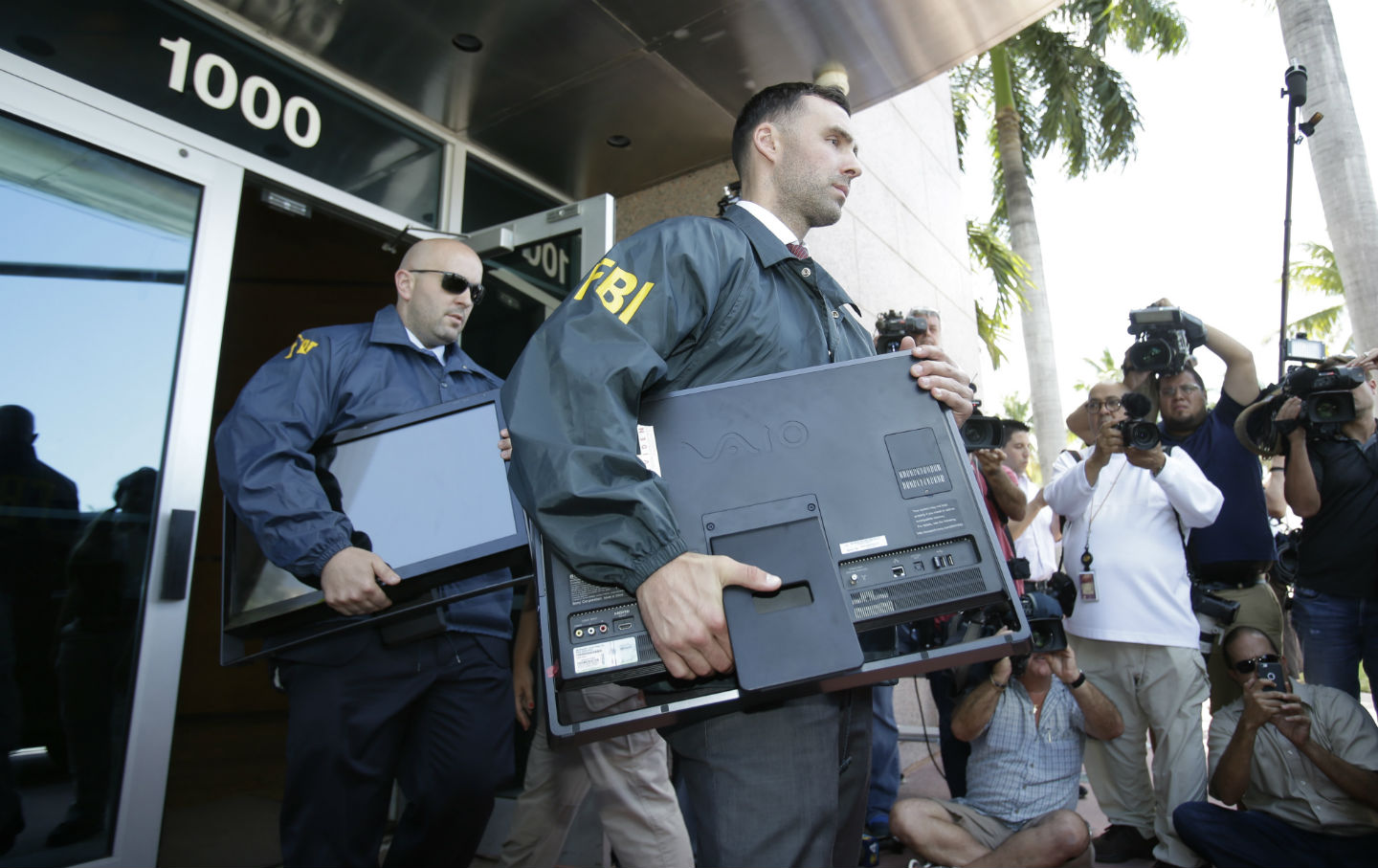 Federal agents load a van with boxes and computers taken from the headquarters of CONCACAF. (AP Photo/Wilfredo Lee)

As the 2015 FIFA Congress remains roiled in disarray following the dramatic arrests of leading officials on corruption charges, the Palestinian Football Association is not deterred. The PFA is still moving forward with a Friday vote to suspend the Israeli Football Association unless it pledges to push its government to cease the detentions, imprisonments, and targeting of Palestinian players and clubs (here is a comprehensive list of their concerns). As PFA President Jibril Rajoub said, “Nothing has changed, the vote is still on the agenda.”

After a meeting with embattled FIFA chief Sepp Blatter, long desperate to avoid such a vote, as well as Arab and Israeli authorities, Rajoub said, “The meeting lasted about one hour, there were no results.”

Whether Rajoub is able to get this vote on the agenda given the chaos engulfing FIFA at the moment is a real concern that should in no way be discounted, but that doesn’t mean the recent high-profile arrests don’t also present opportunities for campaigners. Before seizing them, however, there is a need to first cast away the rampant theories that the US Justice Department’s transatlantic criminal sting was somehow timed to aid Israel. The much-trafficked belief is that the United States facilitated the timing of this operation in its efforts to help its greatest ally to avoid the humiliation of becoming the first country since apartheid South Africa to be suspended by FIFA. Surely the fires of such thoughts were stoked by editorials in The Jerusalem Times crowing that the arrests “couldn’t have come at a better time for Israel.”

But, typical of the Jerusalem Times editorial page, this makes little sense. It also ignores the ways in which the spotlight on FIFA has only grown in the last 48 hours, providing new leverage for those who want to make the soccer congress an arena to actually confront human-rights abuses instead of facilitating them.

The idea that a United States Justice Department that can’t even get its attorney general approved for six months, could pull off a multi-year, multimillion-dollar transatlantic sting operation with the perfect timing to stymy a vote whose existence was in doubt even days ago is to put it mildly, unrealistic. But even more pertinently, with these arrests the US Justice Department and Swiss authorities just gutted the North American delegation, the group most likely to support and lobby for Israel at the FIFA Congress. This would be like dropping Steph Curry on his head as part of a master plan to help the Warriors win the NBA title.

Another reason these arrests don’t help Israel is that the reptilian Blatter has been staunchly in the IFA’s corner, and ferociously working to get the Israel vote off of FIFA’s agenda. Until more pressing matters emerged, it was at the top of his to-do list. Now, in the wake of the arrests, Blatter’s political capital has been eroded dramatically, his ability to broker anything beyond the weekend’s catering very much a question.

The idea that these arrests were timed to aid Israel also makes little sense because now the eyes of the world are on the FIFA Congress, an event, which in years past only the most die-hard of soccer dorks even noticed. Now every move will be under a microscope. If the goal of the Palestinian Football Association was to raise international awareness of the plight of its players, it could not have asked for a better stage. This vote against Israel was never going to pass. It would have required 75 percent of delegates to approve Israel’s suspension and not even the most optimistic vote counters believed that this could happen. But now there is global attention and, given the plight of Palestinian players, the more attention the better for their human rights to be recognized.

Once again the shell-shocked madness could very well create a situation where the vote is scuttled, and that would crush many campaigners. But this could also reap awareness of the hardships that surround the life of an up-and-coming soccer player in Gaza, as well as the ways that the IFA launches official soccer teams on West Bank settlements to further erode the possibilities of a separate Palestinian state.

My own concern, as someone who has written and spoken out for the besieged players in the West Bank and Gaza Strip, is that these theories of US-Israeli coordination are just fatalism in disguise: the idea that no matter how much people organize, there will always be an elaborate transatlantic sting ready to wreck the work. That’s not what happened. These arrests are foremost about FIFA buckling under the weight of its own corruption. This is about a history of graft, human rights abuses, and contempt for any law but his own catching up with Sepp Blatter. This is the Enron of sports. I agree with Andrew Zimbalist, author of Circus Maximus: the Economic Gamble Behind Hosting the Olympics and the World Cup, who said to me, “FIFA executives have run an almost unimaginably corrupt organization. Sepp Blatter has been the grand choreographer, chief enabler, prime instigator and main beneficiary of this system since 1998. It is now time to take down Blatter himself.”

If there are any questions worth asking about these arrests, it is whether the Justice Department would have undertaken such action if the United States instead of Qatar had been awarded the 2022 World Cup (no). I’d also like to know why the Qatari World Cup Committee—a group of slavers with the blood of hundreds of workers on its hands—gave hundreds of thousands of dollars to the Clinton Foundation, even as Bill Clinton was leading the US World Cup bidding delegation. But as for Israel, my own concern is that in searching for conspiracies of coordination, activists will only find fatalism and fantasy: the idea that no matter what they do, it will be for naught. The PFA has not succumbed to this kind of fatal fantasy. We should not either.