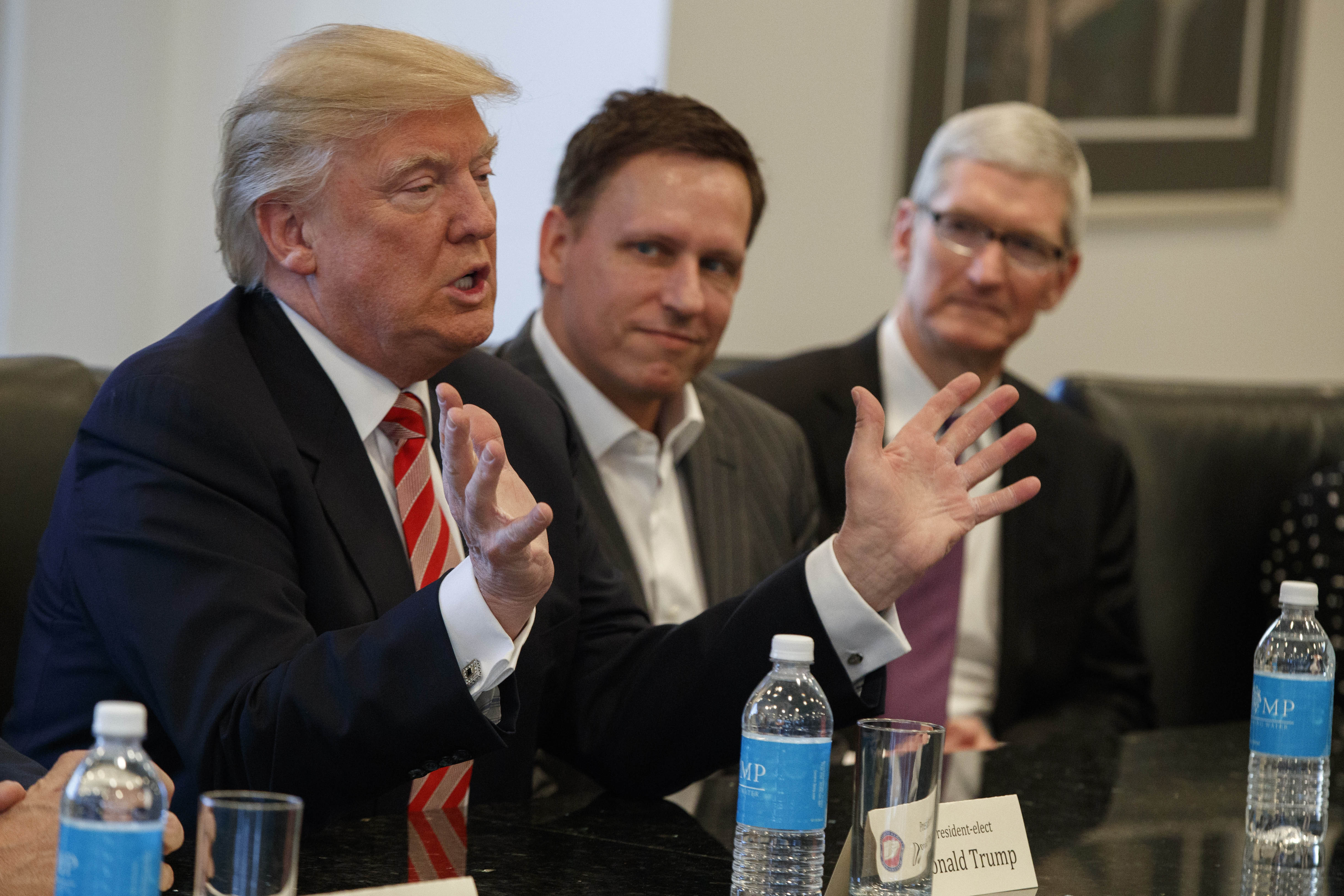 In 2014, Peter Thiel—the man who would become Donald Trump’s Silicon Valley consigliere—wrote a Wall Street Journal op-ed entitled “Competition is for Losers,” extolling the virtues of corporate monopolies and explaining why competitive markets are overrated.

Thiel was ahead of his time.

While Trump promised to combat concentrated economic power on the campaign trail, he has since positioned himself as one of the most pro-monopoly presidents in history. On January 4, his team selected Jay Clayton—a Wall Street mergers and acquisitions attorney who specializes in corporate consolidation—to head the SEC. Recently, a top Trump adviser signaled approval for the proposed AT&T/Time Warner merger, writing in The New York Times that there’s basically nothing wrong with “a high level of concentration in an industry.” And the president-elect himself has been playing nice with the CEO of Sprint, just as the company seeks approval for a controversial merger with T-Mobile.

As Trump takes to Fox News to attack the “dumb market” and Mike Pence embraces economic nationalism, it’s now clear that the leaders of GOP have adopted Peter Thiel’s perspectives on competition and concentrated power. While the word “competition” was once as revered on the right as “patriotism,” “liberty,” or “family,” conservatives are now ceding it to progressives like Elizabeth Warren and Bernie Sanders, who are increasingly focused on fighting monopoly power and restoring competitive markets.

In June, Warren delivered a major speech entitled “Reigniting Competition in the American Economy” that laid out the essence of her economic philosophy: Over the last three decades, a trend of corporate consolidation has created an unprecedented concentration of power in the economy and undermined the functioning of markets. Just about every industrial sector—think airlines, agriculture, telecoms, and beyond—has been consolidated under a small number of corporations with growing power to set prices and fix the rules of the game.

Over the last decade, the number of major US airlines fell from nine to four. Five insurance giants now control over 83 percent of the country’s health-insurance market. Three companies control 99 percent of the drug stores in the country. One company sells roughly 80 percent of corn seeds and more than 90 percent of soybean seeds. After decades of steady consolidation—and despite financial reform—several of the country’s biggest banks are officially “too big to fail.”

Rising consolidation and declining competition get to the heart of what’s wrong with our economy—fueling the complaints of Clinton and Trump voters alike.

When corporations devour their rivals rather than competing with them, the nation’s workers and consumers have fewer choices. This means more cash for some executives and shareholders, but it generally means higher consumer prices, lower wages, threats to the quality of products and services, stifled innovation, and entrenched political power.

Comcast’s consolidation of the cable market, for example, has been good for the company’s bottom line, but it’s had serious negative impacts on cost and quality. Americans now pay far more for cable and Internet services than consumers in other industrialized countries, and we get worse service.

Wal-Mart’s domination hasn’t just destroyed small businesses or hurt wages and working conditions in the retail sector. It’s also hurt the suppliers who make the products—forcing them to reduce their own wages and often cut back on quality so that they can remain in business with the behemoth.

While monopoly advocates like Peter Thiel talk about the importance of technology and entrepreneurship, the evidence shows that market consolidation undermines these ideals by reducing the incentives to innovate and creating barriers for new market entrants. According to research at the New America Foundation, the number of start-ups fell 53 percent in the years between 1977 and 2010 when the country stopped seriously enforcing antitrust laws.

Declining competition increases the risk of crisis. The failure rate for banks with assets of more than $1 billion was seven times greater than for lower-asset banks. As Warren put it, “Concentrated markets create concentrated political power.” The bigger monopolists get, the more resources they can spend on lobbying government to change the rules or protect their advantages. This is how fossil-fuel companies and utility monopolies thwart action to mitigate climate change or how the biggest banks avoid rules that undermine their riskiest practices.

This isn’t supposed to be a partisan issue. The idea that monopolies are bad for an economy goes all the way back to Adam Smith, who saw how the British East India Company destroyed producers. Friedrich Hayek, the godfather of laisse-faire economics, was adamant that monopolies are not only a threat to markets but also to human freedom.

While Republicans have been skeptical of antitrust enforcement since Robert Bork came on the scene in the late 1970s, Democrats have been part of the problem too. Bill Clinton took antitrust out of the party platform in 1992, and, only in 2016—with a push from Bernie Sanders—was the plank restored.

For Democrats, competition policy is an opportunity to do some jiu-jitsu on Trump. The president-elect built his Rust Belt appeal by railing against hyper-concentrated political and economic power. Progressives, unlike the incoming administration, can demonstrate to these voters that they will actually do something about it.

Democrats have had a hard time explaining complex policies like Obamacare and Dodd-Frank to the public. By focusing on concentrated economic power, Democrats can—in the tradition of the trust-buster Teddy Roosevelt—keep it simple. As Warren described, the party can build a clear economic platform on efforts to “prevent cheating, protect taxpayers, and maintain competition.”

In his Wall Street Journal op-ed, Thiel makes the argument that “capitalism and competition are opposites.” He explains that “Capitalism is premised on the accumulation of capital, but under perfect competition, all profits get competed away.” It’s fitting that Thiel is an economic guru to Trump—a man whose only real ideology has been the relentless pursuit of profit.

It’s up to Democrats to present a different view of how markets can and should work.