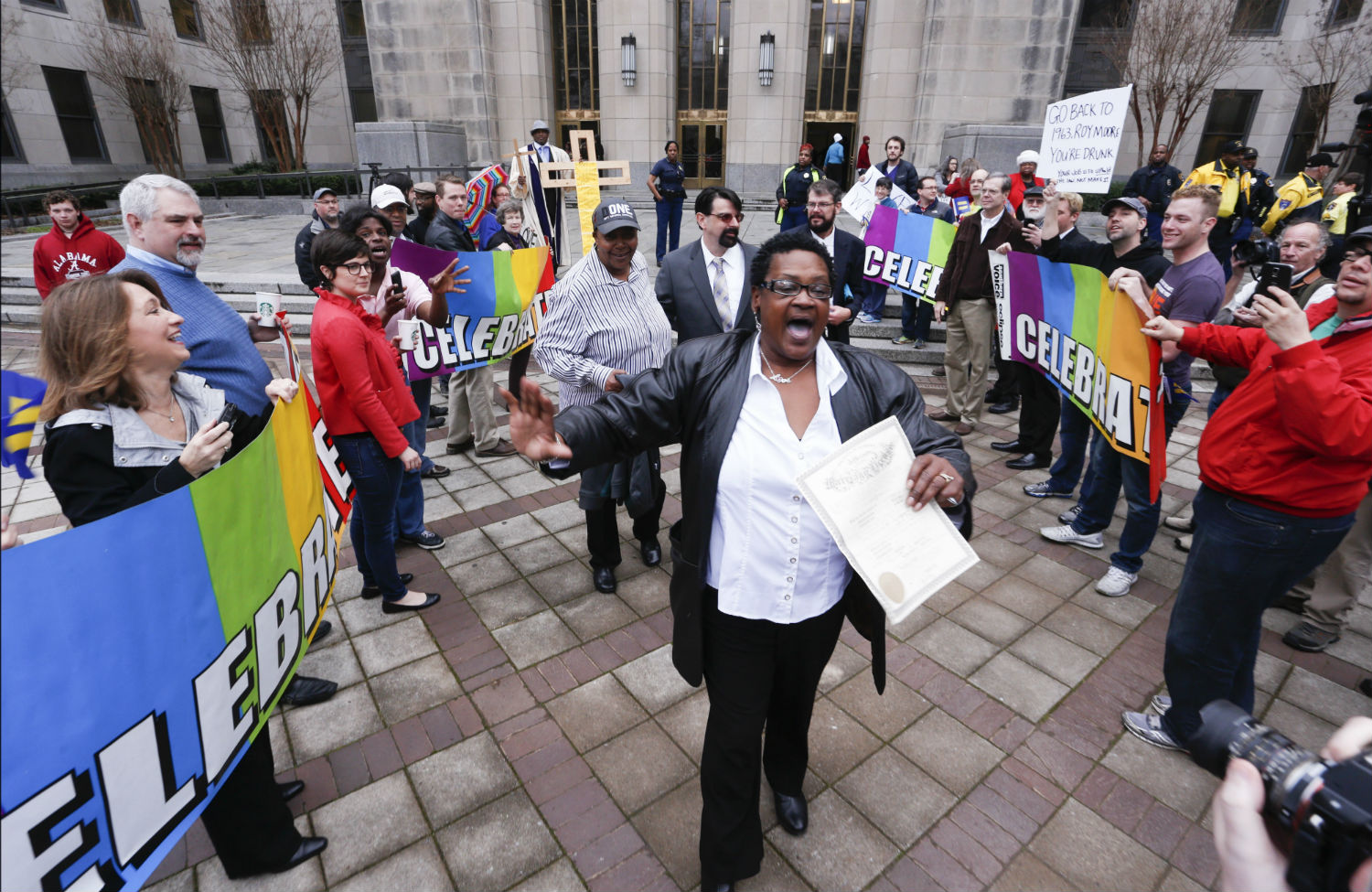 Dinah McCaryer and Olanda Smith are cheered by supporters after being married at the Jefferson County courthouse in Birmingham, Alabama. (AP/Hal Yeager)

Some white politicians in the state of Alabama evidently want to reopen the Civil War, only this time their “lost cause” is not defending slavery but prohibiting gay marriage. The chief justice of Alabama’s state Supreme Court, Roy “Ten Commandments” Moore, has ordered county judges to ignore the ruling of a US federal judge and refuse to grant marriage licenses to same-sex couples. Fifty-two of the state’s sixty-seven counties obeyed his order.

This is last-ditch resistance against social progress and sure to fail. But it is not a laughing matter. It begs a crucial question that must be asked of all those ambitious candidates who want to run for the Republican presidential nomination in 2016. Which side are you on?

I suggest political reporters of the national press corps—so eager to start covering the horse race twenty-two months before the election—should find out where these guys stand. Do people like Scott Walker of Wisconsin or Bobby Jindal of Louisiana or Lindsay Graham of South Carolina embrace the South’s hoary doctrine of states’ rights on gay marriage? Or do they accept the primacy of federal law and the US Supreme Court in this matter? If reporters don’t ask the question, the press fails its duty to the public.

We do not need another war of rebellion to settle the issue. The press can simply revive President Lincoln’s loyalty oath, the one required of Southern renegades seeking a pardon during the Civil War. Reporters should pin down the GOP wannabes, one by one. In the matter of gay marriage, do you promise to “faithfully support, protect and defend the Constitution of the United States and the union of the states thereunder?”

Tell the truth, no weasel-wording allowed. We know of course that the Republicans are pretty much in agreement in opposing gay marriage. If there are any supporters of gay marriage in their ranks, they apparently keep it to themselves.

But that’s not the question. The question is: Will they accept the law and enforce it if elected president? They should declare themselves now. Before it is too late.

The last-ditch opponents of gay rights who like Chief Justice Moore claim the Ten Commandments as higher legal authority will argue that the US Supreme Court has not yet made a final ruling on the issue. Their point is technically correct but irrelevant. Even Justice Clarence Thomas—Mr. Last Ditch himself on the Supreme Court—has bitterly conceded that his colleagues are going to decide shortly in favor of upholding the constitutional rights of gays.

In the meantime, we should all honor those fifteen probate judges in Alabama who told their state’s chief justice to suck an egg. Let the joyous weddings begin.