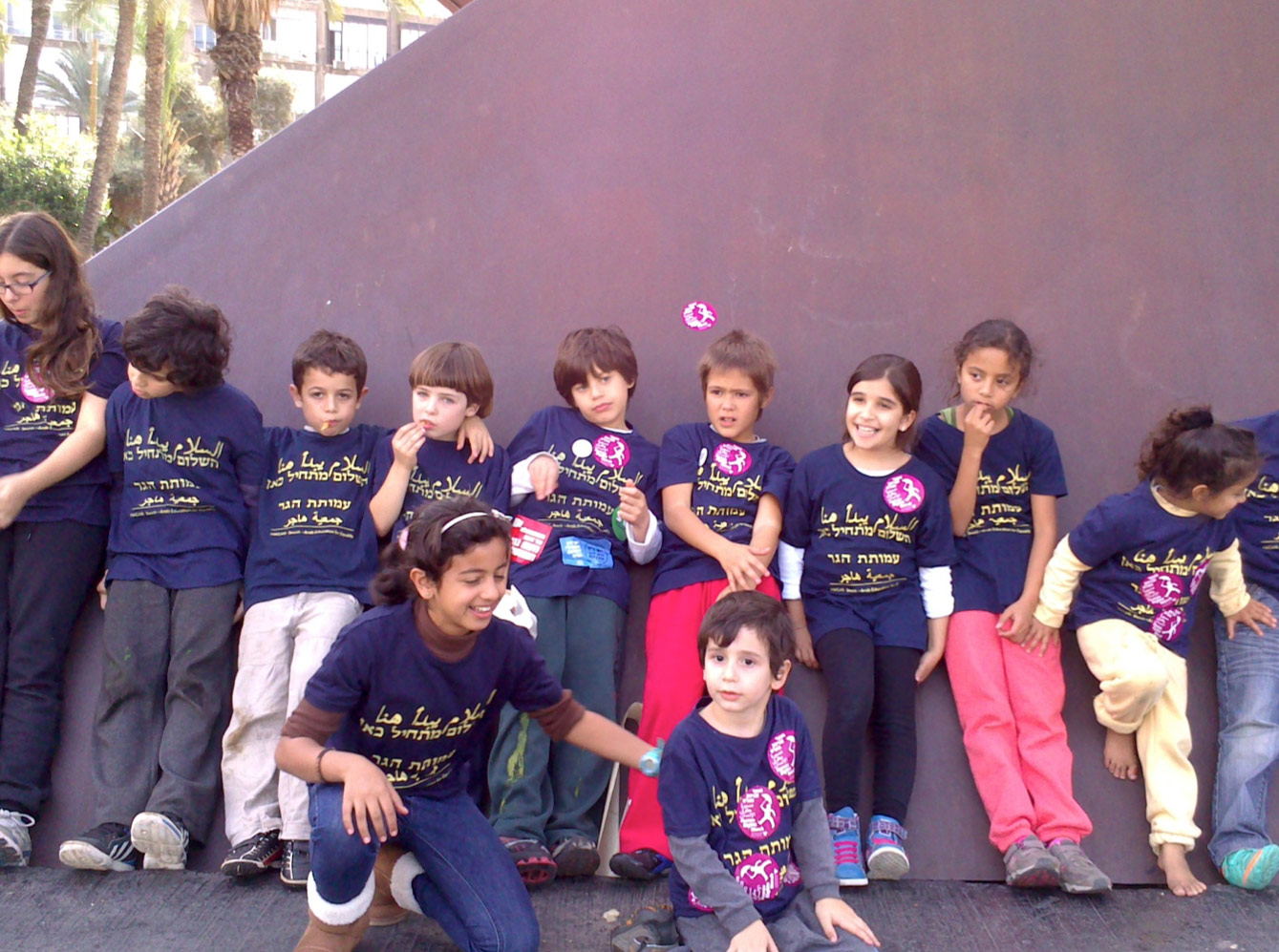 They came at night. When the principal arrived in the morning to open the school, there were scores of stickers covering the outside walls, the main entrance and the surrounding fence. The stickers, like the school’s motto, were bilingual, in Hebrew and in Arabic. In Hebrew they read “Don’t you even dare to think about a Jewess,” while in Arabic the warning was slightly different: “Don’t you dare touch a Jewess.” Under the threats there was also a phone number for people who wish to “report incidents of assimilation and provide donations.”

The school where the warning was posted is called Hagar, or Hajjar in Arabic, and is one of only five non-segregated Jewish-Arab schools in Israel. Out of a total population of 2 million K-12 schoolchildren, approximately 1,300 study in such non-segregated schools.

Moreover, Hagar is the only non-segregated daycare and school in the Negev, in the south of Israel, which is home to more than 600,000 people, a third of whom are Palestinian citizens of Israel. Hagar’s uniqueness stems from the fact that it has created a space in which Jewish and Palestinian children not only encounter one another on a daily basis (each ethnic group makes up 50 percent of the student body) but learn together in a bilingual atmosphere of mutual respect. To ensure that Hebrew and Arabic are awarded equal status, two teachers, one Jewish and the other Palestinian, are present in every classroom. The Jewish teacher speaks in Hebrew and the Palestinian teacher speaks in Arabic.

But language is only one aspect of our pedagogical endeavor. Within this bilingual space Hagar encourages direct contact with the heritage, customs and historical narrative of both ethnic groups. The teachers promote tolerance, even as they nurture the personal identity of each child and each tradition. By the age of 2, children in the daycare are already celebrating the holidays of the three monotheistic religions as well as marking the national memorial days of both cultures.

On Israeli Independence Day, for example, Hagar emphasizes the notion of independence and its relation to responsibility. We still remember how our older son, who was 3 years old at the time, returned home after Independence Day proudly notifying us that he could put on clothes by himself. He was, he said, independent.

On Nakba Day and Holocaust Day, the kindergarten emphasizes the idea of loss and suffering and accentuates the importance of empathy, and that every one of us has experienced some kind of injury and grief. And from the religious holidays we try to glean their universal message, such as the liberation from slavery commemorated during Passover. The idea is that by the time the children are old enough to learn that there are two conflicting national narratives, both of which are taught in the upper grades, they already have the necessary emotional and intellectual tools to deal with conflict through dialogue.

Although in the United States this kind of multicultural educational project is often embraced and even celebrated, in Israel it is usually actively discouraged. Considering that the anti-miscegenation discourse in Israel today is reminiscent of the discourse of the Jim Crow South, it is not really surprising that an educational project that encourages tolerance and empathy has become the site of such hate crimes. In an echo of white opposition to integration of schools in the American South in the 1950s and ’60s, most Jews in Israel consider our educational project to be extremely threatening because it defies the ethnic division underpinning the Zionist project.

Indeed, the anti-miscegenation stickers are simply another manifestation of the state’s incessant attempt to police the borders of the dominant ethnic group so as to guarantee its purity. Currently the oldest children in our school are only 11, but their intermingling is considered a threat by many Israelis. And this needs to be taken seriously—in May, four Jews were indicted for brutally beating Palestinians who they thought were interested in dating Jewish women.

In a totally different context, the Jewish reform movement in the United States has been grappling with similar issues. Looking at the levels of Jewish assimilation, the leader of the Union for Reform Judaism, Rabbi Rick Jacobs, has reacted in a bold way. He called for an “audacious hospitality” to welcome intermarried couples and others into the Jewish community. “I still hear Jewish leaders talk about intermarriage as if it were a disease,” Jacobs said, adding, “It is not.” Jacobs asks Jews in the United States to look forward to the future and to counter prevalent atavistic proclivities by addressing the question of how to engage with difference head-on.

In Israel, the stakes are considered to be even higher, and therefore the opposition is more dangerous. A bond between a Jew and a Palestinian (who is framed as the enemy) is conceived as a threat not only to the community but also to the state itself. For us, as parents and as part of the group that founded Hagar seven years ago, this latest evidence of hatred has served as an alarming reminder of how this wonderful educational project continues to stand on precarious ground.

When we talked to our son, now 9, about what happened, he responded by turning the table and telling us not to worry. “The community,” he said, “will just come out stronger by having to deal with this.” Although we are less sure than he is about the prospects for the future, we have decided to try to adopt his optimism because he, too, is part of that unknowable future.