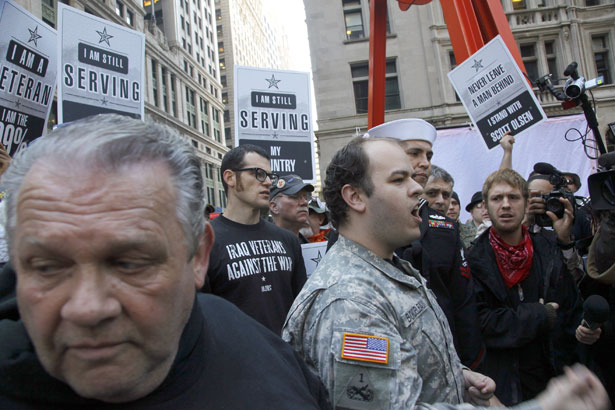 Though Republicans might not understand, it takes a lot more than bumper stickers to support the troops who fight their wars. It should be a no-brainer, but it seems like those who have determined to politicize the situation at the VA have forgotten the primary reason so many veterans are in such dire need of care to begin with, and why the scandalously cash-strapped department has been so hard pressed to provide it. As I said on Face the Nation this week, without considering the historical context of the wars in Iraq and Afghanistan—namely, that they were both unnecessary and prosecuted with a stunning degree of ineptitude—and without considering Congress’s history of underfunding veterans healthcare, it’s irresponsible to dive-bomb the White House with finger-pointing and grandstanding speeches about who needs to resign, and when.

There’s plenty of blame to go around concerning the massive failures of the healthcare system in the Veterans Administration. Both the media and politicians are focusing on administrative failures at the top and are calling for the resignation of Eric Shinseki, the retired four-star general who heads the federal agency, as if such a high-profile decapitation will fix the problem.

But members of both parties agree: It will not. Senator Claire McCaskill (D-MO) told Politico, “It shouldn’t be about a political scalp. It should be: How are we going to improve care for veterans?” And Senator James Inhofe (R-OK) belittled his colleagues’ knee-jerk demand for a cabinet-level resignation: “I’ve never seen [the tactic] work yet…. I’ve only been around twenty years.” Even Bob Dole has dismissed the notion that Shinseki should be forced out. Former Senator Max Cleland (D-GA), a Vietnam veteran and triple amputee, wrote in a Politico op-ed, “As a disabled veteran myself, there is no one I would rather have heading up the VA now, in this turbulent time, than Eric Shinseki. In my experience, he is the best there is.” Cleland should know; in addition to being, like Dole, a genuine war hero, he also served under President Carter as administrator of veterans affairs (the predecessor position to Shinseki’s) from 1977 to 1981.

Obviously, the creation of secret waiting lists at VA facilities is horrible. There is no excuse for such dereliction of duty, especially when it again puts the lives of our brave veterans in danger after they’ve already been made to face enough. Simply put, those who are responsible for making these lists should be fired. And if their actions are determined to have been illegal, then they should be prosecuted for criminal activity.

But just as obviously, we need to recognize that those actions were not ordered by Shinseki, himself a veteran twice awarded the purple heart (and, as you might recall, the Army Chief of Staff who—presciently—dared contest the Rumsfeld-Wolfowitz notion that postwar Iraq could be reconstructed with a mere 100,000 troops). Moreover, under Shinseki’s watch, the VA has cut the backlog of veterans-benefits claims by more than half. Veteran homelessness has dropped by twenty-four percent since Shinseki made it a priority in 2010.

The creation of “secret lists” comprised unauthorized decisions made at the local level, purposefully hidden from the top leadership of the agency. While we need to focus on the guilty parties who made the actual decisions to create these lists, we also need to recognize that none of this exists in a vacuum. This problem was not created in 2014, and we would be oversimplifying things if we didn’t also recognize that there are many, many others—over many, many years—who have also contributed greatly to this terrible situation.

Why is the VA suffering from a lack of resources? You can find the answer on Capitol Hill. Insufficient funding of veterans’ healthcare has been caused primarily by political decisions made by “support-our-troops” members of the US Senate and House of Representatives. Members of Congress who have in recent years voted against increasing the funding of veterans’ healthcare—increases necessary to meet the need created by the wars in Iraq and Afghanistan—deserve much of the blame for starving the VA into this scandalous situation.

Many of those members of Congress who are now calling for the resignation of Shinseki are themselves guilty of voting against adequate funding for veterans’ healthcare, and they are therefore partly responsible for the deaths of veterans who didn’t get necessary medical treatment quickly enough to save their lives. It is just as reasonable to call for their resignations as it is to call for Shinseki’s resignation, if not more so. If you’re truly outraged, then tell your member of Congress to cough up the necessary funds for the VA. The secretary of veterans affairs can only ask for increased funding; it’s up to Congress to actually provide it.

The inept execution of the Bush administration’s two wars also plays a significant role. It cannot be said enough that our soldiers were nickel-and-dimed by Donald Rumsfeld’s DoD. They should have been provided with body armor (The Army prioritized body armor on the same level as socks, according to a 2005 New York Times report) and with adequately-protected military vehicles from the get-go (“We were reduced to duct taping old flak jackets to the side of our Humvees to provide protection,” Paul Rieckhoff, founder and executive director of IAVA, told NewsHour in 2004). Why are these decade-old outrages relevant today? Well, addressing these failures promptly and effectively then would surely have reduced the demand side of the veterans’ healthcare economic equation now.

To peel back another layer, an even more important factor in the creation of today’s mess was the disgraceful and dishonest launching of the Iraq War. All of those Bush administration officials, as well as their neocon allies, who lied and shamefully tricked us—and our troops—into fighting that needless war are responsible for the injuries sustained as a result of it. It’s a fairly simple case of cause-and-effect, and as long as Iraq War veterans suffer, blood continues to be spilt on their dishonest hands.

It cannot be repeated often enough that, none of these politicians who involved us in the reckless and unjustified wars of the 2000s has ever been held adequately responsible for the massive damage they have done to our finances, international standing, military readiness, and health of our veterans. It might be convenient to pin all of the hawks’ failings (and they are legion) on Eric Shinseki’s shoulders, as Washington Post columnist Eugene Robinson suggests, but it would be morally, historically and economically bankrupt to do so. It would suggest that we, as a nation, do not actually value the lives and health of our soldiers over the political and financial imperatives of our ruling class. It would suggest that we consider our troops to be nothing more than rent-a-cops, called in to do security for the big event, then forgotten the next morning.

Today’s lesson is quite simple: after conflicts are over, we need to fully fund the healthcare and medical needs of our veterans. Forever. Even if that means making the political and economic elite pay more in taxes. Even if that means taking politics out of the VA and focusing instead on the welfare of our veterans. That we have politicians and members of the media who need to be reminded of this is a disgrace.