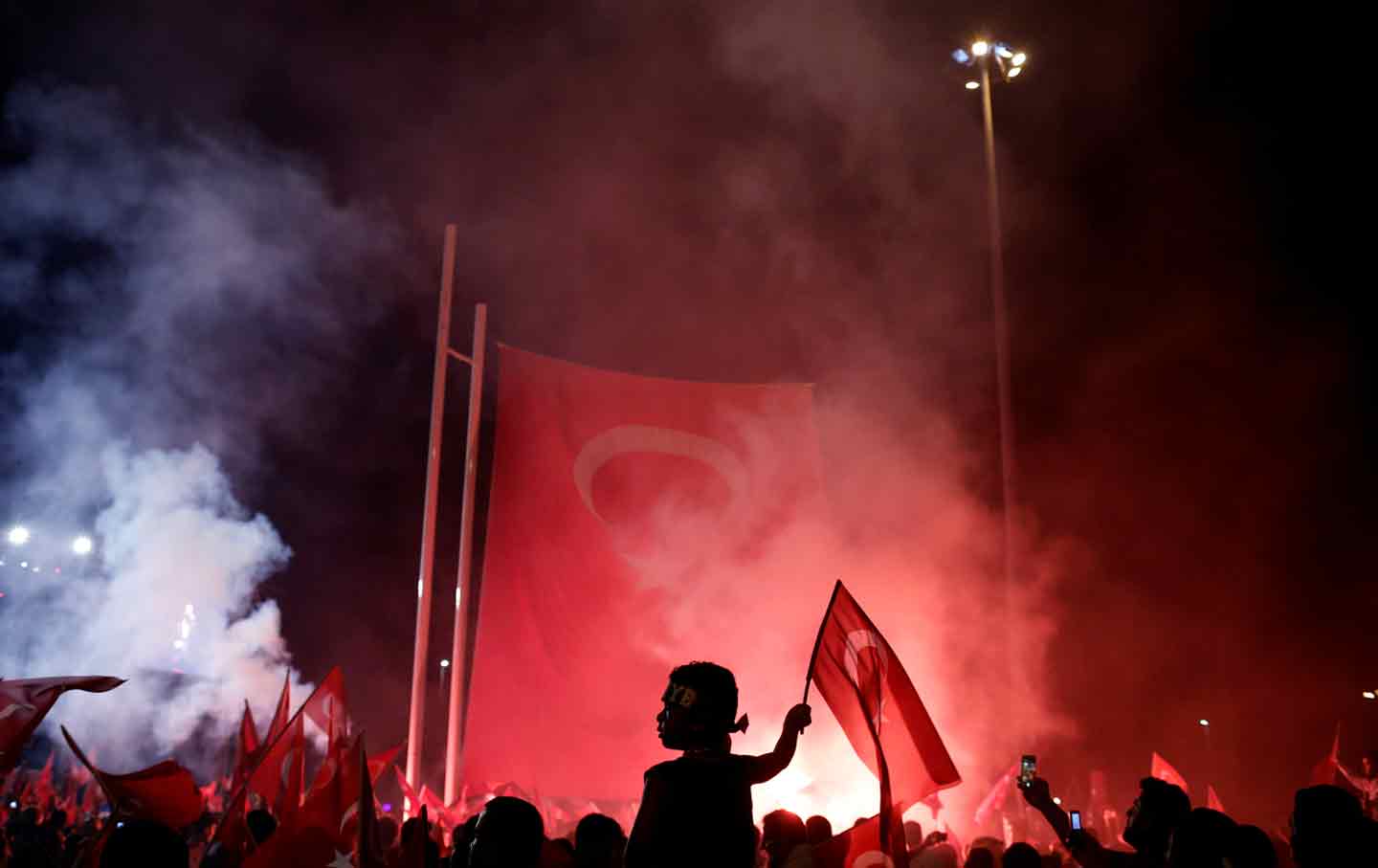 July 15 was a day of firsts in Turkey’s political history. To be clear, waking up to the noise of an army tank is not an exceptional morning for Turkish citizens my age. Throughout my life, I have already witnessed four military interventions: in 1971, a “coup by memorandum”; in 1980, a “military coup d’état”; in 1997, a “military memorandum”; and in 2007, a “military e-memorandum.” Turkey’s military has long seen itself as the “guardian of democracy and secularism” and considered it a basic duty to rescue the nation from falling off the edge of a cliff into instability and chaos. So, last Friday, when I heard on TRT, the state-run TV channel, that martial law was being declared along with a curfew, I was not quite shocked. But I was surprised. Surprised, because each coup up until this point had been carried out within a political process that legitimized it, or at least created popular support for the aim of the intervention. What happened last week was unprecedented, even in Turkey’s coup-filled history.

This coup wasn’t directly related to ongoing problems facing Turkey. The Justice and Development Party (AKP) has been in power for 14 years, in all of which Recep Tayyip Erdoğan has been its leader, and, throughout his tenure, the opinions of AKP detractors have remained relatively static. So what was it that triggered this military coup? I could not believe that it was a real attempt to consolidate power on behalf of the military until I heard a statement issued by the so-called “Peace at Home Council.” In the statement, the military council emphasized the AKP’s violations of the constitution and claimed that it would restore order, democracy, and freedom to the country. But the timing was strange; the AKP’s violations of the constitution have been fundamental criticisms since the beginning of Erdoğan’s presidency and were a hot topic more than a year ago, but they were not pressing concerns at this precise moment.

The only notable portion of the statement was a promise to abide by international commitments and agreements, which suggested international recognition to be a primary concern of the coup plotters. With such scant rationale, even Erdoğan’s detractors couldn’t find a compelling reason to support the military coup. During their 14 years in power there were times in which a junta may have found support from the anti-AKP groups, but this time there was nothing that could legitimize it.

So the timing of the coup attempt was ill-considered, and the coup itself was poorly planned.

The timing of the coup attempt was ill-considered, and the coup itself was poorly planned.

But with its dissolution, new details have come to the fore to make the situation a little clearer. In fact, there was a rationale on the part of the plotters. Just before the coup, the Turkish government had been preparing to issue arrest warrants for soldiers accused of supporting the Gülenist movement, and these soldiers were in a rush to act on the government and the president’s men before being arrested. If the agitators hadn’t pulled the trigger that night, they would have been detained the following morning and dismissed from the army at the upcoming Supreme Military Council in August. It was personal and individual interests like these—rather than political ideals or claims—that spurred the coup, and for this reason the soldiers were unable to garner popular support from either society or from the army in any institutional sense.

During the attempt the army was divided into two. The putschists tried to convince, and then force, Turkey’s chief of staff, Hulusi Akar, to join the junta, but failed. As the top commander resisted, a bitter fight broke out at headquarters between pro-coup and anti-coup parties, ultimately resulting in several deaths. Akar was held hostage at the chief-of-staff headquarters with other commanders, until anti-coup officers rescued them on July 16. For the first time in history, lower ranking officers and soldiers used force on their commanders, torturing and killing the ones who resisted. However, besides the Gülenists, anti-Erdoğan nationalists, and the odd career-minded officer, the majority of the army was against the junta. Other generals didn’t support the coup and fought until the hostages were all rescued. These clashes were brutal. When all the Turkish Air Force’s remaining F16s departed to protect the air space from the F16s under the junta’s control, the malevolent nature of this attempted coup became clear. The Turkish army had started a war with itself.

The Turkish army had started a war with itself.

It was shocking to see Turkish F16s and Sikorsky planes bombing their own country, their people and their parliament—a symbol of the nation’s will and the power of democracy. While junta jets were bombing the parliament building, deputies from all parties were present to show support and stand against the military coup. Citizens watched the nightmare live on television as tanks, helicopters and jets fired on and bombed the people, the parliament buildings and police headquarters. These were not enemy pilots or jets but rather our own soldiers, supposedly tasked with the job of protecting their country against this very kind of hostile attack. This Hollywoodesque war scene was a first in Turkey’s history and incited a huge reaction in civil society.

From the beginning, the government called this attempt not a coup of the Turkish army but an attempt of a group of “traitors” within the army, leading people to perceive it as an insurrection not only against the AKP but against the army hierarchy as well. This is one explanation behind the brutality against soldiers in support of the coup, like the junta forces located on the Bosporus Bridge in Istanbul who were lynched by a mass of civilians. Some young soldiers who were only carrying out orders from their junta leaders were badly beaten in this incident.

In extremely emotional conditions, millions took to the streets to protest the attempted military coup, often standing on the tanks and resisting the military, just because of a FaceTime call by Erdoğan that aired on CNNTurk. Erdoğan called for everybody, not only his supporters, “to go to the streets and give them their answer,” and soon after civilians engulfed Turkey’s squares and airports. Media groups continued anti-junta broadcasts (except TRT which had been seized by the junta armed forces), and the pro-democracy rhetoric held sway across all channels. Even non-AKP TV channels, which have in the past been threatened by the government or its supporters, stood against the military forces attempting the coup.

That night, President Erdoğan, who has long been known for being an outspoken critic of social media, especially Twitter, ironically used his Twitter account to call for resistance. He tweeted to his 8.6 million followers and posted a message on his Facebook page. When Internet access started to go in and out, Erdoğan sent a signed nationwide text message, calling people to stand for democracy and against the junta. For the first time in Turkey’s social-media history, the supporters and critics of different political parties stood together. Thanks to new media, the message was clear; the people were standing in solidarity against the misuse of gun power and in support of free media as a main pillar of democracy.

What will happen in the days ahead is unclear. Thousands of people from the army, the police and the judiciary have been arrested, and many fear that Erdoğan may abuse this situation, using it as an excuse to embark on a witch-hunt of anti-AKP groups and factions. Nearly 3,000 judges and prosecutors, including two constitutional court members, have been suspended or detained in the wake of the failed coup, which may lead to a judicial crackdown and erode the already poisoned checks and balances system of the government system. Many people who stood against the junta—including members of the media and academia—were subsequently saddened by the threat of losing basic freedoms under the pretense of restoring security.

The rumor that the attempt was a fake junta in order to make such antidemocratic changes easily has begun to gain traction. This nonsense is nothing more than a conspiracy theory; what happened went too far to be a false flag operation. Almost 300 people lost their lives, thousands were injured, and the thousands more who have been detained or arrested may face execution in the future. The risks taken by all parties were unacceptable. Those involved in the coup acted like suicide bombers; Erdoğan survived the junta, and probably escaped death by mere minutes. The coup was real, and what comes next will be real too.

In the aftermath of this failed coup, Turkish society and democracy face several risks and threats, including that of domestic war. But perhaps by improving solidarity between different political parties, the unrest also created an opportunity for Turkey—a country that has been chipping away at many of its fundamental values for a long time—to become a more normal society. It also provides a great opportunity for Erdoğan to act as a real president and unite the country—whether in a parliamentary or presidential system—instead of remaining as the leader of the AKP within a divided society, while carrying the title of president.