Dixon is referring to Texas’s passage of Senate Bill 11—commonly known as campus carry—which permits concealed handgun license holders to carry guns in all public universities in the state. The legislation went into effect on August 1. It coincided with the 50th anniversary of the University of Texas tower massacre, an event widely regarded as the first mass shooting in the country, where a sniper perched atop the campus’s main building shot 43 people, 13 of whom were killed. To fight the bill, students, faculty, staff, and parents gathered on the UT Austin campus on Wednesday to participate in an event called “Cocks Not Glocks.” 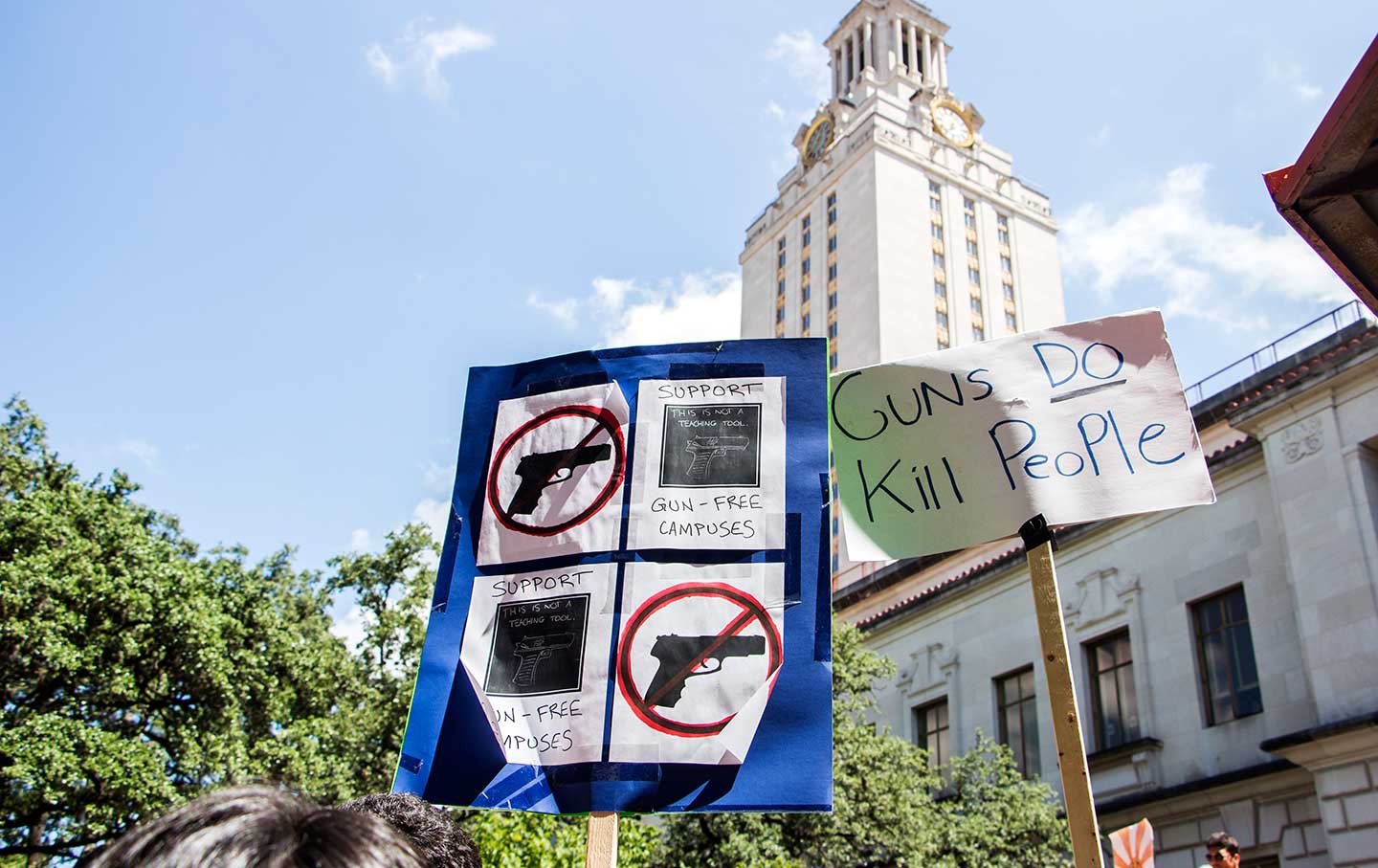 The protesters—dildos in hand, on backpacks, strapped to waists, suction-cupped to foreheads—gathered to listen to local progressive leaders, like Austin City Council member Kathie Tovo and Democratic candidate for state representative Gina Hinojosa, as well as members from Moms Demand Action for Gun Sense in America and Cocks Not Glocks leaders Jessica Jin and Ana López.

Jin, a UT alum working for a tech startup in San Francisco, had her work cut out for her as soon as her plane touched down in Austin this week. She teamed up with allies to promote the event, making videos with dramatic Shakespearean monologues and jazz bands whose sets were decked out in dildos swinging from the ceiling. Days before classes started, she got word that the The Daily Show would be sending a correspondent to cover the event. She had more than 4,000 sex toys sitting in boxes crowding the apartments of her co-organizers, waiting to be distributed before Wednesday.

The popularity of the event can be credited, in part, to how long it was planned in advance. Cocks Not Glocks has been in the works since October, after Jin learned that her home state would become the eighth in the country to allow students to carry guns on campuses.

As a Texan hailing from San Antonio, Jin got the gun thing. She understood that it was fun to go out shooting on a friend’s ranch, and she saw the value in getting a concealed-handgun license, having considered getting one herself. But with guns now making their way into classrooms, she thought enough was enough.

The idea came shortly after the Umpqua Community College shooting in Oregon, where a gunman killed nine and injured nine others before turning the gun on himself. Jin sat in Austin traffic and listened to an uninspiring discussion on gun violence in this country. 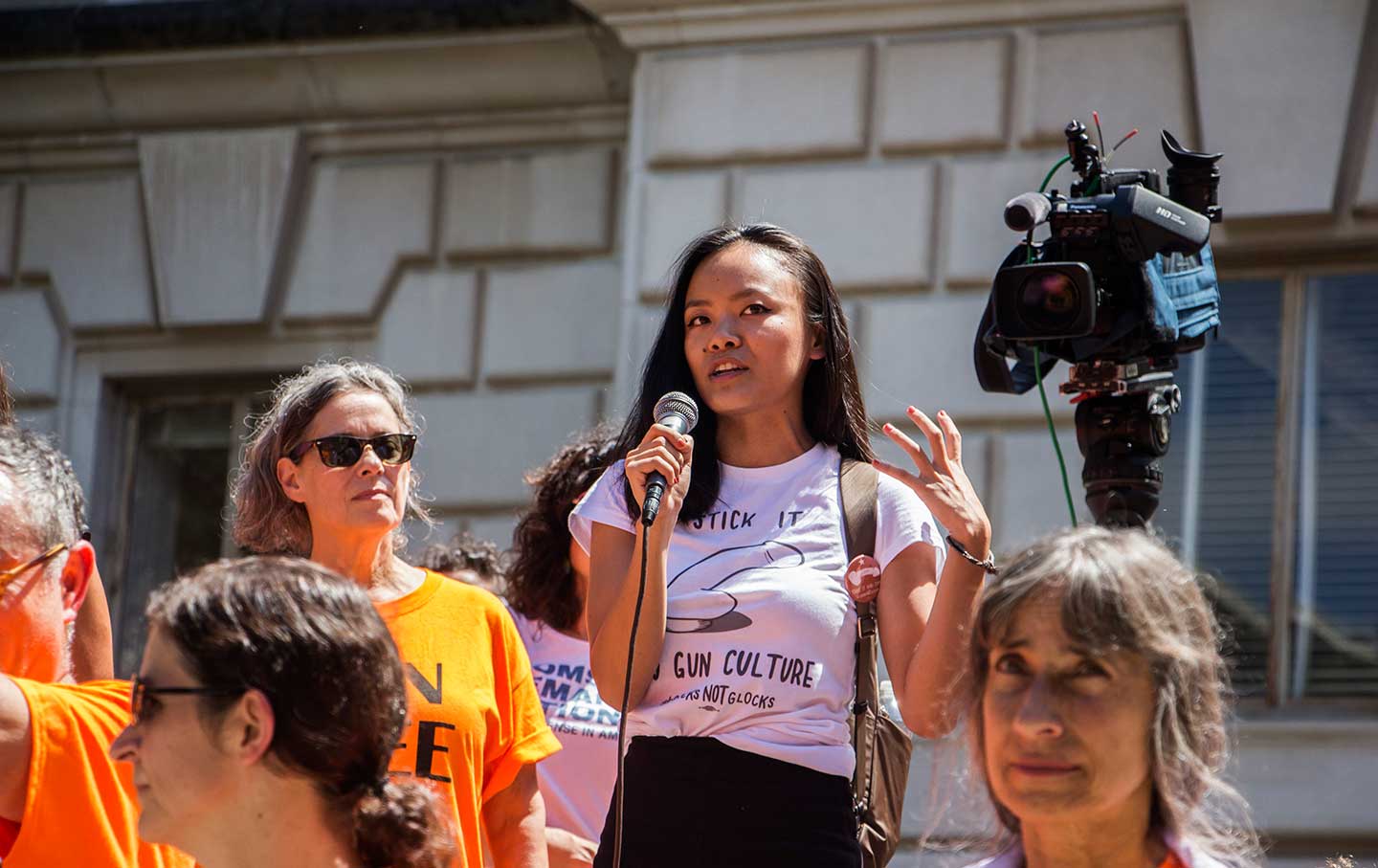 She took to Facebook to create an event she titled “Cocks Not Glocks”—calling on the UT Austin community to strap sex toys to their backpacks on the first day of classes.

Jin, proud of what she thought would be a small joke, shut her laptop, went to bed, and woke up to find that her event had gone viral. She went from being indifferent to gun issues, to being thrown into the arena of gun activism overnight.

In the following months, Jin’s Facebook event garnered 10,000 members. She flipped her once-neutral stance on gun issues, and began attending gun safety–advocacy gatherings, meeting professors, students, and people personally affected by gun violence. She actively confronted her trolls, who argued that guns would protect her from being assaulted or raped. One Second Amendment enthusiast went so far as to publish her address online, instructing people to “let her know how they felt” about her protest.

Gun rights zealots threatened the demonstration, but to no avail. Rather than using aggression, one member of the national pro-gun group Students for Concealed Carry carried a sign reading “Coexist,” intended to communicate solidarity with the right to free speech and to also highlight its ability to exist with concealed carry.

“It’s an issue of personal liberty,” said Brian Bensimon, a UT student and the organization’s Texas director. “It’s a matter of rights and when you consider that concealed carry is allowed in museums, grocery stores, and even at our own state capitol, that there’s not really a reason to ban it from colleges.” 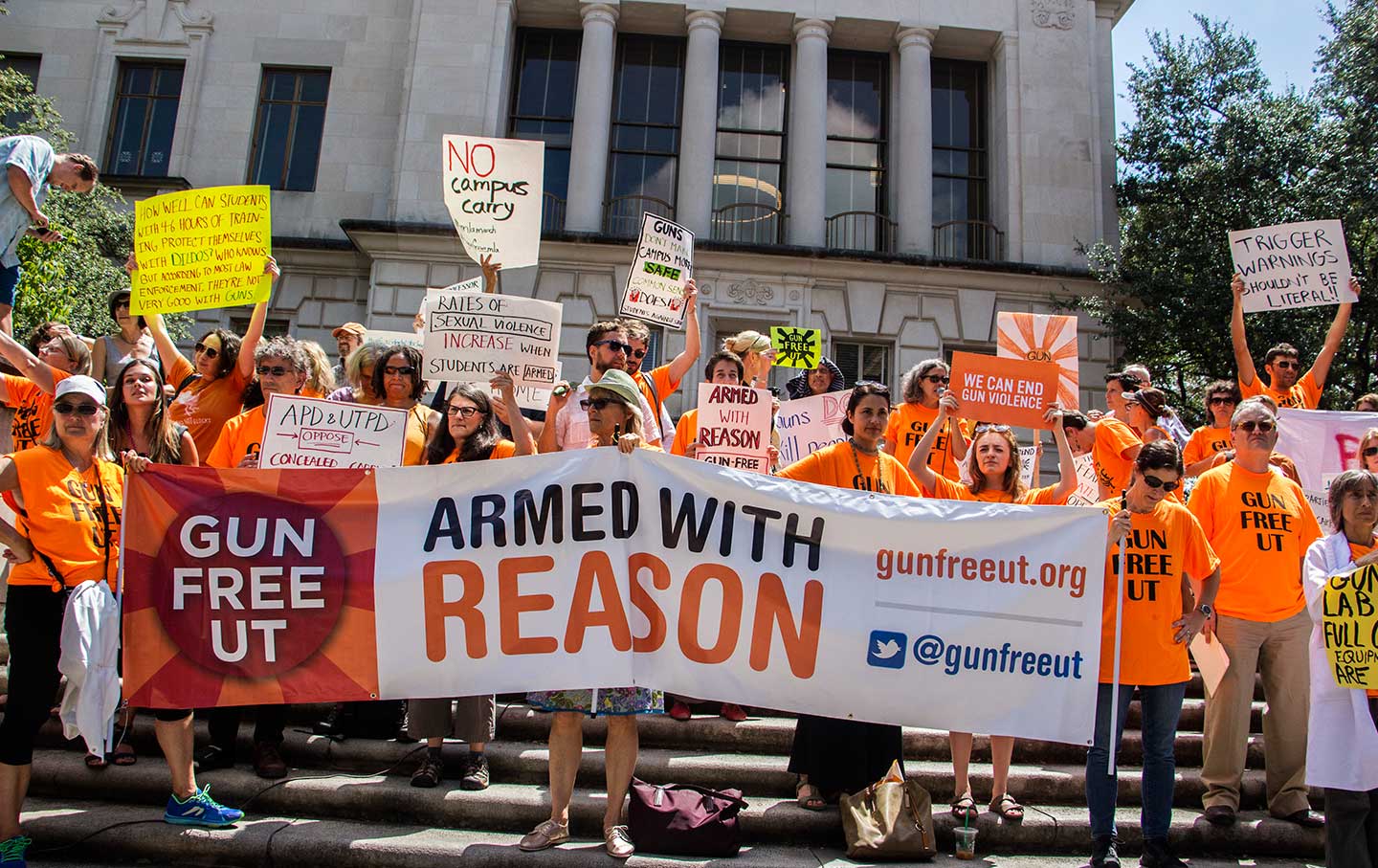 Other Texan students echoed this sentiment. C.J. Grisham, a Texas A&M student and army veteran who carries his gun on campus, specifically challenged a growing concern held especially by faculty.

“This idea that it’s going to stifle debate is asinine and absurd,” Grisham said. “It’s just a narrative by anti-gun, liberal professors to undermine our rights.”

Professors are among the most vocal about their opposition to the law, their most common worry being that the presence of guns in classrooms will chill academic discourse. Over the past few months, thousands of professors have signed petitions and begun discussions on Facebook about the new policy, debating how to word their syllabi and the extent of their obligation to observe the law. Three UT Austin professors went so far as to file a lawsuit against the university and the state. Their request for a preliminary injunction, which would have blocked implementation of the law before the first day of class, was denied on August 21, but the case will continue on to trial.

“This is a fight that needs to happen in Texas,” said Mia Carter, UT Austin literature professor and a plaintiff in the lawsuit.

In a similar spirit, Jin is instructing students to keep the movement going until the law is repealed.

Biden’s Potential Next Climate Adviser Has Ties to Big Oil

To the Hypocrite Go the Spoils

The Sea According to Rachel Carson