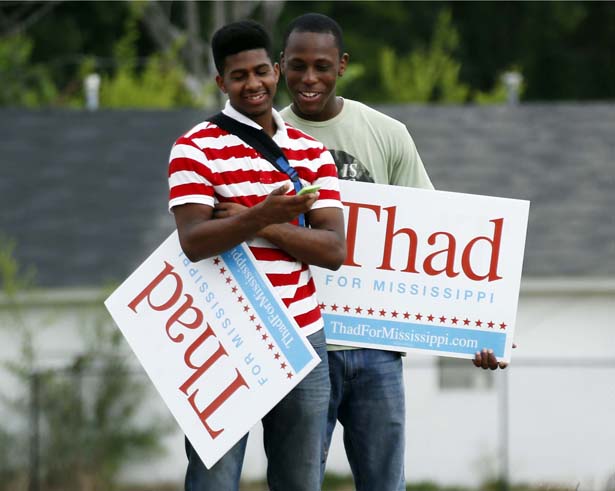 There was a Republican primary vote in Mississippi this week, and it appears that establishment conservative Thad Cochran survived a tough runoff against his Tea Party opponent by reaching out to African-American voters.

It’s an ironic outcome, given the GOP’s near-total dependence on white Southerners for its base vote. But maybe the vote will inspire Senator Cochran to honor the history of the voting rights struggle by joining with Representative Keith Ellison and Representative Mark Pocan to sponsor their constitutional amendment to explicitly give Americans the right to vote.

Because there’s a deeper history of voting rights in Mississippi that we should not forget—and Cochran should know it, because he was in law school at Ole Miss when the killers struck. Fifty years ago this week, three young civil rights workers near Philadelphia, Mississippi, disappeared into the history books, murdered for daring to try to register African-Americans to vote.

I drove their road once, just five years ago—in the daytime. I tried to imagine the fear in their car that June night. I cannot imagine the courage it took for the three of them to voluntarily choose that Mississippi “freedom road” back in 1964.

The killings of James Earl Chaney, Michael Schwerner and Andrew Goodman galvanized the civil rights movement that summer, and helped cement the final passage of the Civil Rights Act of 1964 on July 2, 1964. Freedom Summer also focused the nation’s attention on the lack of African-American voting rights in Mississippi and across the South. Along with the Selma march, Freedom Summer helped ignite support for the Voting Rights Act of 1965, signed into law almost exactly a year after the bodies of the three murdered Freedom Summer organizers were found.

A half century ago, Freedom Summer also inspired the Mississippi Freedom Democratic Party (MFDP) to form an integrated slate to challenge the seating of the all-white state delegation at the Democratic National Convention in Atlantic City in late August of 1964, on the grounds that African-Americans were not allowed to participate in the primary. Despite widespread support among convention delegates, the MFDP delegation was not seated, because of President Lyndon Johnson’s fear that much of the Deep South would flip from Democratic to Republican in that fall’s election against Barry Goldwater (five states in the former Confederacy did exactly that, even with LBJ’s maneuverings!).

Instead, Johnson delegated Hubert Humphrey to try to work out a compromise, which amounted to an offer to the MFDP to seat two of its delegates. The civil rights workers rejected the offer. In the words of Fannie Lou Hamer: “We didn’t come all this way for no two seats when all of us is tired.”

The Mississippi Freedom Democratic Party viewed the attempted compromise, and the failure to seat the full, integrated delegation, as a setback for justice. As Congressman John Lewis, then a leader of SNCC, wrote: “We had played by the rules, done everything we were supposed to do, had played the game exactly as required, had arrived at the doorstep and found the door slammed in our face.”

But it was not a total defeat, because the MFDP had forced a victory that turned out to be substantial—forcing the national Democratic Party to start walking down the road of fairer delegate selection processes and integrated delegations. The rules were about to change. The party had chosen its future, though it didn’t know it yet—a rainbow future.

On one side, African-Americans, the civil rights movement wielding the Voting Rights Act of 1965, and a national Democratic Party which soon came to depend on African-American voters as its base. On the other side, racism, the new Republican Party in the old South, and Richard Nixon’s successful “Southern Strategy,” which led to a competitive—then dominant—Southern GOP across the former Confederate states.

By 1980, the balance-of-power in the South had swung far enough that one of the first things Ronald Reagan did after winning the Republican presidential nomination in 1980 was to head to the Neshoba County Fair in Philadelphia, Mississippi, to declare his support for “states’ rights.” You could not spit in the eye of the civil rights movement more clearly than Ronald Reagan did that day—yet he always pretended to wonder why so few African-Americans ever trusted him—or the party that still idolizes him.

Mississippi voted for Reagan in 1980 (after choosing Jimmy Carter in 1976). The Republicans won the short-term political gamble, opting for the wrong side of history on civil rights in order to align themselves with Southern white racists. That gamble by Nixon and Reagan paid off with an increasingly solid South for the GOP, as white Southern voters became the bulwark of the national party.

Yet the seeds of the future had been planted, too, and thirty years ago they began to flower. Only twenty years after Freedom Summer, Jesse Jackson ran for president in the Democratic primaries, winning Virginia, South Carolina, and Louisiana, plus Washington, DC—and in March of 1984, only one generation after the Mississippi Freedom Democratic Party had been denied their seats in Atlantic City, Jesse Jackson put more supporters into the Mississippi caucuses than any other candidate!

The symbolism was perfect—by carrying Mississippi, the state where only about one in every twenty African-Americans had even been registered to vote when Freedom Summer was launched twenty years before, Jackson’s campaign demonstrated that the base of the Democratic Party vote for the future would start with African-Americans.

Jackson’s 1984 and 1988 presidential campaigns also changed the national Democratic Party rules, making them more proportional and more fair—changes that followed directly from the rules challenges that the MFDP launched in 1964, changes that eventually paved the way for the first African-American to win the presidency, by allowing Barack Obama to defeat Hillary Clinton in the 2008 primaries.

Pete Seeger used to sing to us about Chaney, Schwerner, Goodman: “those three are on my mind.” So as we analyze Senator Cochran’s surprising victory, can we keep the real history of Freedom Summer on our minds? Can we spare a moment to remember Ella Baker, Robert Moses, Fannie Lou Hamer—and all those who made the Mississippi Freedom Democratic Party possible? Can we spare a brain cell to remember the un-named African-Americans who brought their voter registration work into fruition by surprising the Democratic Party regulars in the Mississippi caucuses back in 1984? Can we keep Jesse Jackson’s 1984 and 1988 presidential campaigners on our minds today, with their emphasis on continuing the work of Freedom Summer, by registering the young, registering African-Americans, registering Latinos?

They sowed the seeds of the future. Compared to the obstacles and dangers they faced, Senator Cochran’s victory is just a spinoff. Lest we forget.