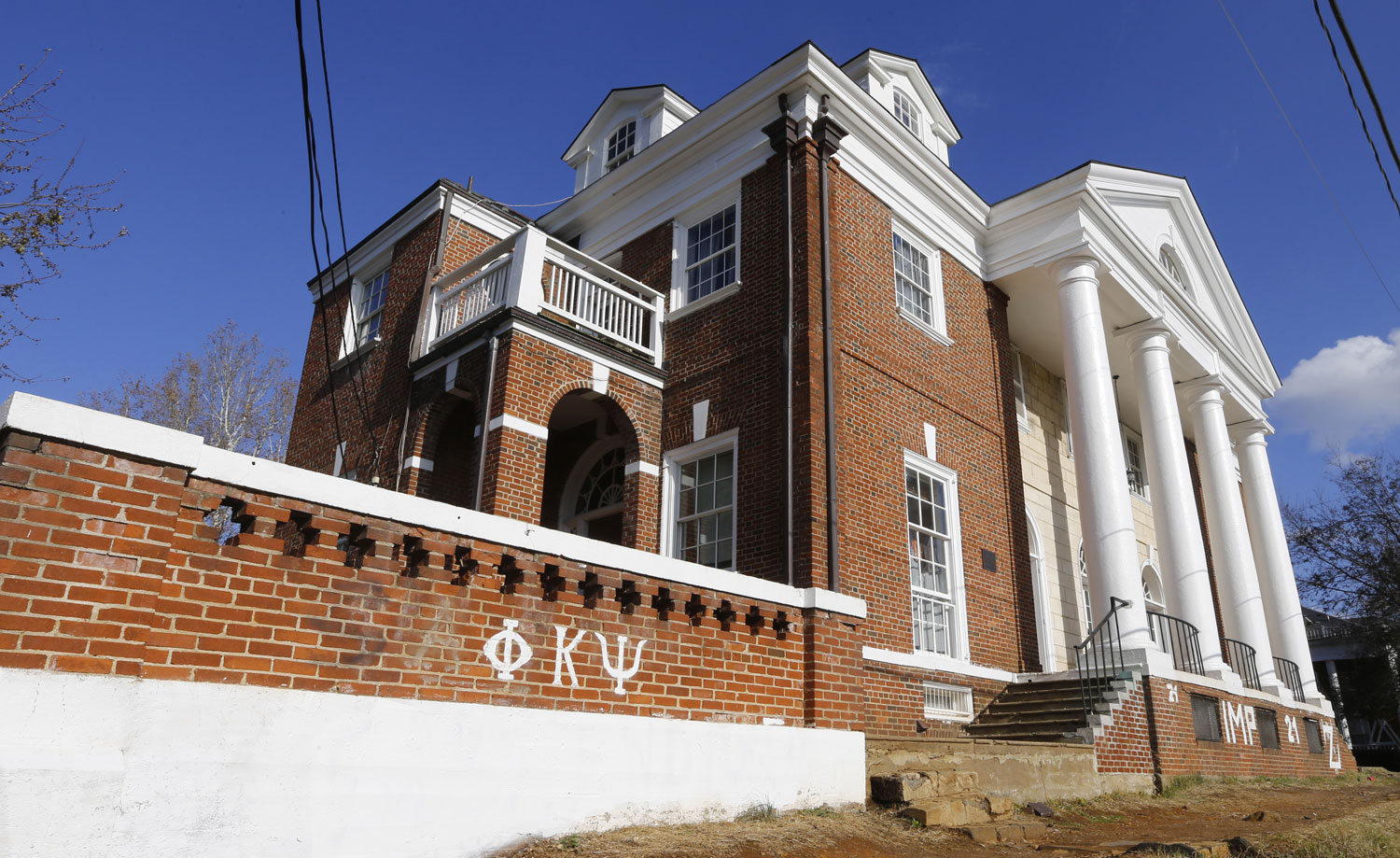 The Phi Kappa Psi fraternity house at the University of Virginia, where an alleged gang rape was reported to have occurred in Rolling Stone magazine (AP Photo/Steve Helber)

Rolling Stone’s recent cover story about rape at the University of Virginia has a far more legitimate claim to having “broken the Internet” than Kim Kardashian’s racy photos. In the two weeks since the piece appeared online, in has gone viral on social media and ignited a wide-ranging discussion about rape on college campuses. Its vivid depiction of the alleged gang rape of a college freshman, whom the piece refers to as “Jackie,” by seven fraternity members fueled such outrage among current students and alums that the university has suspended all fraternities for the rest of the year.

The Rolling Stone story was groundbreaking in that—unlike most media treatments of rape, which presume the perpetrator’s innocence and reserve all skepticism for the victim—it privileged the victim’s point of view. The detailed narrative of the attack proceeds without the interruption of typical journalistic qualifiers (“she alleged that,” “according to Jackie”). This provided a rare opportunity for the reader to experience the attack’s brutality as Jackie remembered it. The magazine’s editors defended this stylistic choice, saying it was clear the account represented Jackie’s recollection rather than the journalist’s findings of fact.

But since its publication, the story has begun to unravel. The article’s author, Sabrina Rubin Erdely, initially came under fire for failing to interview any of the young men accused of rape, whose names are not used in the article but whose identities might be deciphered from various details, including the name of the fraternity to which they belonged, which was identified. Erdely has said she chose not to contact the alleged attackers at the request of the victim, who feared retaliation—including further violence—from her attackers or others. Erdely did, however, seek to verify the account of the rape by speaking with friends and other rape survivors in whom Jackie had confided, as well as university administrators to whom she had reached out to for help.

As the story gained steam, other critics—including Slate’s Hanna Rosin, The New Republic’s Judith Shulevitz and The Washington Post’s Erik Wemple—questioned what they viewed as inconsistencies in Jackie’s story. Jonah Goldberg of the conservative magazine National Review said the account stretched credulity.

Last Friday, the magazine’s editors, who originally stood by the story, admitted “discrepancies in Jackie’s account” and expressed regret for not allowing the alleged attackers the opportunity to defend themselves:

We published the article with the firm belief that it was accurate. Given all of these reports, however, we have come to the conclusion that we were mistaken in honoring Jackie’s request to not contact the alleged assaulters to get their account. In trying to be sensitive to the unfair shame and humiliation many women feel after a sexual assault, we made a judgment—the kind of judgment reporters and editors make every day. We should have not made this agreement with Jackie and we should have worked harder to convince her that the truth would have been better served by getting the other side of the story.

Here is the irony: Erdely did precisely what you’re supposed to do with rape victims. She believed Jackie. She sought to protect her from further harm. But in doing so, she put her story in danger and opened her integrity as a journalist to questioning.

Generally speaking, rapes are difficult to report on because they take place out of the public eye, most often between acquaintances, and there are typically no witnesses other than the victim and the perpetrator. The reporter’s task is especially daunting when there is no accompanying trial to bring about physical evidence or compel testimony; he or she must go about gathering information without the use of subpoenas or search warrants.

The other problem: journalists are expected to remain neutral and maintain a healthy skepticism toward their subjects. In the case of rape allegations, they have the conflicting responsibilities of ensuring they don’t convict the perpetrator in the press or further traumatize the victim. Does the Rolling Stone controversy show that it’s impossible to be a good journalist and be sensitive to rape victims?

The answer is no. But it requires at the same time a sensitive reporter and a victim who is ready and willing to open him- or herself up to the scrutiny journalists must engage in. This is not to say that there is any such thing as a perfect or ideal victim.

It may well have been impossible for Erdely to have found a victim who was raped in college and still attending the school, where he or she would be likely to see the attackers on campus, and comfortable with a reporter approaching them. This person would have not only have had to heal enough to withstand journalistic scrutiny, but also be able to weather the barrage of questions and criticism from the media, fellow students, and the university administration that failed to protect her in the first place. Faced with that challenge, Erdely should have either focused only on alumni (as she does elsewhere in the article), who would have been comfortable with her approaching her attackers, or not have written the story at all.

The complexities and pitfalls about reporting on rape are why many journalists choose to avoid the subject altogether. This, of course, is a problem in its own right. In the case of comedian Bill Cosby, it had the ultimate effect of silencing victims, and allowed a rapist to assault scores of women with impunity for decades.

Around the same time the Rolling Stone article dropped, male journalists Ta-Nehisi Coates of The Atlantic and David Carr of The New York Times expressed regret about failing to address accusations of sexual assault against Cosby. In a recent post, Coates reflects on a 2008 profile he wrote about Cosby for the magazine. “At the time I wrote the piece, it was 13 people’s word—and I believed them,” he writes. “Put differently, I believed that Bill Cosby was a rapist.”

Yet Coates admits he chose not to address these allegations at length or further investigate the claims because:

The Bill Cosby piece was my first shot writing for a big national magazine. I had been writing for 12 financially insecure years. I had just been laid-off by Time magazine. My kid was getting older. I was subsisting off unemployment checks and someone else’s salary. I had just been laid-off by Time magazine. A voice in my head was, indeed, pushing me to do something more expansive and broader in its implication, something that did not just question Cosby’s moralizing, but weighed it against the acts which I believed he committed.

Carr reveals that he did not even consider confronting Cosby about the allegations when he interviewed him in 2011 for a piece for Hemispheres, United Airlines’s in-flight magazine. “I knew when the editors of the airline magazine called that they would have no interest in pursuing those accusations in a short interview in a magazine meant to occupy fliers,” he says. “I did the interview and took the money.”

In these striking admissions, both Coates and Carr show that there is a price journalists pay in daring to address rape allegations. Coates feared it could hurt his career, causing him to suffer financially. Carr, on the other hand, suggests that his editors would never have approved of such questioning.

These journalists, one could say, got off scot-free. Yet Erdely, who is brave enough to take on a story about rape in the first place—and dared to trust the victim—is paying a price that those who actively turned away from the stories or survivors will not.

Rape will always be a hard subject to write about. It goes without saying it is a much harder experience to live through. I recently spoke with Claudia Garcia-Rojas, author of a media toolkit for reporting on sexual violence by the Chicago Taskforce on Violence Against Girls and Young Women, about the criticism of the Rolling Stone article. “What all of these breaking stories about rape show is how objectivity is an impossible standard,” she said in an e-mail. “Media is complicit in reinforcing widely held cultural beliefs, thereby revealing how objectivity often sides with the perpetrator.”

”Reporting on Rape and Sexual Violence: A Media Toolkit for Local and National Journalists to Better Media Coverage”