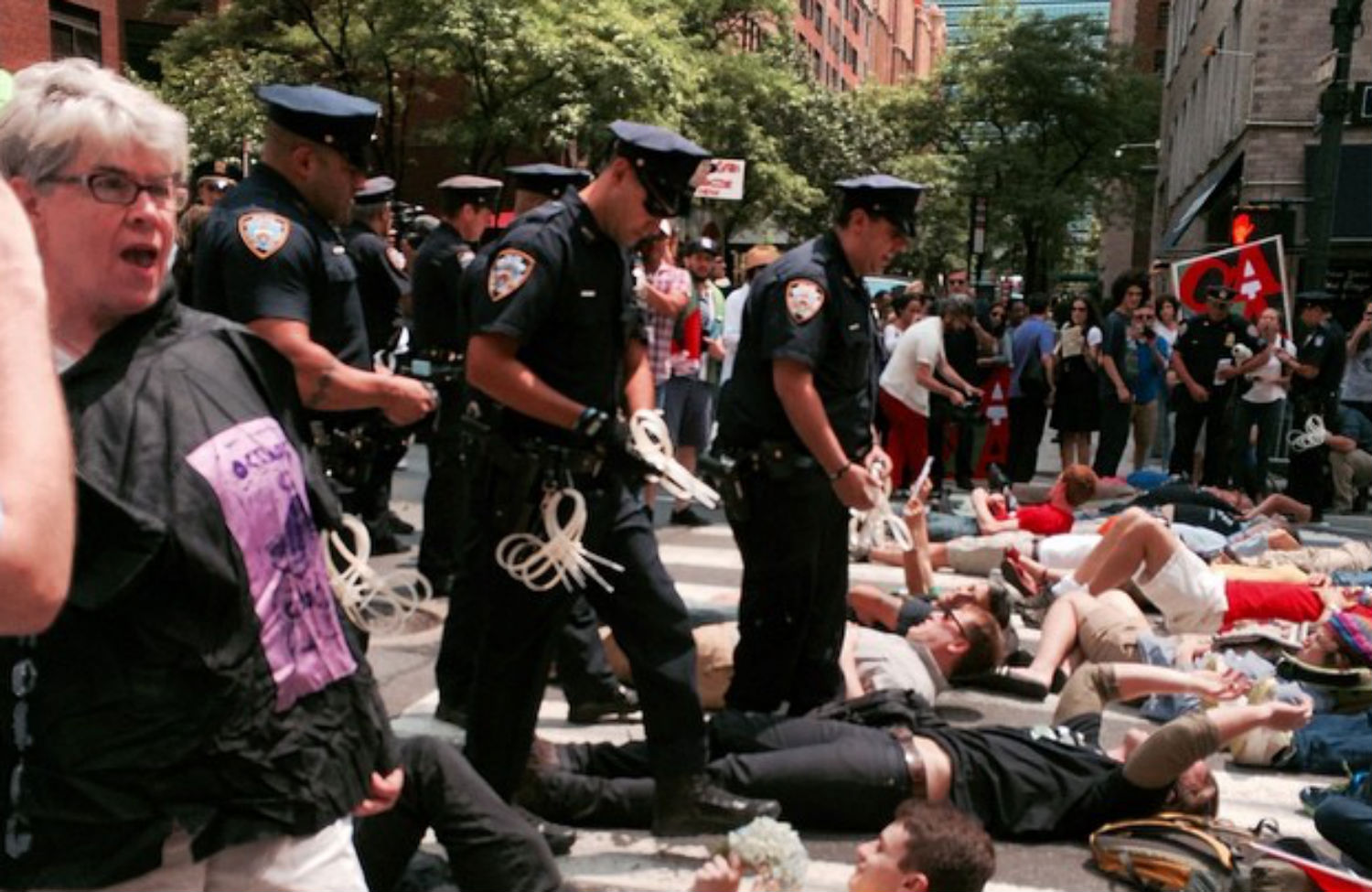 At 12:30 pm today, a few dozen people laid down in the street at the intersection of 43rd Street and Second Avenue, stopping traffic from reaching the 42nd Street block housing the Israeli Consulate. Around them, a hundred or so people chanted from the sidewalks for the end of the occupation and the slaughter in Gaza. The writer Norman Finkelstein, a fierce critic of both Israel and of the BDS movement, had called the protest the day before. “A lot of people feel that going to a demonstration every three days doesn’t rise to the occasion, the immensity of the horror,” he told me. He noted that the Israeli bombing of Gaza is now in its twenty-first day, “which means it’s one day short of Cast Lead,” the assault on Gaza that began at the end of 2008. And there is no sign that this war is going to stop anytime soon.

The action didn’t last long. After issuing a few warnings for the demonstrators to move, the police swooped in, handcuffing people and carrying those who let their bodies go limp. Traffic was stopped for, at most, twenty minutes. Still, it didn’t seem like a futile effort, because this is a moment when it’s particularly important to break through the illusion, which pervades our politics, that American support for Israel and its war in Gaza is unshakable.

Already, there are anecdotal signs that conventional New York opinion, which tends to be liberal on everything except Palestine, is starting to shift. “If Netanyahu is so bothered by how dead Palestinians look on television then he should stop killing so many of them,” wrote Benjamin Wallace-Wells in a piece on New York magazine’s website last week, a sentiment that would have been hard to imagine coming from that publication a few years ago. Today, the magazine’s DC columnist Jonathan Chait, an occasionally hawkish veteran of The New Republic, has a post titled, “Why I Have Become Less Pro-Israel.” According to a recent CNN poll, while a majority of Americans continue to support Israel, 38 percent have an unfavorable opinion of the country, up fourteen points since February.

I don’t want to overstate this—after all, 10,000 people showed up at a pro-Israel rally in front of the United Nations yesterday. Even there, however, there were a couple of people with signs, in English, Arabic and Hebrew, mourning the dead in Gaza. “To the older woman who kept following me with her own ‘Stand with Israel’ sign to block my own sign and yelling out loud—look at the traitor—he’s a mamzer—a bastard—I turned and said, calmly—my father is a Holocaust Survivor, please respect him if not me,” wrote the rabbinical student Amichai Lau-Lavie. “To which she replied—he should have died there. There were other obscene and racist statements that I won’t describe.” People like this woman, obviously, are not reachable. But others might be. What’s happening is simply so brutal and inexcusable that it makes the rote rationalizations of Israel’s apologists sound ever more risible.

So it’s important for people who feel, intuitively, that there is something deeply wrong happening in Gaza to see others fighting for that conviction. Among those who were taken into custody today was Corey Robin, a Jewish professor of political science at Brooklyn College and the CUNY Graduate Center. Robin is a longtime critic of Israel, but he’d never before been arrested over it. “I finally felt like I had to do something,” he said a few moments before lying down in the street. “This is my first time doing this for Palestine. If it’s my first time, it’s going to be somebody else’s first time, if not now, then another time.