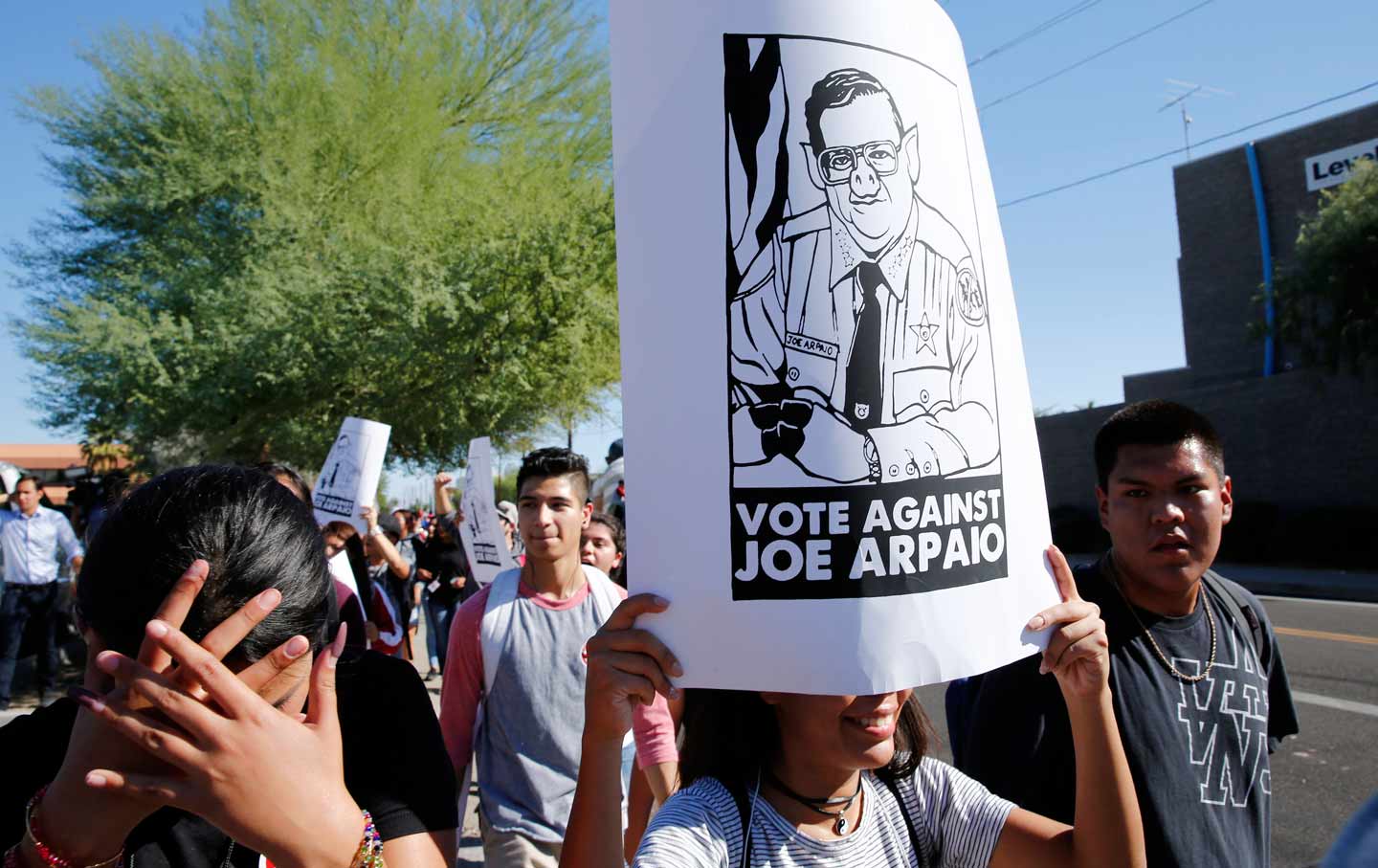 It makes perfect sense that President Donald Trump is headed to Phoenix today.

Trump may have only narrowly won the state in the 2016 election, but he visited Arizona, home to some of his most stalwart supporters, often when he was on the campaign trail. Former governor Jan Brewer, an early supporter of Trump’s, has defended him even after his most recent, and most disgraceful, stumbles. Just last week, Brewer told CNN that she “was not ashamed” by Trump’s defending white supremacists after the violence in Charlottesville.

“I might do it right away,” Trump told Fox News last week about the possibility of pardoning the 85-year-old sheriff. “I am seriously thinking about it.” Trump called Arpaio a “great American patriot” and said that he “doesn’t deserve to be treated this way.” 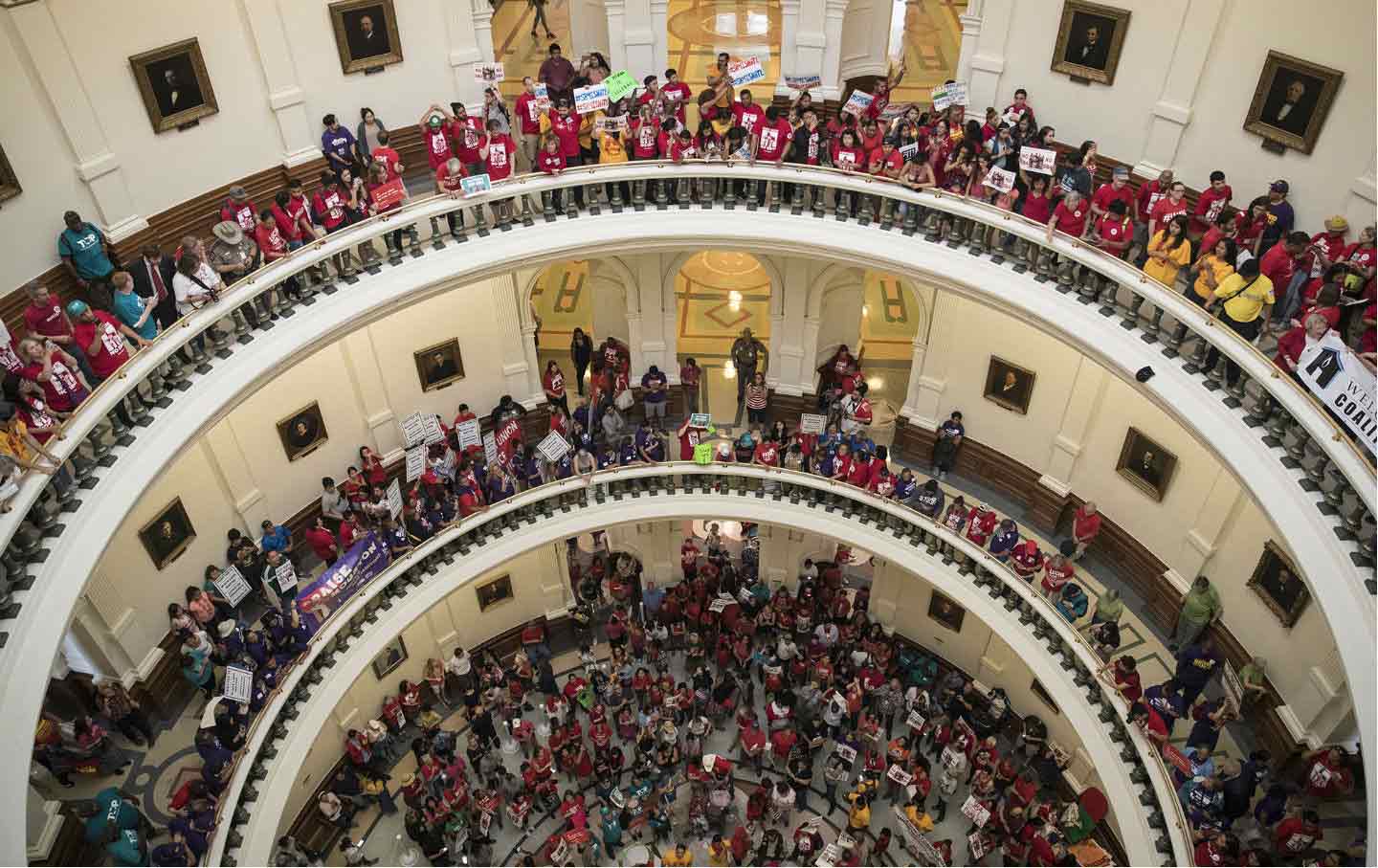 The two are political allies; Trump has borrowed heavily from Arpaio’s brash and openly racist approach to policing immigrant communities. And Arpaio lent Trump his hard-line anti-immigrant credibility, regularly appearing at Trump campaign events and speaking at the Republican National Convention last summer. Arpaio was ousted in the November elections after 23 years in office, but faces sentencing—and a potential six months in jail—in October.

Coming a week after Trump offered his most unequivocal praise yet of the organized white supremacists who have backed him for the last two years, his floating the possibility of pardoning a flagrant racist seems altogether fitting.

It would not only be Trump’s very first pardon, “this would be an official presidential endorsement of racism,” the ACLU’s deputy legal director, Cecilia Wang, said in a statement.

But there are other reasons Trump may be drawn to the state. Arizona is also home to Senators John McCain and Jeff Flake. The two Republican senators have taken on the president’s efforts to repeal Obamacare and shut down legal immigration channels, respectively, and drawn criticism from Trump on Twitter. Flake has repeatedly criticized Trump, did not endorse the president or attend the RNC, and has just published a book decrying Trump’s divisive attempts at populism. Just this past weekend, Flake penned a New York Times op-ed that was a direct rebuke of Trump’s efforts to scale down immigration into the United States.

In it, Flake tells the story of Manuel Chaidez, a Mexican immigrant who “didn’t speak much English…come from money, [or]…finish high school,” and who “had no technological innovation to his credit, nor had he started a business.” Under the Trump-backed RAISE Act, a proposal aiming to slash the number of people who could immigrate legally by imposing stricter standards on those who enter, Chaidez would be ineligible to even apply to immigrate to the United States. (He was able to change his status year ago, Flake notes.) And yet, because of his years of hard work, Flake argued, “in my estimation, Manuel is just about the highest-value immigrant possible, and if we forget that, then we forget something elemental about America.”

Flake is countering head-on the president’s attempt to redefine how we understand immigration reform. For decades, the phrase “immigration reform” has been synonymous with a legislative package that would bolster immigration-law enforcement while also offering some pathway to citizenship or legal status for undocumented immigrants. In Trump’s imagining, however, immigration reform could become something else entirely—an opportunity to slash the numbers of those who would be allowed to immigrate. With the RAISE Act, which Trump has backed, avenues for legal immigration would be limited and the number of legal immigrants permitted to enter would likely be cut in half. (Trump himself would not qualify to immigrate under his plan, a Washington Post analysis found.)

Trump, in turn, has retaliated by turning to Twitter and all but endorsing Kelli Ward, a challenger of Flake’s, who’s up for reelection in 2018. There is no doubt that Trump will use the opportunity to hit again at Flake in the junior senator’s own territory.

Phoenix is also the site of one of Trump’s landmark speeches on immigration, which he gave almost exactly a year ago. In it, he outlined a 10-point plan to target immigrant communities by casting immigrants as lawbreakers and criminals, defunding sanctuary cities, reviving police–immigration agency partnerships, and targeting gang members or those suspected of being in gangs. What’s striking is that, aside from the border wall, which was always his most offensive and most unrealistic idea, Trump has actually been able to translate his campaign talk into action. With the help of Attorney General Jeff Sessions, the Trump administration has been able to compel cities to reject sanctuary-city status by threatening to withhold federal money. The Trump administration has aggressively pursued gang members, or those suspected of belonging to gangs, in immigration sweeps. And in Trump’s first few months in office, immigration arrests jumped 40 percent over the previous year.

Not everyone wants Trump in their city. “I am disappointed that President Trump has chosen to hold a campaign rally as our nation is still healing from the tragic events in Charlottesville,” Phoenix mayor Greg Stanton said in a statement last week. “If President Trump is coming to Phoenix to announce a pardon for former Sheriff Joe Arpaio, then it will be clear that his true intent is to inflame emotions and further divide our nation.”

Pardon or not, and in Phoenix or elsewhere, inflaming emotions and dividing the nation seems to be Trump’s most explicit intent at all times.