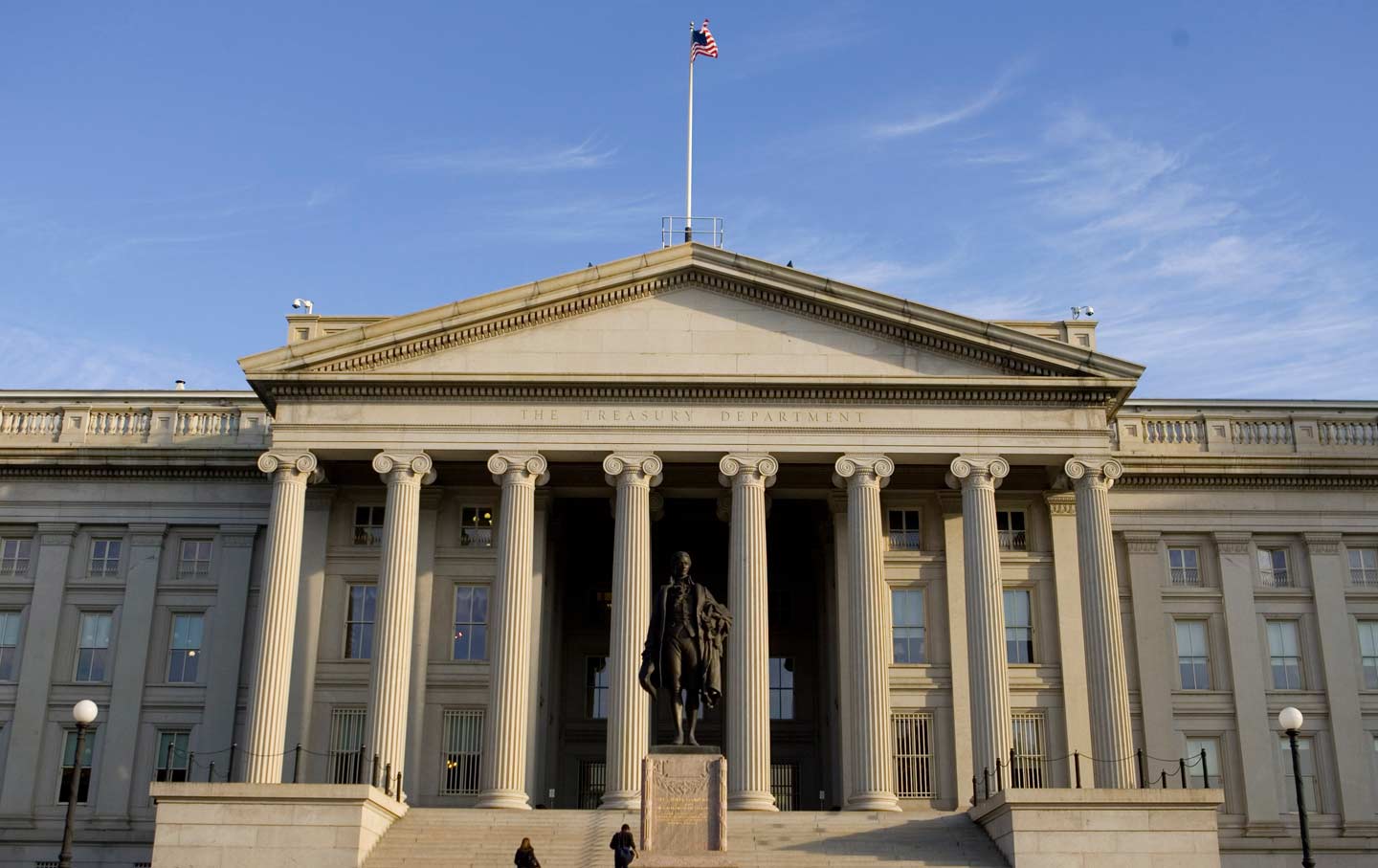 There’s just one problem. The numbers relied upon by Enzi and far too many others inside the Beltway, including the Congressional Budget Office itself, are completely bogus. The methodology used by the CBO to create these projections exaggerates the federal government’s long-term debt projection by as much as 440 percent, creating a phony fiscal crisis where none exists.

In reality, data provided to The Nation by Stephen Goss, chief actuary of the Social Security Administration, shows that starting in 2032 the federal government’s debt held by the public is on track to rapidly decline as a share of GDP, bottoming out at 40 percent. This is in stark contrast to the CBO’s sharply rising debt-to-GDP ratio, which peaks at 176 percent in 2090. How can there be such a large discrepancy in the numbers? The answer is fairly simple. The CBO assumes that Social Security and Medicare Part A will draw on the general fund of the US Treasury to cover benefit shortfalls following the depletion of their trust funds, which at the current rate will occur in 2034.

That would obviously lead to an exploding debt, but it’s a scenario prohibited by law.

In the case of both programs, benefits must be paid either from revenue collected via payroll taxes or from accumulated savings in the programs’ trust funds. When those funds run out, full benefits will simply not be paid. “Because there is no borrowing authority, there is really a hard stop,” said Goss.

Congress could pass a law saying that Social Security and Medicare Part A would begin drawing on the US Treasury general fund after 2034. Or, Congress could preemptively pass laws to avert the situation before the deadline; it could take the approach favored by progressives and increase revenue to the programs by lifting the payroll tax cap, or alternatively raise the retirement age and lower benefits.

But the bottom line is the CBO projections disregard the actual law and assume a worst-case legislative scenario—and one that is politically unlikely, to boot. It’s hard to imagine Congress would simply leave the problem alone and watch Social Security and Medicare Part A devour the nation’s budget.

“Congress has always stepped up and done the right thing, and made changes necessary. Now that is a fact,” said Goss.

Indeed, in 1983, then-President Ronald Reagan and Speaker of the House Tip O’Neill passed legislation raised the retirement age from 65 to 67, among other structural changes.

“[The CBO is] pretending that when we get to 2034 all of a sudden we will borrow a whole bunch of money to pay benefits, when nobody is talking about doing that. There are a dozen of expansion bills that have been introduced and all of them bring in additional revenue,” Altman said. “No one has suggested [funding Social Security through deficit spending] since the 1940s. No one on either side of this debate.”

This is not a small accounting matter. Our national conception of debt distorts the political debate by creating a climate of fear around a potentially bankrupt nation. In particular, a imminent monster debt casts a shadow over progressive policy proposals. Just this week, Senate majority leader Mitch McConnell is floating a budget deal that would cut Social Security benefits and raise the Medicare age.

“CBO estimates are often used as a kind of gold standard in these debates, and when they generate these out-year debt projections that are in the stratosphere, you see a lot of scare mongering based on those numbers,” said Jared Bernstein, senior fellow at the Center on Budget and Policy Priorities, and former chief economist and economic adviser to Vice President Joe Biden. “I interact with politicians all the time who use the threat of future deficits and debt to block not just a progressive agenda but basic investments in public goods like infrastructure and education,” Bernstein continued.

Altman said the CBO’s score “puts pressure on spending. It’s really the conservative agenda to starve the beast…. It’s an attempt to force a crisis where there is no crisis.”

The CBO hasn’t gone rogue here, but rather it’s acting under order of Congress. The CBO confirmed to The Nation that its scoring convention is based on Section 257(b)(1) of the Balanced Budget and Emergency Deficit Control Act of 1985, which states that “funding for entitlement authority is assumed to be adequate to make all payments required by those laws.”

To get at the real picture, Congress could and should simply ask the CBO to correctly score these numbers, or at least note that this score is not consistent with current law.

That would remove a central talking point for austerity hawks who seek deep cuts in federal spending. So maybe we shouldn’t hold our breath. In the meantime, we need to realize that there really is no debt crisis.