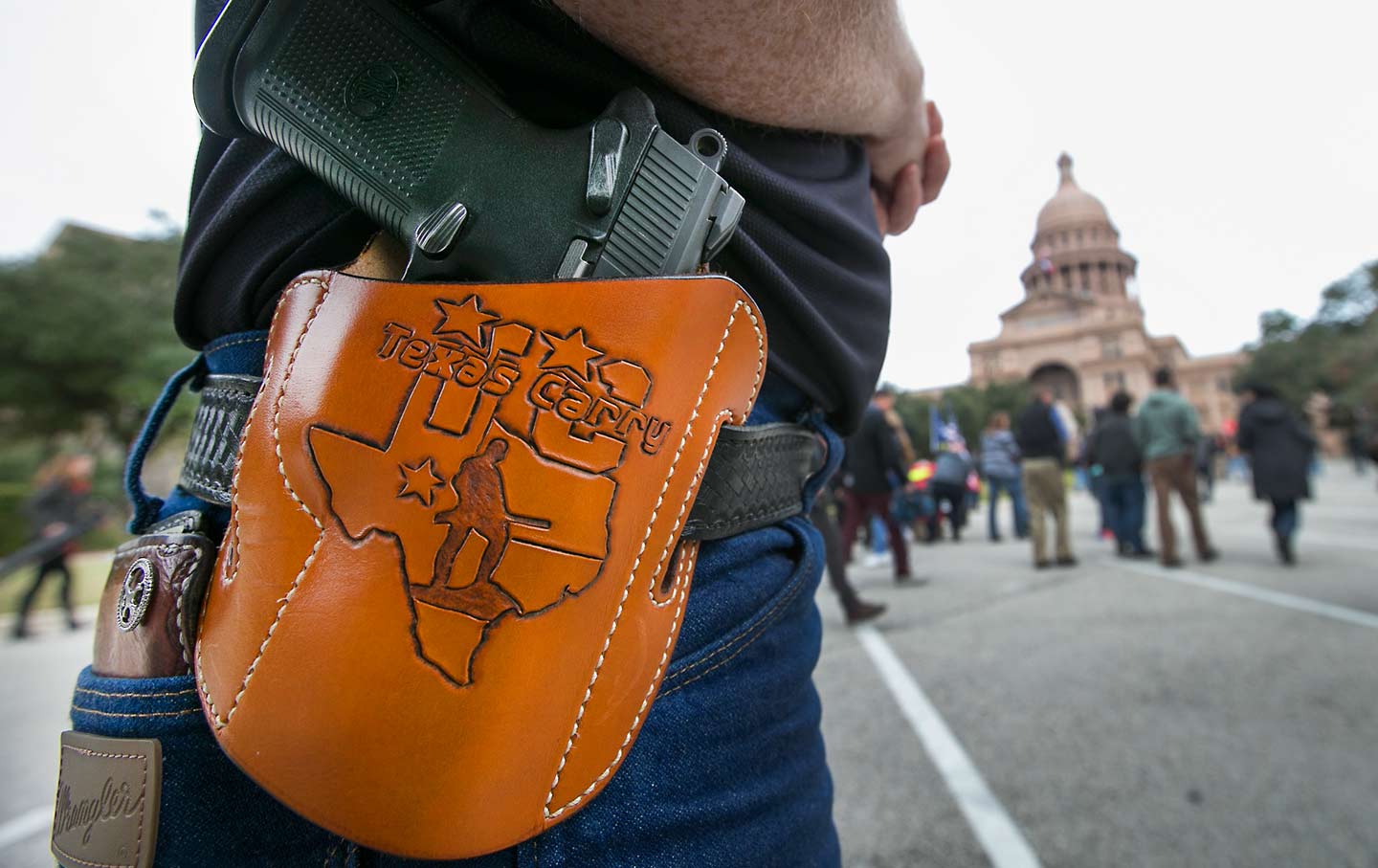 Open Carry Texas holds a rally on the south steps of the Texas State Capitol in Austin to celebrate Texas becoming an open-carry state earlier this year. (Ralph Barrera / Austin American-Statesman via AP)

This article originated with Generation Progress.

It’s that time of year again. Prospective law students around the country must choose which school they will attend. They will compare costs, job prospects, location, and other deciding factors. But, for the first time, students looking at public law schools in Texas must compare a new factor: their safety on campus in light of Senate Bill 11, permitting concealed handguns on public college campuses.

Not long ago, I was one of those prospective students. My law school strategy was simple: cast a wide net and hope something sticks. I applied to a handful of schools, including the University of Texas Law School. My relationship with UT-Austin runs deep. During my time as an undergrad on the Forty Acres, the school gave me a number of opportunities I never imagined possible growing up in rural East Texas. Besides my emotional connection, Texas Law also appealed to me because in the face of rising law school tuition across the nation, it remains a great value compared to private schools.

In an exercise of naïve optimism, I thought SB 11 would not pass, or that the administration might circumvent it, and the issue of concealed carrying would not factor in my decision-making. I was wrong.

The inscription on the UT Tower celebrates the freedom to learn in universities. It reads, “Ye shall know the truth and the truth shall make you free.” The UT Tower is a symbol of learning, freedom of expression, and intellectual discovery. It is also the site of the 1966 Charles Whitman shootings, which left 15 people dead and 32 wounded. Now, campus carry stands to threaten these values, putting students’ minds and bodies at risk, and with them, the future success of UT-Austin.

I have experienced two school shootings in my life: once in middle school when gunfire broke out at the neighboring high school, and once as a freshman at UT-Austin when an unstable student shot at random on campus before taking his own life. I would never wish these harrowing experiences on anyone. Unfortunately, state governments around the country are considering bills similar to SB 11. Other states considering this legislation should look to Texas, and see the fear and frustration facing students and faculty, even before the law has gone into effect.

As an undergraduate, I had many diverse and at times provocative perspectives shape my learning. I learned most by listening to viewpoints different from my own. This freedom of expression makes universities ideal for the safe exchange of ideas. Campus carry corrupts this marketplace and threatens to undermine its very integrity. How can professors teach courses or assign grades with the possibility of violent retaliation one pull of a trigger away? How can students engage one another if the fear of offense is now informed by the fear of safety? Come August 1, the concept of trigger warnings will take on a literal meaning in Texas college campuses.

These concerns heighten when considering graduate and professional programs, particularly the law school.

Two major concerns inform my opposition to campus carry at the law school. The first, numbers. Only students 21 and older will be able to obtain a concealed-handgun license, a fact proponents of the bill love to cite. While these older students make up only a small fraction of undergraduate programs, they make up the majority of the law school. Realizing most of my classmates could potentially be carrying lethal weapons would increase my fear of speaking freely.

These numbers apply to all graduate programs, but my second concern pertains to the environment of law school specifically. Students must grapple with the stress of grades and careers, but also with topics like abortion and marriage equality, adding fuel to the fire. The potential for offense in legal classrooms is high, and adding guns in the mix is dangerous.

SB 11 was only one reason I turned down Texas Law, but it was an important one. Over the past months, UT has felt the impact of campus carry as prominent faculty members have left the school and other recruits have turned it down, citing the new law as a factor. From personal conversations, I know other admitted students express concern over the law, and I imagine the legislation will continue to pose problems as the university tries to recruit exceptional students and faculty.

SB 11 threatens the future of higher education in Texas. As a Longhorn and a Texan, this possibility frightens me, and I hope it does you, too.