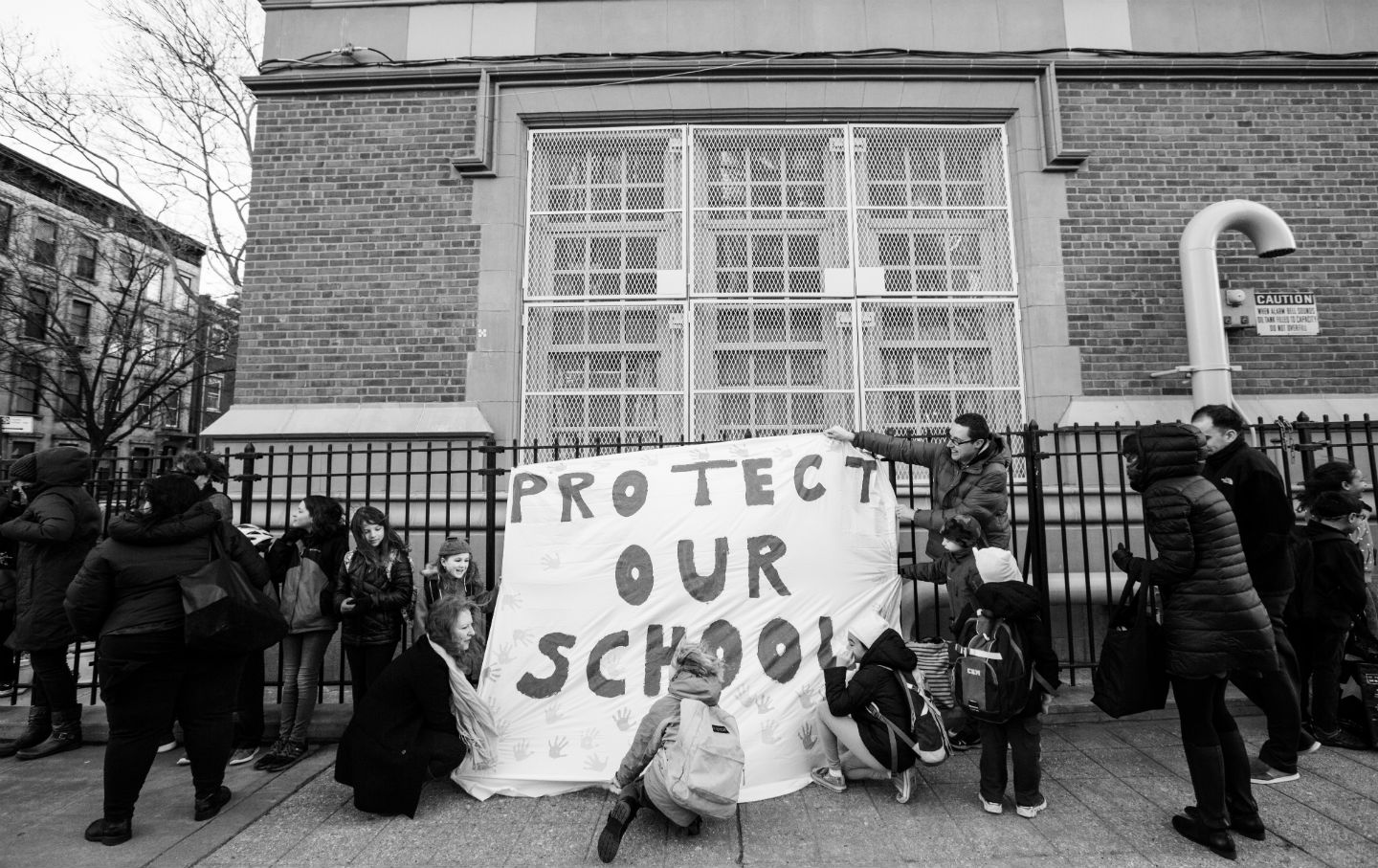 Parents, students and teachers taking part in a March 12 'Hands Around the School' protest at PS 29 in Brooklyn. Photo credit: Julian McCaul

Last week, I issued the following challenge to a dozen third-, fourth-, and fifth-graders: create a paper airplane that flies farther than your peers’. We worked our way through the design process, brainstorming and sketching ideas, talking about the science of flight, crafting prototypes. We tested our planes, worked collaboratively to make revisions to the original designs, and shared our insights and conclusions. By the period’s end, each kid had a plane that flew significantly farther than her first.

Thanks to an in-house enrichment program at my school, these kids and I meet weekly to explore design challenges and engineering-oriented thinking that extends well beyond the curriculum. If Governor Cuomo’s budget—into which he quietly tucked several major changes to education—passes unrevised, schools across NYS will be forced to permanently forsake programs like this along with content not emphasized on the state exams, like social studies, creative writing, the arts, and social-emotional learning.

NYS families, the clock is ticking. On April 1, the NYS legislature will vote on Governor Cuomo’s budget, including his latest reforms to the state’s public-school classrooms. One of Cuomo’s proposals is to overhaul the way teachers are evaluated.

Under the current evaluation system, students’ progress on the state exams accounts for 20 percent of a teacher’s annual rating. Cuomo is proposing that we increase the weight of student test-score gains to 50 percent. (He’d like the other 50 percent of a teacher’s evaluation to come from classroom observations: 35 percent based on a one-time visit from an outside evaluator and a mere 15 percent based on her own principal’s assessment of performance.)

If 50 percent of each teacher’s evaluation is based on the gains her students make on standardized tests, she’ll have no choice but to start intensive test prep in September and continue until the exams are over in May. Students will be grouped strictly by test-score performance and targeted with intervention that addresses them not as whole children but as test-taking beings. And, if you have a child in one of the lower grades where students don’t yet face standardized tests, he’ll have less dramatic play, less time to progress at a developmentally-appropriate pace because he’ll have to be on track to take high-stakes exams beginning in third grade.

Underpinning the logic of these proposed reforms is an increasing reliance on value-added models (VAM), a relatively new statistical model designed to supposedly determine how much a teacher should improve her students’ scores. The problem? Organizations like the American Educational Research Association and the American Statistical Association have specifically warned against using VAM to evaluate teachers. According to the ASA, a teacher accounts for only 1 to 14 percent of the variability in a student’s test score; moreover, when it comes to students’ test-score gains or losses, VAM can reveal a correlation between a teacher and her students’ scores, but not causation. And, the practice has a whopping margin of error of up to 53 points.

As a public-school teacher, I want to be evaluated. But there are much more effective ways to do it. The countries and states that consistently outperform New York on standardized assessments—Finland, Japan, Massachusetts, among others—have successful evaluation systems in place that could help shape New York’s. In these places, test-score gains play no role in a teacher’s evaluation. Instead, multiple measures are used to evaluate the efficacy of a teacher’s performance: principal and peer observations, student and family feedback, professional development. Why not borrow a page from corporate America’s playbook to provide teachers with a 360-degree view of their performance?

But families, this fight isn’t about teachers. It isn’t about a flawed, statistically unsound, uninformed teacher evaluation system—though it could be. I’m not asking you to stand up and raise your voices to protect us teachers. I’m asking you to stand up and protect your children. To protect the kind of teaching and learning that empowers kids to be critical thinkers—to ask questions and not just answer them; the kind of teaching and learning that enables kids to be curious—to shape and manipulate data and not just be shaped and manipulated by data; the kind of learning that deeply engages students and teaches them not just to fill in bubbles on a multiple-choice exam, but to actively seek knowledge about themselves and the world around them.

Families, we have until April 1. A groundswell of opposition is building fast. Assembly Democrats have opposed Cuomo’s education reform plans while hundreds of New York City schools have rallied and taken public stands against the governor’s proposals. Tell Governor Cuomo and your state representatives you want the education reforms pulled out of the budget, revised, and voted on as a stand-alone issue. And sign the New York Teacher Letter (www.nyteacherletter.org) to express your disapproval of the governor’s proposed education reforms.

An unhealthy obsession with high-stakes testing and the aggressive collection of test-related data has already prompted many schools to do away with enrichment programs like my engineering cluster. If Governor Cuomo’s public-school agenda prevails, all schools—including mine—will be forced to forsake content and programs that advance inquiry, critical thinking, collaboration, and social-emotional learning.