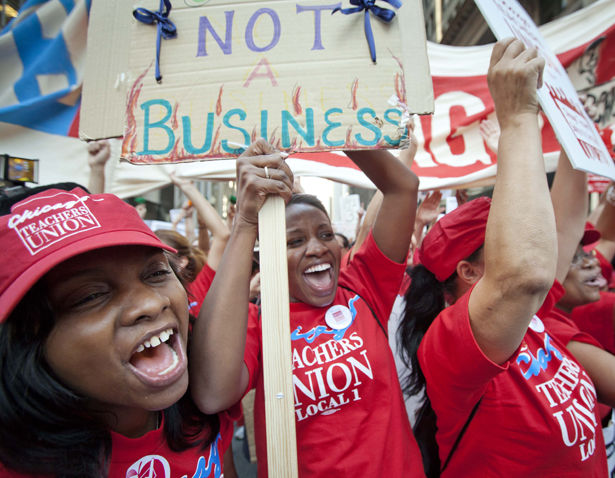 A new report out today asks why black women—who are overrepresented in low-wage sectors of the economy that have produced recent organizing successes, including in retail and fast food—aren’t a stronger presence in labor movement leadership. The report, called “And Still I Rise” and published by the Institute for Policy Studies, asks what it will take for these women to lead the movement and change the public perception of who a union boss is.

There’s a reason black women, who lead all women in labor force participation, readily join unions, the report argues. They face significant discrimination and wage inequality in the workplace, earning 64 cents on a white man’s dollar. They’re also three times more likely than white women to be single heads of households with children, so when it comes to finding good work and getting paid what they deserve, the stakes are even higher.

“You have this perfect storm of conditions that make black women particularly receptive to organizing,” Kimberly Freeman Brown, one of the report’s authors told me. That they are receptive is born out by data that looks more broadly at non-white women. When women of color make up the majority of the workplace, and they’re being organized by women of color, the union election win rate is 90 percent—the highest for any group.

“When women of color are organized by other women of color, we win,” Brown said. The problem is getting these women—and as “And Still I Rise” argues, specifically black women—into that role of organizer or more senior positions in general, so that they can help shape the direction of the movement. Right now, the numbers don’t look good. The report includes findings from a national survey of more than 450 black women who are rank-and-file union members, organizers and worker’s rights activists. According to the survey:

• 65 percent said they aspire to become a union leader
• Less than 3 percent reported having held elected positions, and less than 5 percent had served as president of a union or labor organization
• Less than 20 percent reported having held senior staff positions at director level or higher
• 70 percent said unions had invested in their leadership development, but almost 50 percent said that they felt impeded in using their leadership potential because of a glass ceiling

“And Still I Rise,” which borrows its title from the refrain of a Maya Angelou poem, goes beyond the numbers and includes rich narratives drawn from interviews with more than two dozen black women active in organizing for workers’ rights. Their stories point a way toward the answers to the questions that the survey data raise.

Once women are engaged in the movement and want to advance, mentorship is key, several of the women interviewed report. “It was always men who helped to mentor me from one spot to the next,” Clayola Brown, president of the A. Philip Randolph Institute—a wing of the AFL-CIO focused on racial justice—tells the interviewers. “And in the beginning it was mostly white men in trade union organizations who came from similar family backgrounds as mine.”

The report’s authors say they hope that stories such as Brown’s will help leaders in the labor movement and the broader progressive community learn how to replicate models that have worked in cultivating leadership.

Something’s working in Los Angeles, where the staff of the Black Workers Center is predominately made up of women and chaired by Lola Smallwood Cuevas. She’s one of the 27 women whose narratives and beautifully photographed portraits are included in the report.

To her, there’s nothing new about black women’s leadership, especially when she looks at the history of worker mobilization in Los Angeles. There, vibrant organizing among home care and hospital workers are often associated with non-black immigrant communities. Smallwood Cuevas points to black women such as Ophelia McFadden who helped pave the way.

“When you see the early photographs, they were black women,” Smallwood Cuevas said of the roots of these more recent efforts. “The idea that these could be good jobs started in the souls of black women.”

Freeman Brown said the labor movement can make sure histories like these aren’t lost by consistently lifting up the women featured in the report as spokespeople and acknowledging them as the key strategists they are. The report should also be used to stimulate conversation between labor and women’s rights movement organizations, she said, so they can jointly decide “what a women’s economic agenda looks like that’s fashioned through not just gender but also race.”