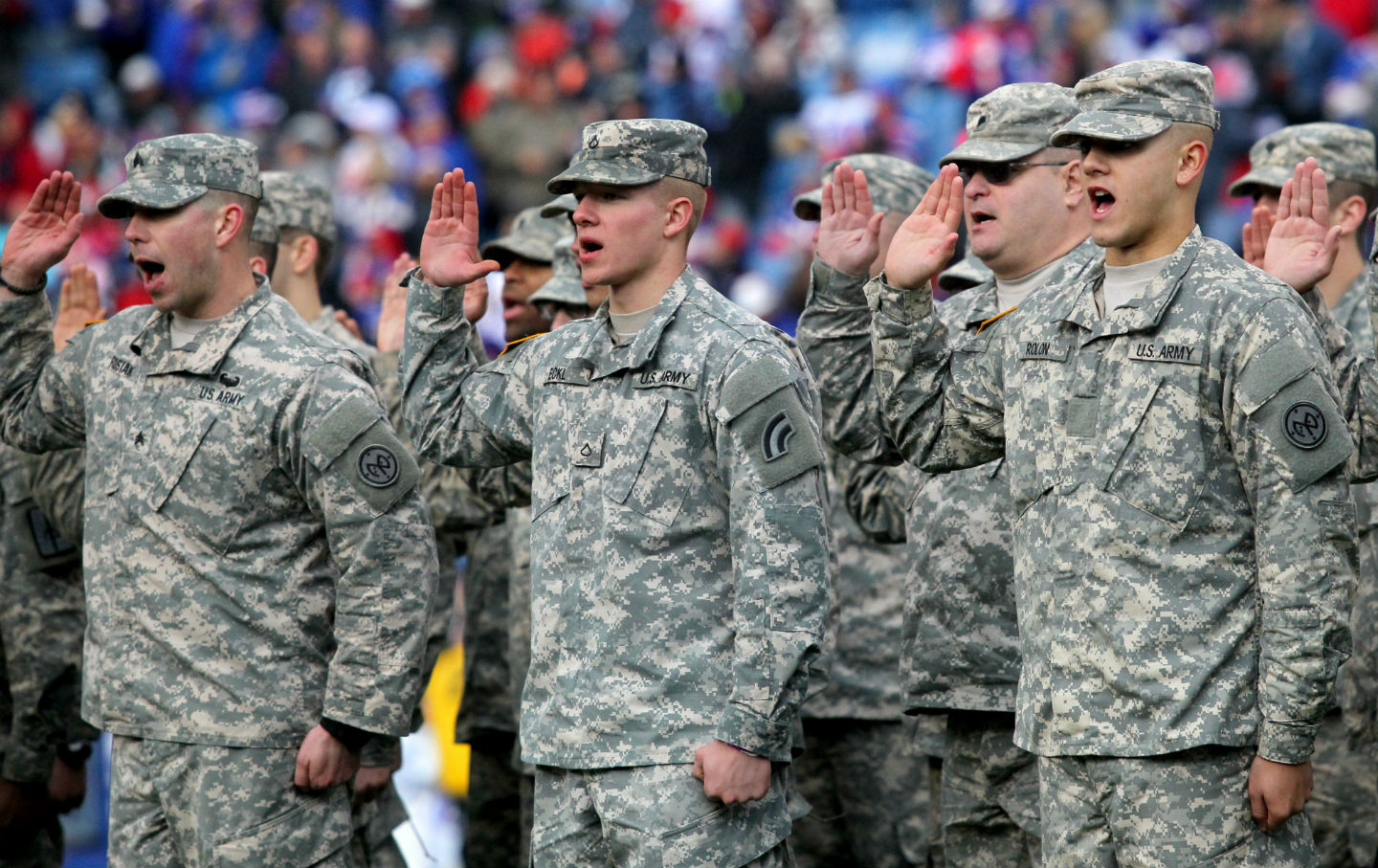 New York National Guard members are sworn in during halftime of a game between the Buffalo Bills and the Kansas City Chiefs. (AP Photo / Bill Wippert)

All-star first baseman Carlos Delgado was not a fan of the numerous military appreciation events taking place at the ballpark a decade ago. These were staged to bolster support for the Iraq war and doubled as recruitment stations, using sports to increase the ranks of the armed forces, which had thinned dramatically after George W. Bush decided to call for a permanent era of armed conflict. As Delgado said, “I won’t stand for this war.… It’s a very terrible thing that happened on September 11. It’s [also] a terrible thing that happened in Afghanistan and Iraq. I just feel so sad for the families that lost relatives and loved ones in the war. But I think it’s the stupidest war ever.”

Now we can not only see that these events were politically transparent propaganda for a flagging war effort. We know they were paid for by us. We know that the US Department of Defense doled out $5.4 million from 2011 to 2014 to fourteen NFL teams to stage these warm-hearted “Salute the Troops” events, as well as do product placement, advertising, and “casual” (otherwise known as “subliminal”) mentions.

National Guard spokesman Rick Breitenfeldt, in a statement that was actually supposed to defend and explain this practice said,

This isn’t, as some might think, payment for unfurling a flag or to welcome a soldier home on the field. This is more about spending for marketing and advertising, for signage, for website takeovers.… We have hundreds of [sponsorship agreements] with teams, including minor league baseball and at high school. We have found that spending in sports to help us recruit in our 18-24 demographic works out for us.

It’s that last part which really singes the eyes. Far too many people are outraged about this story just because the taxpayers were on the hook for something people thought was being underwritten by red, white, and blue NFL owners. Hell, this story was originally broken (in part) by Arizona Republican Senator Jeff Flake railing against “pork-chop” spending. Granted, the idea of any of our money going into the welfare-king pockets of NFL owners is stomach-churning. But the highly manipulative recruitment practices aimed at “18-24 year olds,” which Jeff Flake has no problem with, are being let off the hook. I know as the expression goes, you throw your line where the fish happen to gather or as Willie Sutton said, “I rob banks because that’s where the money is.” But this isn’t like opening a new gourmet burrito food truck in a neighborhood going hipster. This is preying on the young and using their love of sports to lure them into the arena of war. While football and fighting in war have traumatic brain injury in common, everything else—from the military metaphors used by announcers to the four-star-general fixations of head coaches (even NBA coaches think they’re fighter pilots!)—is worlds apart.

It would be wise to listen to the mother of the one NFL player who made that journey from “combat” on the field to the real combat overseas, the late Pat Tillman. As his mom, Mary, said to me last year, “A feeling of camaraderie is important to all humans and I think the camaraderie of sport provides the most reward. Many young men join the military in order to get that feeling of belonging, that feeling of brotherhood. It is irresponsible to try to entice young people into military service with subliminal messages.”

Now we know: not only subliminal but on our dime. One thing is certain: Carlos Delgado was right a decade ago. This is just the stupidest damn war ever.