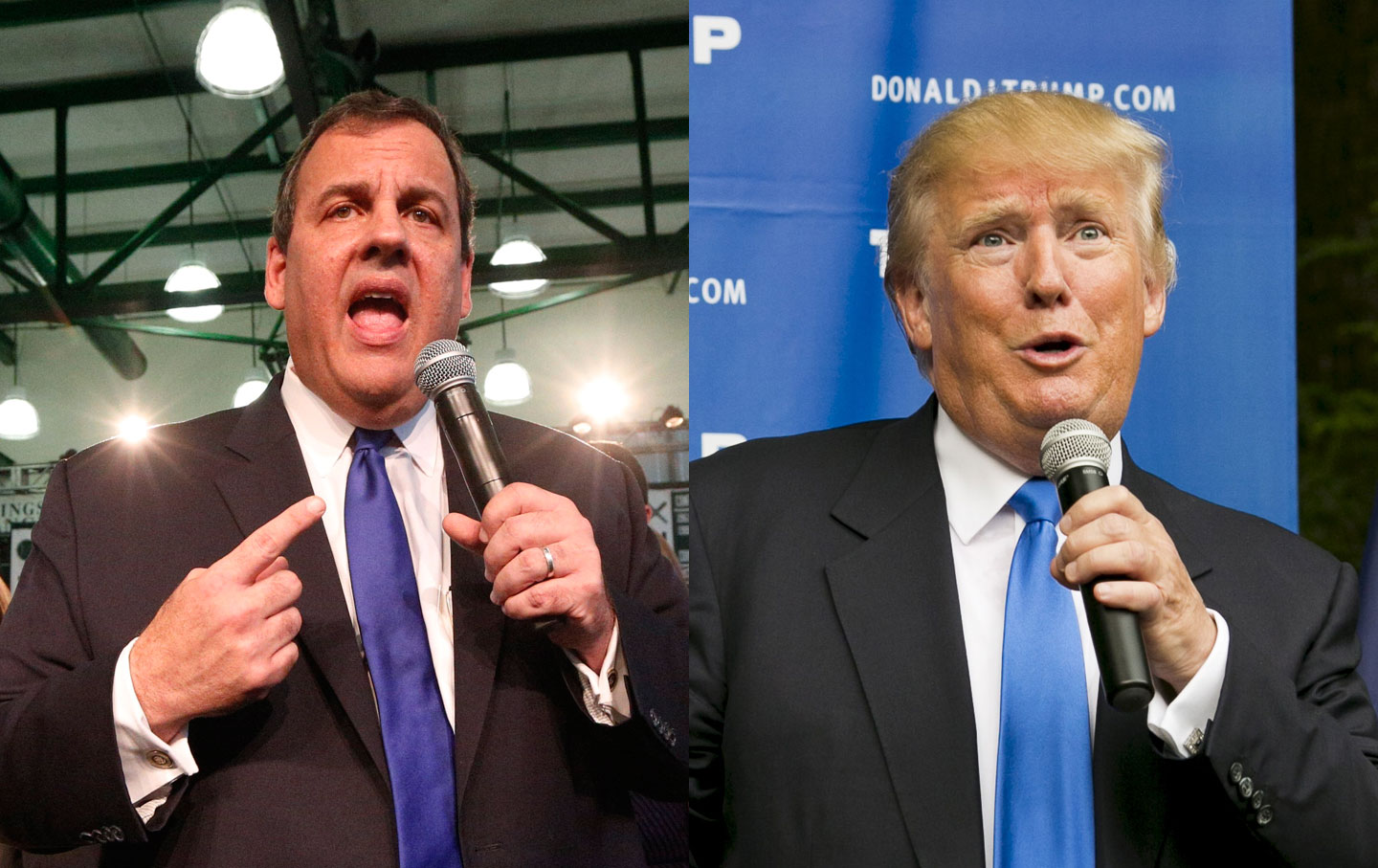 The latest Iowa poll shows the New Jersey governor at the back of the pack at number 15 out of 16 Republican candidates. He ranks with Trump as the only GOP contender with negative favorables: Trump’s under water at 42-47 percent, but Christie has nosedived offshore at 25 to 59.

On top of that, Christie’s racking up his most miserable poll numbers ever in my state of New Jersey. (Thanks, neighbors, for finally coming around!) A majority want him to resign, his approval/disapproval ratings are at 36/58, and 69 percent think he’d make a lousy president.

But polls, schmolls. “After I’m the nominee, it’ll cycle back up,” the governor said on Morning Joe Monday.

Yikes. That’s the reverse of how it works: You go up in the polls, win votes, and then you win the election.

Of course, all politicians profess confidence and push lame excuses in the face of sinking popularity. Only Chris Christie clings to the stern of the Titanic and claims he can see his house from up there.

When Megyn Kelly cited an April poll that found the majority of New Jerseyans don’t think he’d make a good president, Christie insisted that was a positive thing. “A lot of those people in that 65 percent want me to stay,” he told Kelly, adding that the (pre-approved) people he packs his “town hall” meetings with tell him: “Don’t leave to run for president because we want you to stay.”

So was he lying or was he delusional when he explained the problem away by saying, “I think people hear the question they want to hear”? After all, he apparently hears nothing else.

To fact-check his bizarre logic, a Monmouth University poll last week asked those who said he wouldn’t make a good president, Did they believe that because they don’t want him to leave, or because they thought he’d make a bad president? A towering 89 percent confirmed the bad-president option.

On Morning Joe, Christie said, Ah, lots of governors running for POTUS poll poorly at home, and What do you expect after the media’s made me out to be “Attila the Hun”? The liberal media should apologize.

“Three different investigations have verified exactly what I said the day after this incident happened, that I have no knowledge of it and had absolutely nothing to do with it,” Christie said on Fox News Sunday.

“Now that there’s no truth to what they said, they say, ‘Oh well, he didn’t do anything, but he created an atmosphere.’ That’s what the liberal media does rather than saying I’m sorry, which is what they should say.”

“When you’re exonerated, then the people who wrongly accused you should have the guts to stand up and say I’m sorry, but of course these people don’t do that,” Christie said.

But this “exoneration”—including one by a private attorney he appointed to “investigate” and paid for with taxpayer money—is just one of his many recent lies. In an editorial titled “After 14 years of watching Christie, a warning: He lies,” Tom Moran, editorial page editor of the New Jersey Star-Ledger (disclosure: my husband writes there) ran down those whoppers—about pension reform, Hurricane Sandy relief, gun control, and cuts in Planned Parenthood. On exoneration, Moran wrote that Christie’s contention that “The U.S. Attorney said in his press conference a few weeks ago there will be no further charges in the bridge matter” is “not even close.” “U.S. Attorney Paul Fishman said the investigation continues, and that the two indicted Christie aides could wind up pleading guilty, which would yield a new trove of evidence.”

“The man has lost touch with reality” an earlier Ledger editorial said, for even thinking that “he can win the presidency when New Jersey is in such rotten shape after his six years in office.”

But only the local media are shouting “The emperor has no clothes!” The Beltway press, Moran wrote, “can’t be expected to know this stuff. Which is why Christie prefers to sit down with the national press. It’s easier to get away with these lies. For now.”

Even after that warning shot, the national media still aren’t confronting Christie; they’re still pretending the emperor is wearing a three-piece suit. Joe Scarborough and his crew were polite enough to let Christie’s little lies slip (like that he made a good-faith effort to have a real conversation with the heckler whom he infamously told, “Shut up and sit down”). They laughed at Christie’s jokes, even as they were undoubtedly laughing up their sleeves.

And even in covering Christie’s fade-out, the mainstream media at large still allow him to maintain the canard that he’s a guy who just can’t help but tell the truth; they even reiterate his campaign slogan, that he’s “telling it like it is.” Media Matters provides fresh example after fresh example of this suck-up narrative here.

That said, with the Iowa caucuses still seven months away, Christie can’t escape the long arc of media scrutiny, shallow though it may be. Like Donald Trump, the other GOP loudmouth from the New York City area, Christie is a creature of the media capital, and he will rise and fall by it. Everything Christie does from now on will be interpreted in the context of Bridgegate; for Trump, the ongoing media context will be his remarks that Mexicans are “rapists” and drug dealers.

But in one respect, the narcissistic real estate developer may be a bit less delusional than the narcissistic, ill-tempered governor. After being dumped by NBC Universal, Univision, Televisa, Macy’s, Nascar, and Serta, Trump seemed to admit that he can’t simply sue his way out of the backlash.

“You know, maybe I’m leading in polls, but this is certainly not good,” he also said. “I lose customers, I lose people.”

But by Monday, Trump had reverted to type. In an 800-word statement, he tripled down on his “rapists” comments and added the old, disproven slur that “tremendous infectious disease is pouring across the border.” That was just hours after Christie had shown up on Morning Joe to say Bridgegate was behind him and that as soon as he wins the nomination his poll numbers will go up.

One man’s delusion is gold-plated, the other’s is armor-plated, and it’s hard to decide which is more totally awesome.