Philadelphia—Whatever else you might say about the simultaneous strife and celebration at the Democratic National Convention so far, one thing seems clear: There’s a political energy in the Democratic Party in 2016 that hasn’t been seen in years. Young people especially, who have wondered why they should waste time on a system that stifles their voices and ideas, are leading the charge in protests and marches, panels and discussions. Seasoned activists are marveling at the energy. We headed to the Pennsylvania Convention Center and its surrounding streets to talk to first-time voters, Democratic swag-hawkers, and everyone in between. 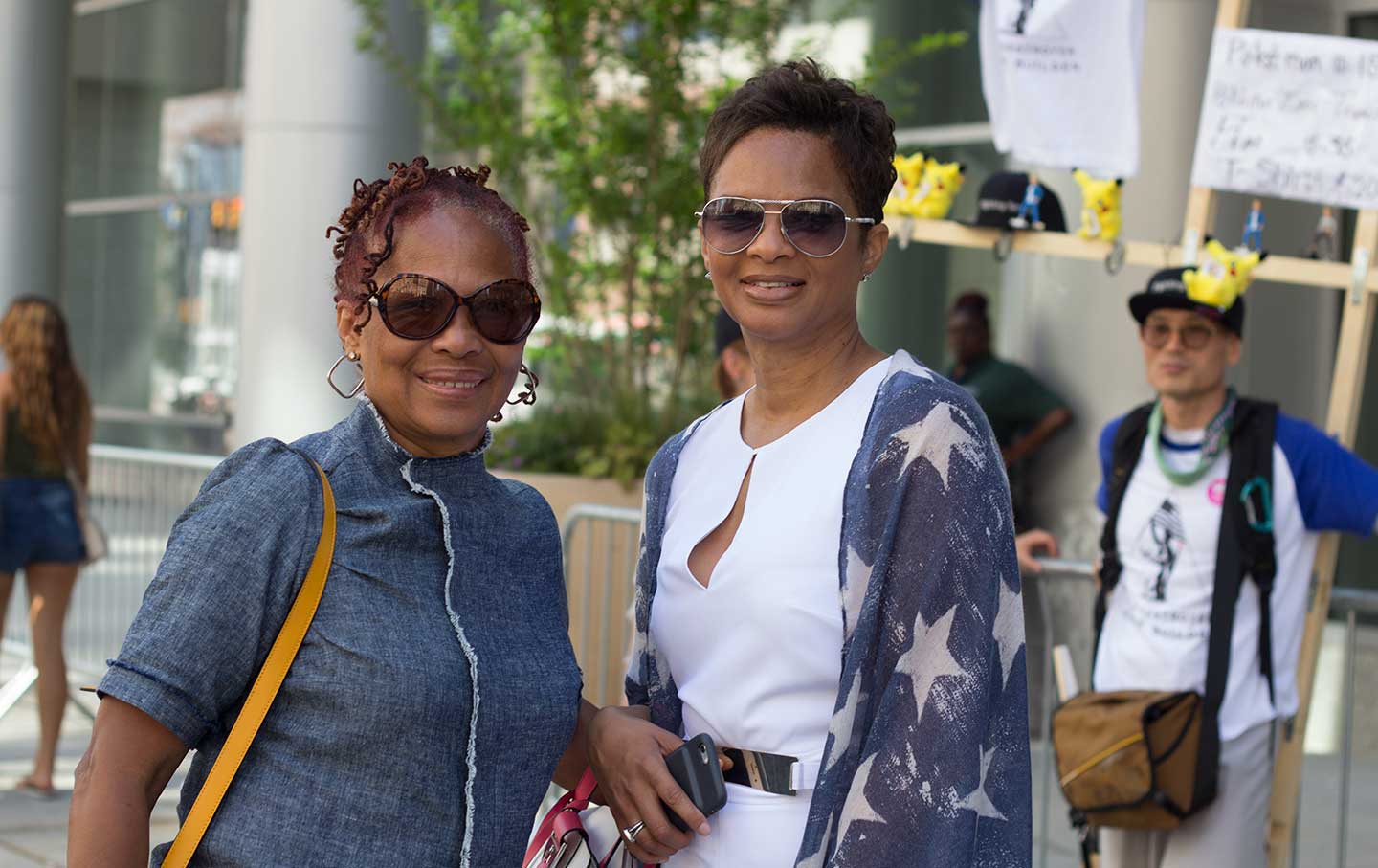 Shonda Scott (“under 50”) and her mother Frazer Scurry-Scott (“over 50”) flew from California to see Hillary Clinton accept the nomination. Watching Clinton’s face shatter the pixelated glass on the screen last night, Shonda said, gave them both chills. “To see what I’ve seen,” Frazer added, “we have a long way to still go, but we’ve done a lot. So when I hear Donald Trump saying he’s going to take the country back, I want to know: Which country are you taking back? Because this one doesn’t belong to you. It belongs to us.” 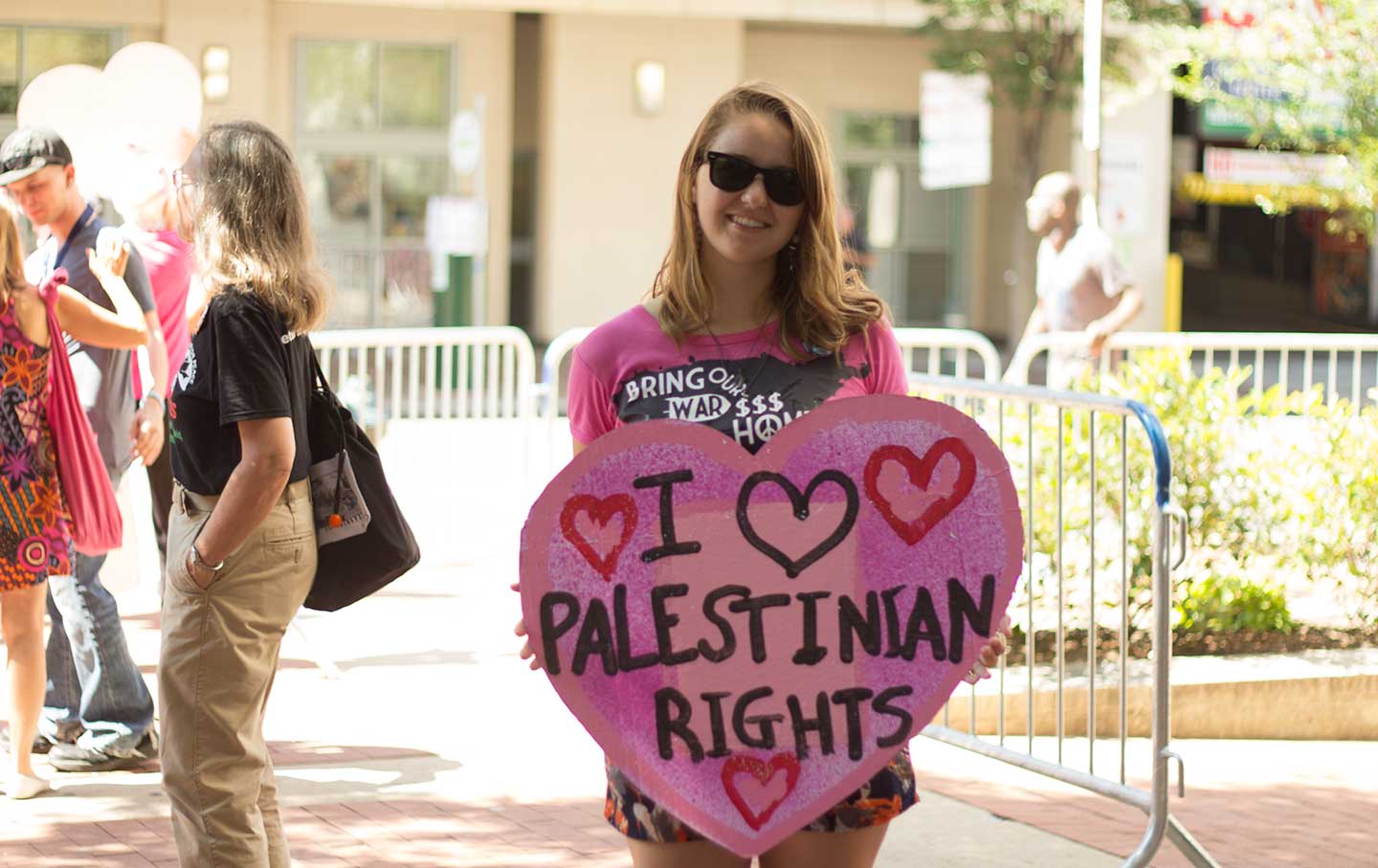 Over the chants of fellow protesters from advocacy group Code Pink, 20-year-old Rebecca Green set aside her sign (“I love Palestinian rights”) to describe her conflicted feelings. Hillary Clinton isn’t doing enough on the issues she cares about, said Green, a sociology major at Northeastern University, and she’s tired of Clinton’s lies and hawkishness. But she just came from last week’s Republican National Convention, and that environment of hate and fear made an impact. “I fear Trump more than Hillary,” she said, adding that though she knows the party is divided, she’s proud to see so many people taking to the streets. Yesterday, she watched as two protests turned into a street-blocking sit-in, which later converged with a third march. “Despite my feelings,” she said, “it’s really powerful to see.” 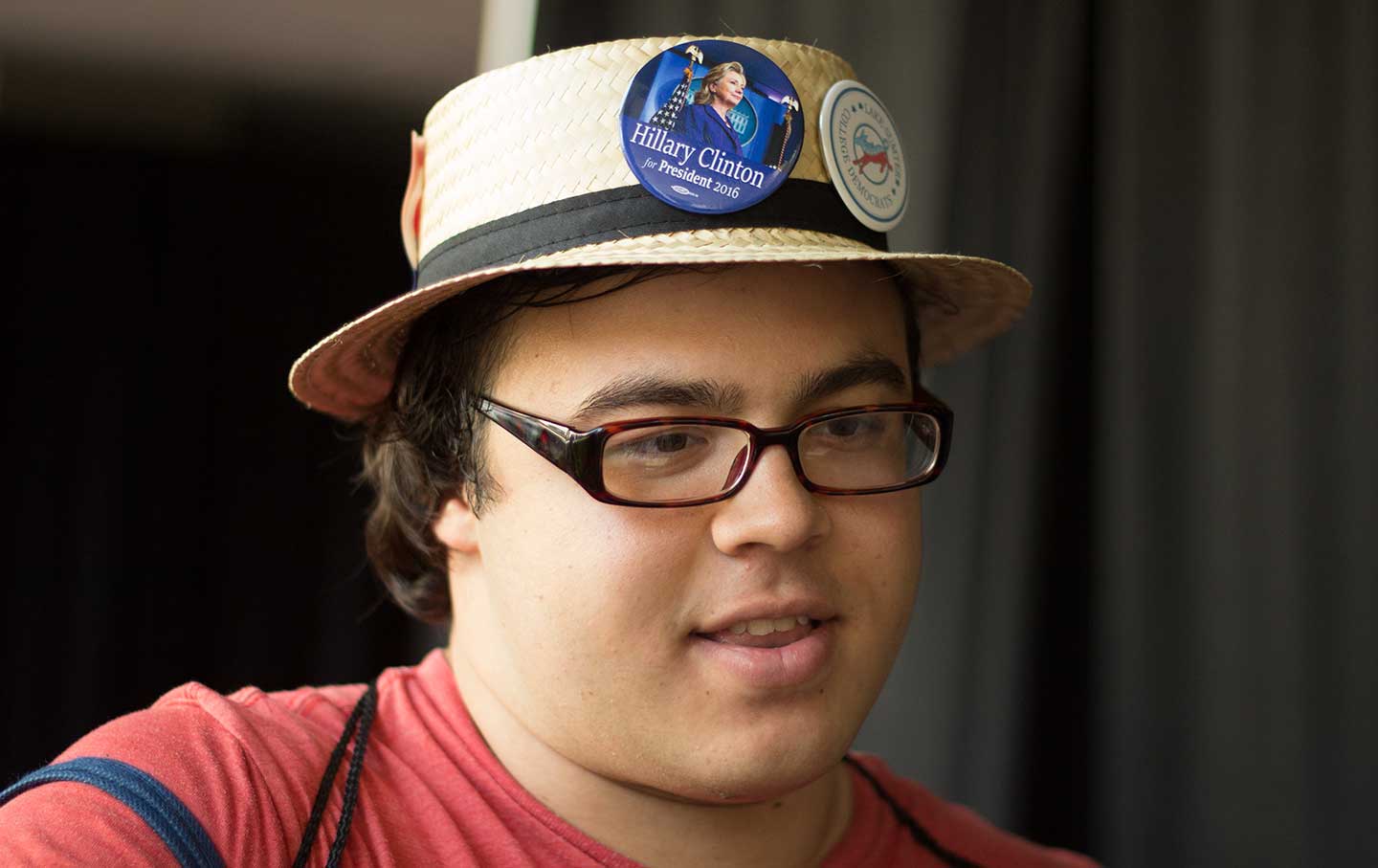 Twenty-year-old Chayeh McMullen, three other students, and their professor raised money through car washes to get from Lake Sumter, Florida, to the convention. “We applied to be delegates, but none of us got it,” he said. This is just for fun. Because he and the rest of his group live in a 45 percent Republican county, he said, the group constantly canvasses, registers voters, and holds phone banks. “That’s what’s making a bit of a difference. A little bit.” In the meantime, he’s voting for Clinton. “I just don’t think supporting third parties will help America progress. Support them in local elections, not in presidential elections.” 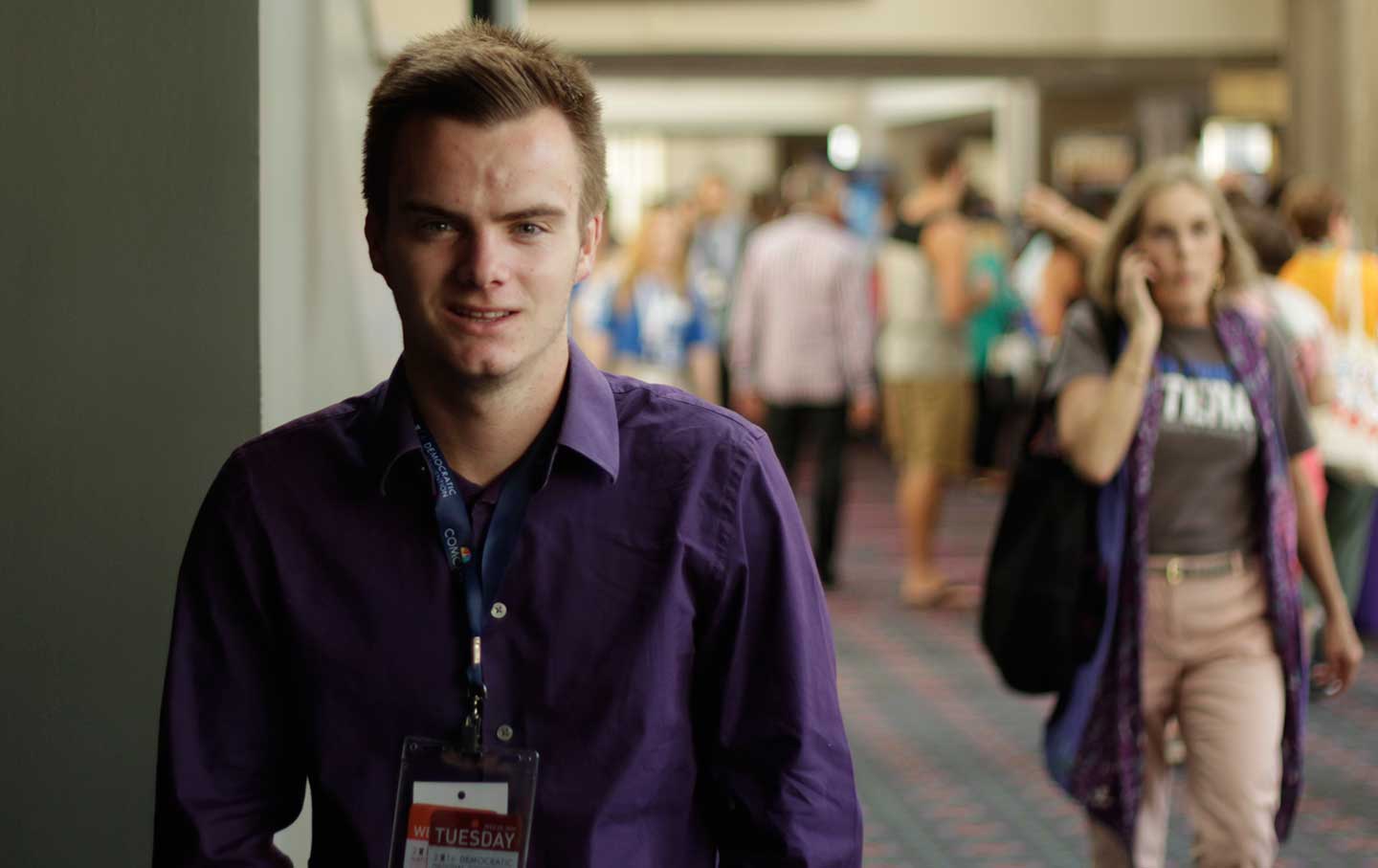 Bob Canfield, 18, flew alone from a small town in California to attend the convention as a delegate. He just graduated high school. “This is my first election that I get to vote in,” he said. “But I decided that I really wanted to do more than just vote…. politics is what defines us as a people. It sets up the rules that we live by. I hope that everyone gets involved in politics, old or young, but especially young people, because we are the future and we have the most capacity to make change. We have to realize that, and take initiative.” Canfield would come home from school every day and work on a phone bank for Bernie Sanders until 9 pm, racking up 2,400 calls by the end. He hopes that he will be ready to vote for Clinton by November, but he has a caveat. “She has to convince me that I can trust her to tell the American people the truth,” he said, “and to be consistent and follow through with the promises she makes, and that she can represent the progressive values that Senator Sanders does.” 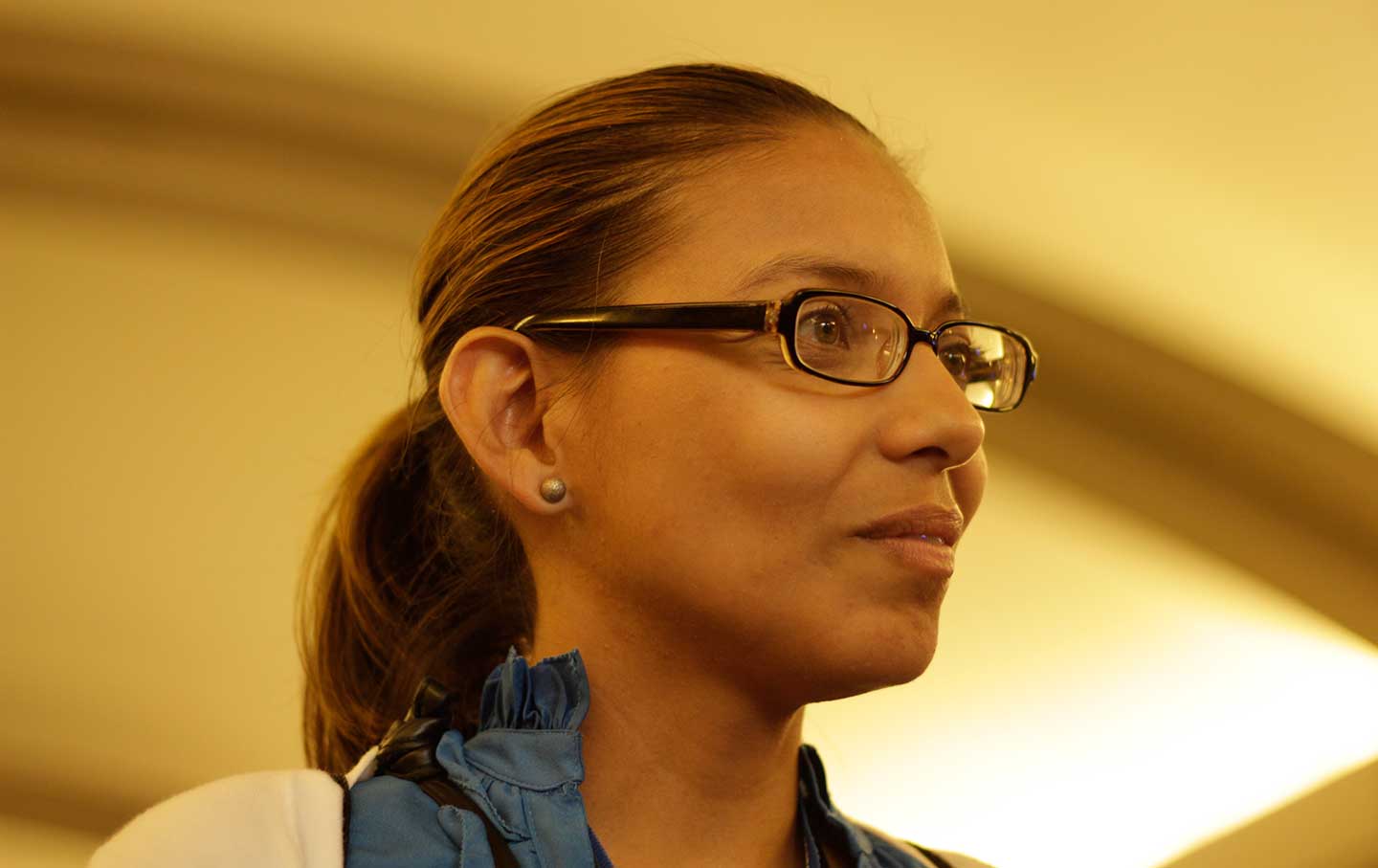 Gabriela Mosquera, 36, represents over 200,000 people in New Jersey as a state assemblywoman, so she said she sympathizes with Clinton, whom she’s proud to have as her candidate. “As a president, she’s going to be facing tough decisions. But as long as she keeps in mind the people of America and doing what’s best for everyone—and it’s not easy, trust me.” She shook her head. “I hope I don’t cry when she gives her speech tomorrow night, but if the tears run out, they run.” She said that it feels powerful to be present for the nomination of the first female candidate for president, a moment that demonstrates to young girls like her niece that they can do the same. Her voice broke. “Oh, now I’m going to cry,” she said, then laughed it away. “She will succeed. I’m confident that she will succeed.” 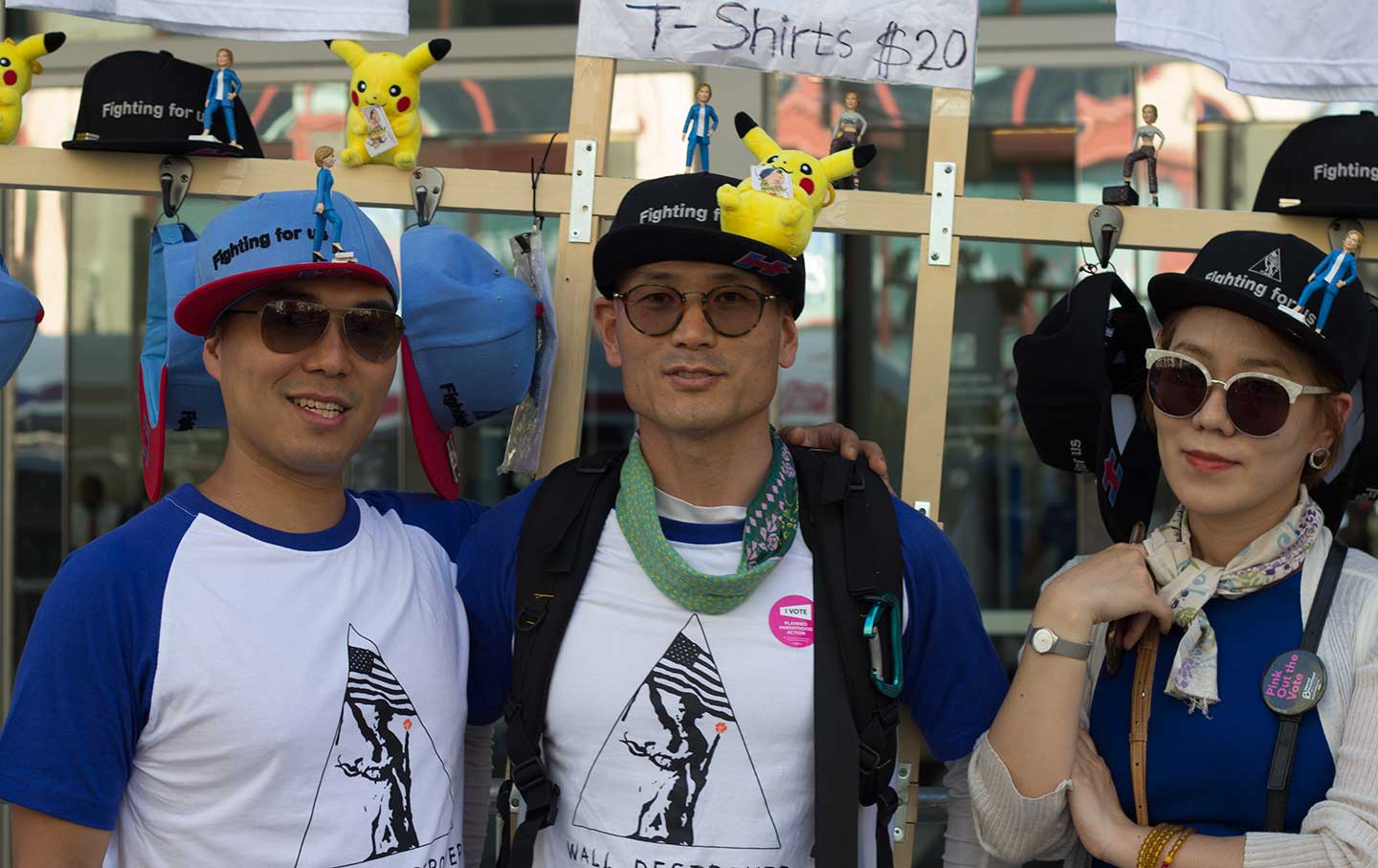 Jin Ho Kim sells baseball caps with magnetized Hillary Clinton action figures perched on their lids. “We think they’re going to take off,” Kim said, motioning to two friends who joined him to take advantage of the marketing opportunity at the Democratic National Convention. Kim, 36, is residing in Korea as he does research on the country’s cuisine. Originally a liberal political-science student who went to Bowdoin College, he felt the same sting as many other Bernie Sanders supporters upon the release of the Democratic National Committee emails earlier this week. “I didn’t think that everyone who really wanted to voice their opinions was able to voice their opinions,” he said. 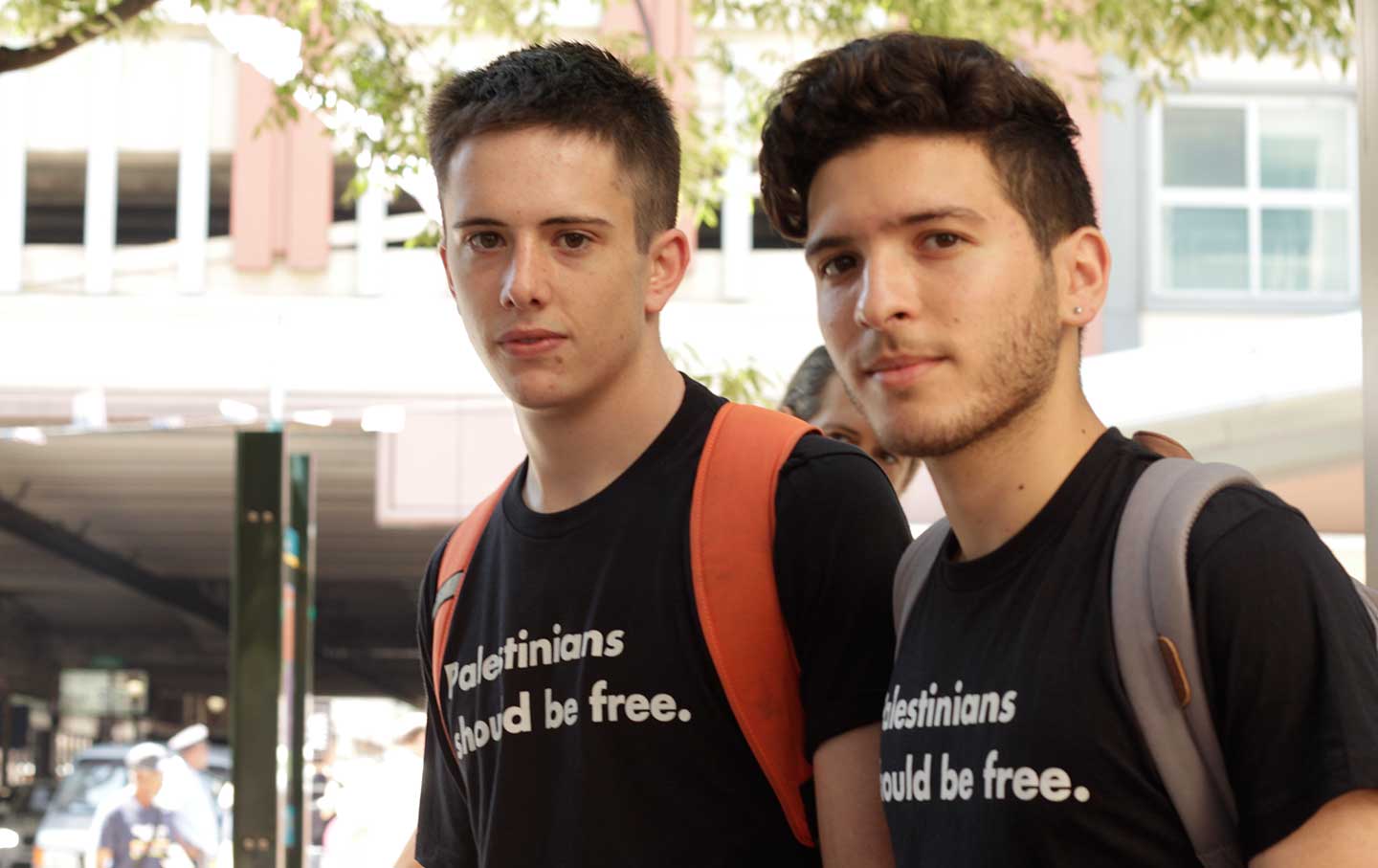 We stumbled upon Noah Mlyn, 20, and Noah Habeeb, 22, on their way to a pro–Palestinian rights protest organized by advocacy group Code Pink. Both Noahs are Jewish activists interning with Jewish Voice for Peace who came to the Democratic National Convention specifically to voice concern for the party’s lack of mention of the Israel-Palestine conflict. They both voiced support for Bernie Sanders, but stressed that voting is not enough to make a difference in this country. “Voting is great, but it’s insufficient in that change doesn’t happen during the electoral extravaganza every four years,” Habeeb said. 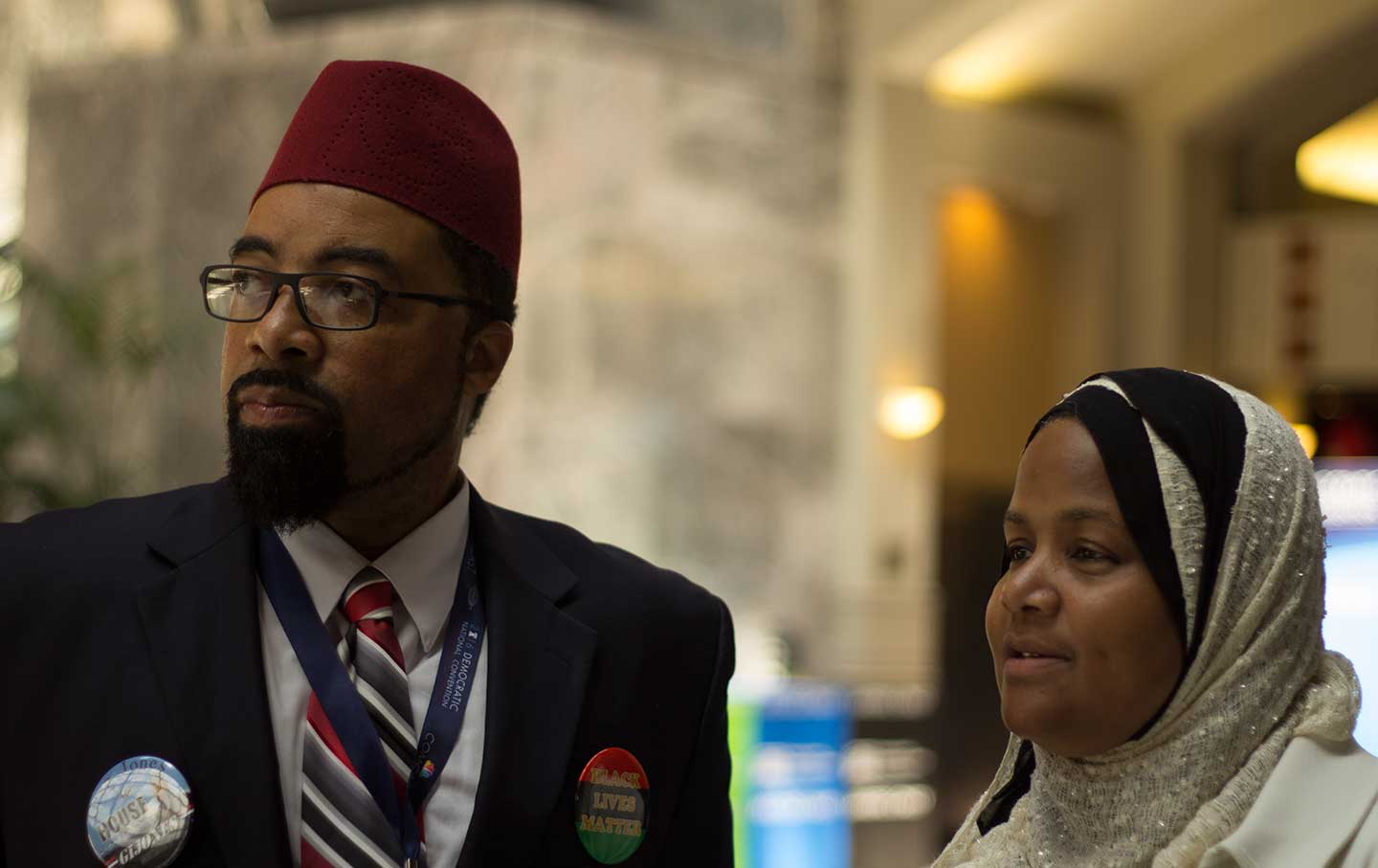 Maleika and Gregory I. Jones

Gregory I. Jones is a Bernie Sanders delegate from Alaska. His wife, Maleika, is joining him as he participates in his first convention. “I’m a grassroots person. I’m a 99 percenter. I want an aggressive agenda to address the income inequality in America,” he said. But even as a staunch Bernie Sanders advocate, Jones was quick to respect and adopt Sanders’s instructions to support now–Democratic nominee Hillary Clinton. Jones and his wife have raised eight children in their 32 years of marriage, and have been passing along the importance of remaining optimistic in the face of a challenging time. “Those millennials are our children,” Jones said. “They say the system is rigged and that votes don’t count, but we have to keep the faith and know these things are relevant and important.”