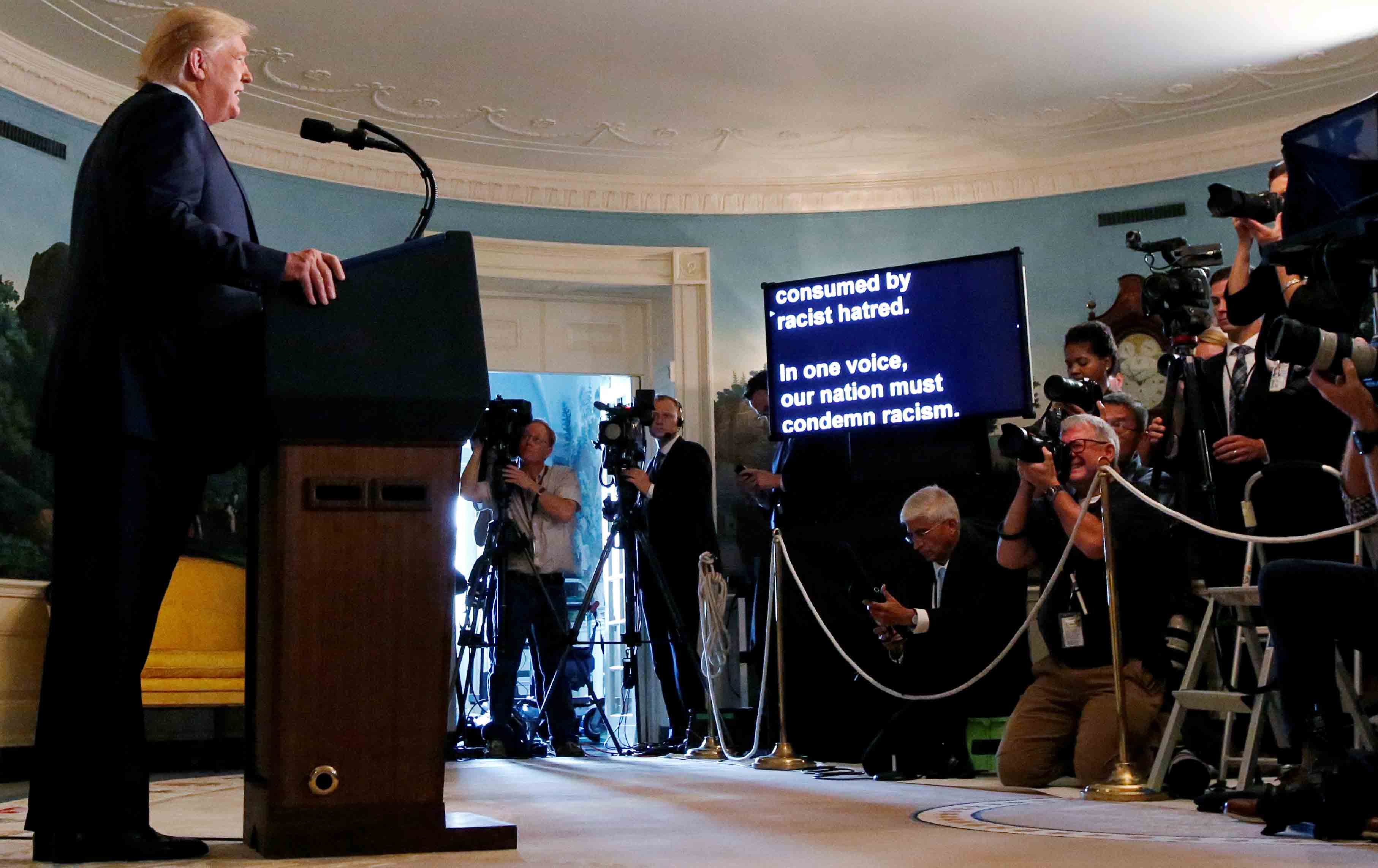 Donald Trump speaks about the shootings in El Paso and Dayton on August 5, 2019. (Reuters / Leah Millis)

Donald Trump is a vile demagogue whose racism and xenophobia have made the United States a dramatically more dangerous and threatening place. This is the uncomfortable reality that most Republicans would prefer not to discuss. On the Sunday morning after 22 men, women, and children in El Paso were killed by a white man who targeted Latinos and whose “manifesto” echoed Trump’s anti-immigrant hate speech, CNN’s Jake Tapper listed Republicans who had declined to to go on his State of the Union program to discuss the mass shooting in Texas—and another that killed nine people in Dayton, Ohio. CNN would later report that 49 of 50 Republican lawmakers declined to appear on air to discuss the shootings.

It is no wonder that Republicans do not want to defend their president. Trump’s response on Monday to a weekend of terroristic gun violence was so empty and disengaged that he concluded with a mention of mourning the violence in “Toledo,” not Dayton. The president griped about the Internet, video games, and mental illness. He rehashed wrongheaded arguments against gun control—with a line about how “mental illness and hatred pulls the trigger, not the gun.” (Hillary Clinton corrected the spin from the man she defeated by 2.9 million votes in 2016 with a tweet noting that “People suffer from mental illness in every other country on earth; people play video games in virtually every other country on earth. The difference is the guns.”)

Trump’s statement only briefly mentioned “racism, bigotry and white supremacy,” the subjects that should have been central to his remarks. He took no personal responsibility. He proposed no change in a pattern of behavior so extreme that a former congressman from El Paso, Beto O’Rourke, says: “He’s not tolerating racism, he’s promoting racism. He’s not tolerating violence, he’s inciting racism and violence in this country.”

O’Rourke’s observation was echoed by other Democrats who would like to replace not just Trump but Trumpism. “We are under attack from homegrown white nationalist terrorism,” announced South Bend, Indiana, Mayor Pete Buttigieg, who said, “That ideology is evil, it is being condoned at the highest levels of our government.” Massachusetts Senator Elizabeth Warren said, “We need to call out white nationalism for what it is—domestic terrorism. It is a threat to the United States, and we’ve seen its devastating toll this weekend. And we need to call out the president himself for advancing racism and white supremacy.” Bernie Sanders was even blunter: “We have a president who actively demonizes racial and religious minorities, who coddles Nazis and Klansmen, and who wields white supremacy as a political weapon.” 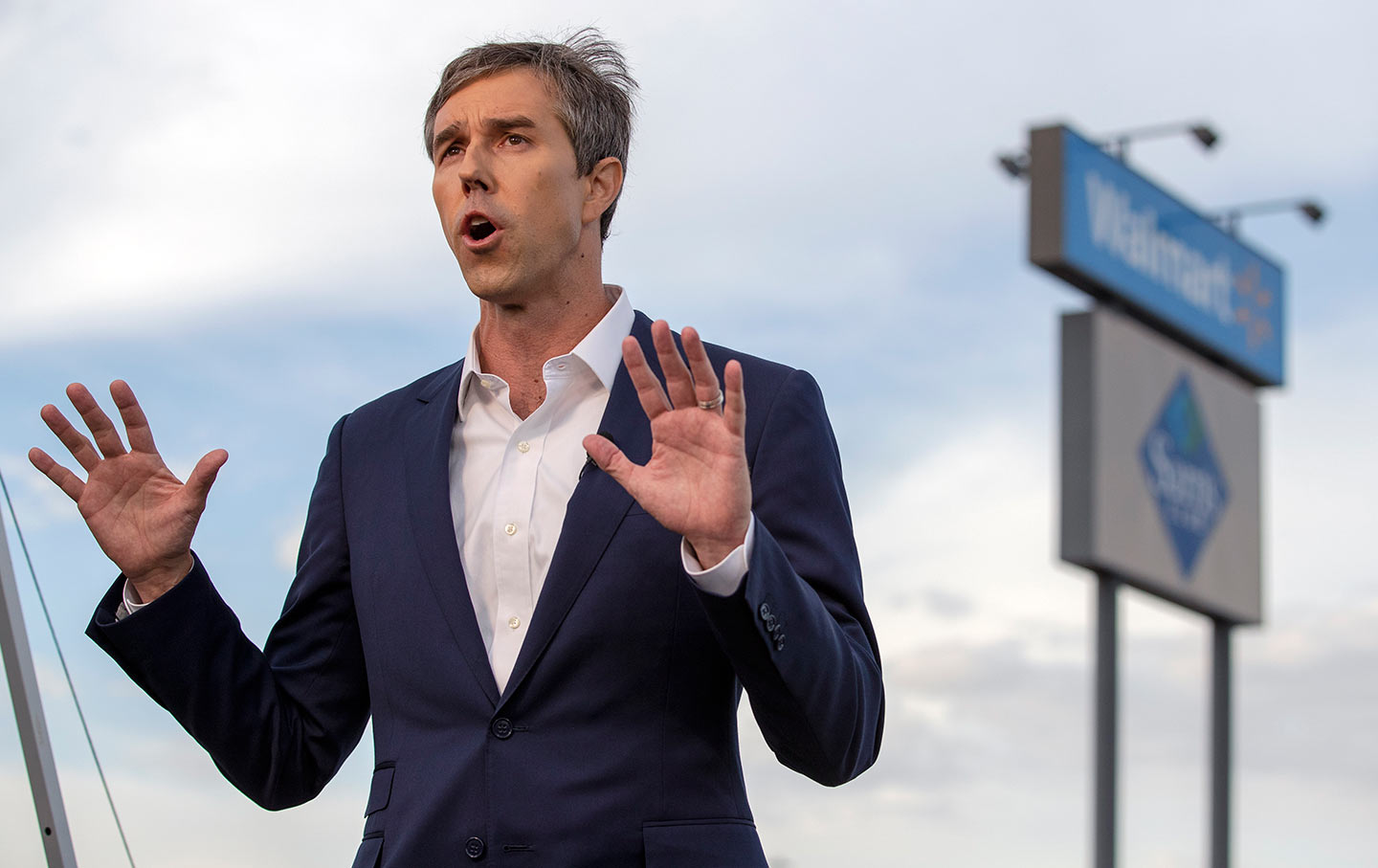 The Democratic responses have been poignant and powerful. But the responses that matter must, necessarily, be those of Republicans—who have a moral duty to call out a president from their own party. It is crude partisanship to presume that all Republicans agree with Trump. There are Republicans who know that this president’s provocations have been harmful. But they have muted their disagreement for reasons of an even cruder partisanship rooted in the fear of primary challenges, and of losing favor with party leaders who have become Trump’s enforcers.

“There was a time when the GOP establishment hated Donald Trump,” says Michigan Representative Justin Amash, a longtime Republican who has left the party out of disgust with Trump. “They then realized they could use a man like this—unprincipled, transactional, shameless—to push their agenda,” argues Amash. “[Senate Republican majority leader Mitch] McConnell and [House Republican minority leader Kevin] McCarthy are giddy about Trump. Conservatives in Congress are the ones privately horrified.”

Those who are “privately horrified” must now become publicly outspoken. As Trump sweeps away the last remnants of the “Party of Lincoln” and forges a party organized around overt racism and white supremacy, the country is at a critical juncture. Republicans who consider themselves “honorable” cannot have it both ways. If they do not condemn Trump and Trumpism, they are complicit with its foulest manifestations. Some commentators are saying as much; for instance, former Republican representative Joe Scarborough argued on his MSNBC show Monday that “The president never tones down his rhetoric. In fact, for those of you who are funding Donald Trump’s reelection campaign you may want to take note that because you keep writing checks to this president it’s on you, it really is, because you are funding this white supremacist campaign.”

It is on them to make the break with Trump and Trumpism. And it is on the media to report on those Republicans who speak up, as well as those who let their silence speak for them.

Is it too much to ask that Republicans get on the right side of history? No. It is the bare minimum to be asked. This is a “Declaration of Conscience” moment—not unlike the one in 1950 when Maine Republican Senator Margaret Chase Smith ripped into Wisconsin Republican Senator Joe McCarthy for his divisive and destructive “red scare” politics.

“We have a Republican president who continually stokes racist fears in his base. He calls certain countries ‘sh*tholes,’ tells women of color to ‘go back’ to where they came from and lies more than he tells the truth,” explained McCollister. But he did not stop there; he pointed the finger of blame at members of his party who serve in Congress, saying (via Twitter), “We have Republican senators and representatives who look the other way and say nothing for fear that it will negatively affect their elections.” This, the Nebraska Republican explained, means that “the Republican Party is COMPLICIT to obvious racist and immoral activity inside our party.”

McCollister, who has deep roots in the state’s party as the 72-year-old son of a former Republican congressman and US Senate candidate, concluded in the only way that an honest conservative or an honorable Republican could. “No more. When the history books are written, I refuse to be someone who said nothing,” he wrote. “We all like to cite Abraham Lincoln’s Republican lineage when it is politically expedient but NOW is the time to ACT like Lincoln and take a stand.”

Actually, the time came long ago. It is just that, now, the need to speak up is so urgent that it cannot be denied. This is the existential moment in the long history of the Grand Old Party in which it will be decided whether a party that long ago abandoned the best of its Lincolnism has now been fully and permanently Trumped.