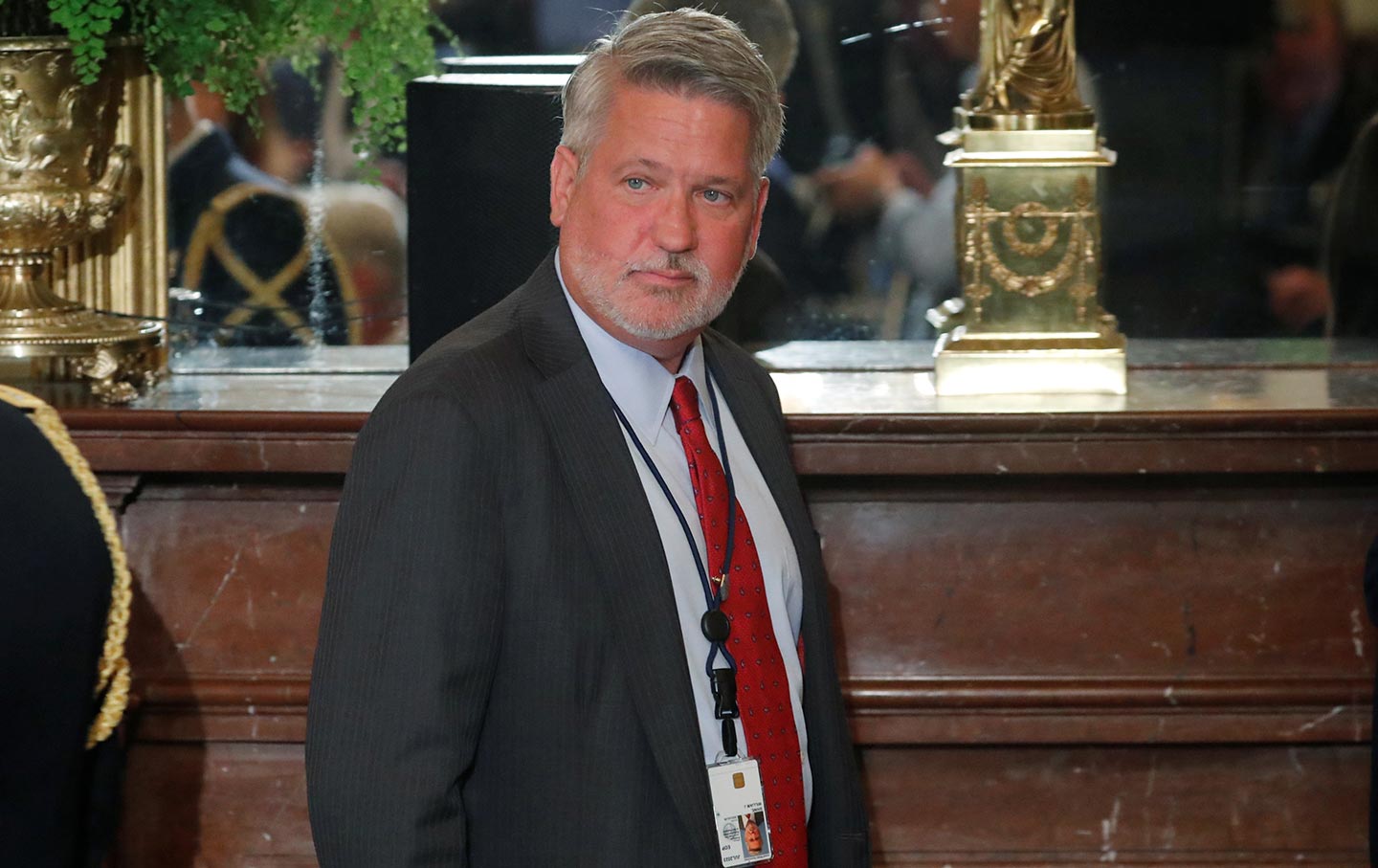 Donald Trump’s war on the media is so unrelenting it can be hard to single out a “worst” development at any given time. It’s been just over a month since a man with a grudge against a reporter shot five journalists in Annapolis, and the president refused the mayor’s request to fly the White House flag at half-mast (he eventually relented). A week later, Trump proclaimed reporters “bad people” at a rally only 30 miles away from the murders. Just last night, wrathful crowds chanting “fake news” and “CNN sucks” harassed the network’s Jim Acosta at Trump’s Tampa rally. The video is genuinely scary. For one thing, it showed that the sick and dangerous QAnon conspiracy theory—which holds that Democrats, Hollywood celebrities, and the “deep state” are collaborating in child-sex-trafficking and are trying to assassinate Trump for his role in exposing it—has gotten traction in the Trump base.

Against that backdrop of violence, real and threatened, the administration’s latest assault on media rights has been all but forgotten. It’s been exactly a week since Trump’s new communications director, former Fox News co-president (and Roger Ailes enabler) Bill Shine banned CNN’s Kaitlan Collins from a Rose Garden press availability with the president, as punishment for doing her job. Designated the network pool reporter, Collins shouted questions at Trump as he held a photo opportunity—questions that appeared to irritate the president, since they referenced breaking news that his former lawyer, Michael Cohen, had taped some of their conversations and released one that clearly featured Trump talking about paying to suppress the story of his affair with a Playboy model.

Collins’s ban became big news at the time and spurred solidarity from other networks, including Shine’s former employer Fox News, whose reporters likewise protested Collins’s punishment. The truth is that White House journalists, most of them men, routinely call out questions to Trump at his public appearances, a necessary practice since Trump has only held one formal press conference in the United States. And he often answers. In 18 months, only one reporter has been disciplined for it, and she happens to be a young woman, bullied by Shine (backed up by Sarah Huckabee Sanders, of course) during his first weeks on the job. There was a brief backlash, but a week later Shine’s goon move has largely been forgotten.

That’s not nearly as puzzling, though, as the fact that Shine’s hiring itself provoked no backlash—even though he lost his job for his alleged role in enabling and covering up Ailes’s sexual harassment of female journalists at the conservative network. Maybe it’s outrage fatigue. Maybe Trump himself is such a monster that hiring someone like Shine barely registers as big news. But as Michael Tomasky noted in The Daily Beast this week, Shine was named in multiple lawsuits for his role in covering up, if not abetting, Ailes’s serial abuse. He was also a stalwart defender of disgraced former Fox host Bill O’Reilly, likewise accused of paying off multiple women for their silence about his sexual behavior. The best Shine’s defenders could do was this from former Fox News anchor Greta van Susteren, a Shine admirer: “He was never accused himself of sexual harassment. He was only accused of looking the other way.” (Note to former co-workers: If that’s the best you could do to defend me in some future controversy, please just pass.)

The New York Times also reported that Shine was questioned before a federal grand jury by prosecutors conducting a criminal investigation into Fox’s alleged cover-up of Ailes’s crimes—an investigation begun by former US Attorney Preet Bharara that seems to be going nowhere since Bharara was fired by Trump last year. (The National Memo’s Joe Conason notes that the probe seems to have stalled since Trump appointed Geoffrey Berman as the new US Attorney for the Southern District.) As Tomasky asks, how did Shine obtain the security clearance he needs as an assistant to the president given his involvement in the federally investigated Fox mess? And what did he say to the grand jury? He could release his testimony, and as a public servant, he ought to, but it seems no one has publicly asked him to.

Honestly, in this #MeToo moment, which I fervently hope is a movement, how did this man so close to Ailes’s sexual abuses get a taxpayer-funded job working for Trump—a man credibly accused of sexual harassment by at least 19 women—without more outcry? Democrats, as well as the media, have been weirdly mute about Shine’s new role. Especially after his crude attack on Collins, you’d think more journalists would be asking questions. Maybe they are. I hope we’ll learn the answers soon.

But as we get riled up about the abuse of journalists at Trump’s latest rally, we should remember the henchman the president put in charge of his “communications” with us. Shine has shown contempt for women, for reporters and for the truth. He is now a leader of what media critic Jay Rosen calls Trump’s “hate movement against journalists.” As the old adage goes, “know your enemies.” Reporters need to get to know Shine much better as this hate movement he helps lead metastasizes.