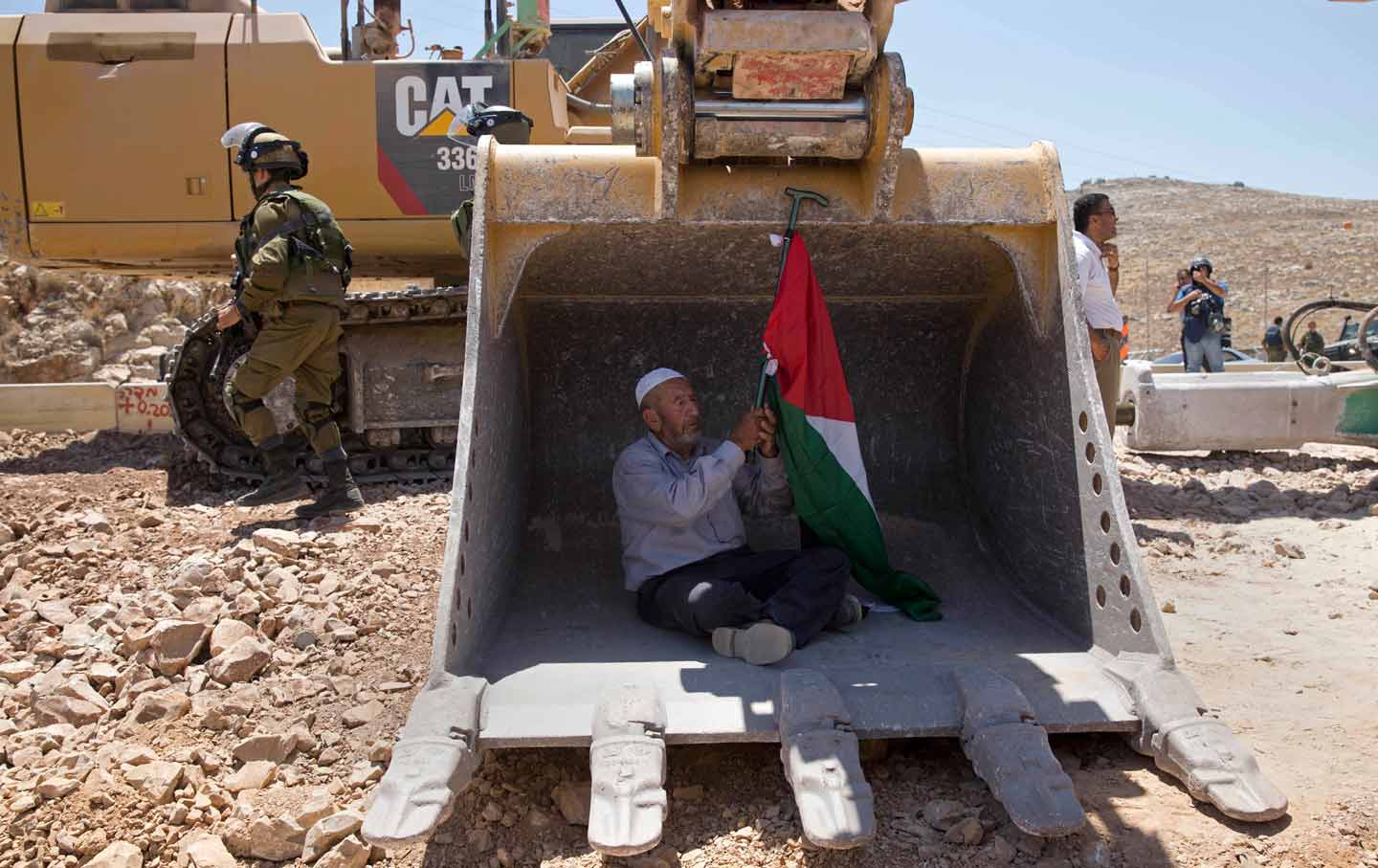 A Palestinian man tries to stop an Israeli bulldozer during a protest against the expansion of a Jewish settlement, Deir Qaddi, West Bank, Palestine, July 13, 2016. (AP Photos / Majdi Mohammed)

But in fact, that decision has already been made by the Israeli public and is consistently reflected by the policies of its elected leaders. The settlement population has doubled over the past 20 years and now stands at between 550,000 and 600,000; there are more settlers in positions of power than in any other time in Israeli history; the current Netanyahu coalition is explicitly and implicitly against a two-state solution and a significant portion of its members openly advocate annexation of 60 percent of the West Bank; fewer and fewer Israelis polled say they support a Palestinian state or see any need for a two-state solution.

Outwardly, the message is no different: Netanyahu’s ambassador to the UN, Danny Danon, is vehemently against the creation of a Palestinian state, having openly called for a Greater Israel from the Jordan River to the sea. And Netanyahu’s consul general in New York, Dani Dayan, is a former leader of the settlement movement who has claimed that settlers are an “irreversible fact.” Just this week, Israel’s foreign ministry—headed by Netanyahu—put out a video whose sole purpose is to try to exhibit historically that Palestinians never existed in the Land of Israel, that they are foreigners in this place, thereby delegitimizing any claims they have to national self-determination.

Israel has thus managed to continue its settlement and occupation enterprise while simultaneously preserving its lip service to the possibility a two-state solution—and has not had to face any consequences for doing so. As a result, Israel, the dominant, occupying power, has continued to act with impunity. It has continued to present itself as the sole seeker of peace and sole victim of violence while continuing to create facts on the ground that not only contradict the principles of a two-state solution, but also violate international law and the basic human rights of Palestinians in the here and now. The fact that the Palestinian Authority is a shambles and the split between Hamas and Fatah is only growing makes Israel’s argument that there is no partner even easier to make. So this duality or contradiction between pursuing settlements and pursuing a two-state solution is not an accurate or useful one, and it is about time the State Department dropped it and changed its approach.

The major question the US administration must ask itself—and specifically Obama, if he is to do anything before leaving the White House—is what kind of Israeli action would indicate that it has made the decision to choose settlements over a viable solution? If the contingency plan for Amona is “another step towards cementing a one-state reality of perpetual occupation that is fundamentally inconsistent with Israel’s future as a Jewish and democratic state,” as Toner stated, then what would be the final step? Where is that red line? Is it the final and total expulsion of Palestinians from the tiny village of Susya in Area C in the southern West Bank? Is it the establishment of a certain number of new housing units in isolated settlements? Is it the election of Naftali Bennett as prime minister? If Obama could explicitly define that red line and outline the consequences Israel would have to face for crossing it, that would already be an enormous step in the right direction. Without such a marker, US foreign policy on this question is derelict and meaningless.

Many policy people, both Israelis and Americans, make the argument that any pressure on Israel will only move it further to the right. This may be true. But no pressure at all under eight years of Obama has already moved Israel further to the right than it has ever been.

On a deeper level, it is important to understand that the notion espoused by the US government that settlements are somehow separate, external, or foreign to the Israeli body politic and its regime is archaic and naive. The industry of occupation—of which settlements are only one part—is an integral and inseparable part of Israeli society, its system of government, its economy, its culture, etc. Since June 5, 1967, the land between the Jordan River and the Mediterranean Sea has been ruled by one regime, one state apparatus with two distinct governing practices, one for Jews and one for Palestinians. That doesn’t necessarily mean a two-state solution is no longer viable or desirable. But it does mean that in reality, Israelis have made their choice. So the question is whether the United States can face that reality, and what, if anything, is it prepared to do about it?