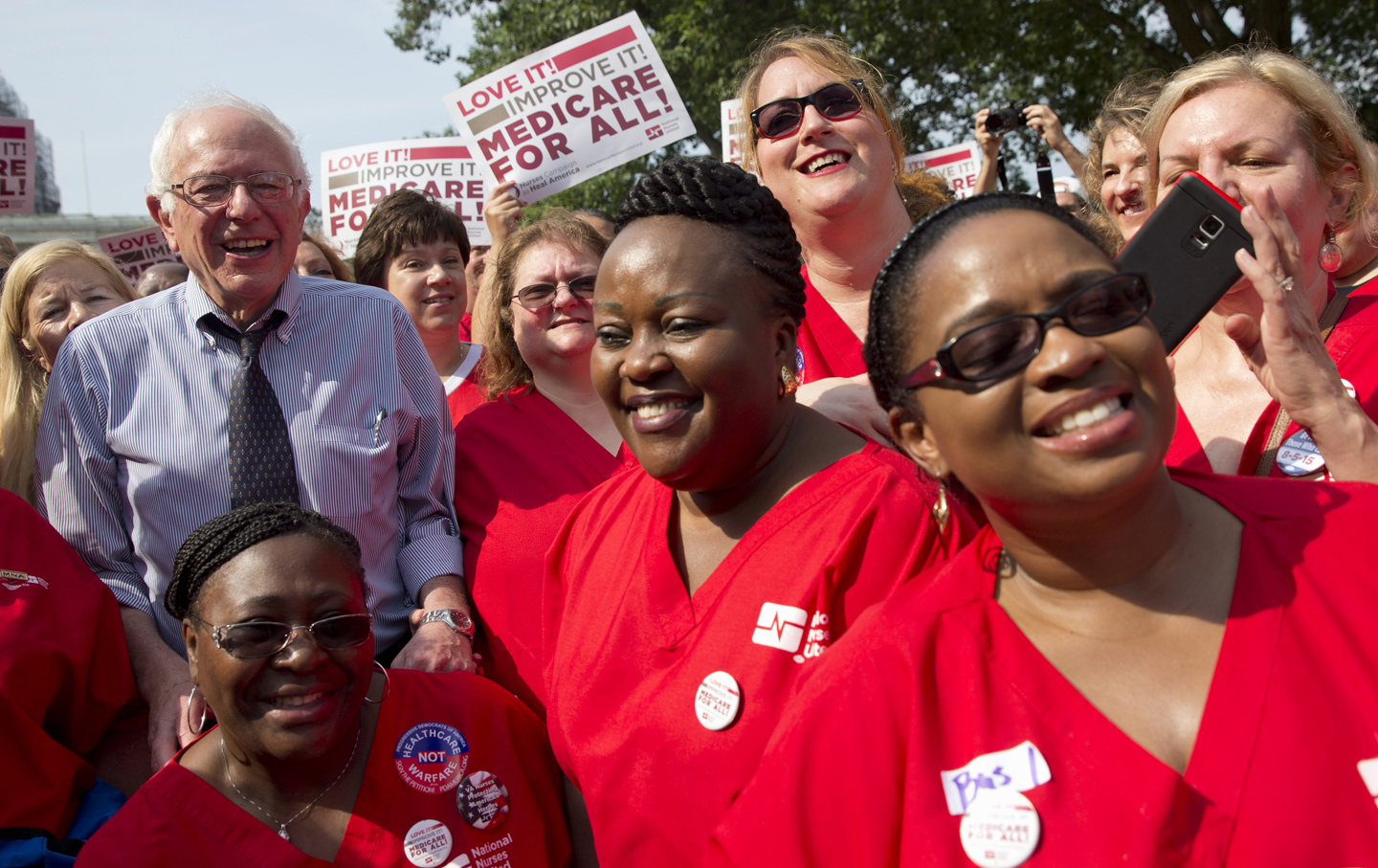 Democratic presidential candidate Senator Bernie Sanders, left, poses with a group of nurses after speaking at a rally on the 50th anniversary of Medicare and Medicaid on Capitol Hill. (AP Photo/Jacquelyn Martin)

This week, The Wall Street Journal dropped a terrifyingly large number on Senator Bernie Sanders’s upstart campaign, warning that his proposals would carry a “price tag” of $18 trillion over a 10-year period. It’s a number designed to shock and awe and discourage voters from giving the social democrat’s ideas a close look.

But according to the very data cited by The Journal’s Laura Meckler, Sanders’s highly progressive proposals wouldn’t cost the United States a single penny, on net, over that 10-year window. In fact, they’d cost less, overall, than what we’d spend without them.

It’s not hard to understand why. The lion’s share of the “cost”—$15 trillion—would pay for opening up Medicare to Americans of all ages. (Meckler notes that Sanders hasn’t released a detailed proposal, so she relies on an analysis of HR 676, Representative John Conyers’s Medicare-for-all bill.)

Rather than cost us more as a society, this proposal would only shift spending from businesses and households to the federal government by replacing our current patchwork system of public and private insurance with a single, more efficient system of financing.

But it wouldn’t be a dollar-for-dollar transfer from the private to the public sector. According to Gerald Friedman, an economist at the University of Massachusetts at Amherst who authored the analysis cited by the Journal, that transition would reduce American healthcare costs by almost $10 trillion over 10 years through economies of scale, better control of pharmaceutical costs, and savings on administrative bloat.

Friedman also projects that, as every American got coverage, we’d spend close to $5 trillion more on actual healthcare services. So we would get more healthcare and still end up saving around $5 trillion on net. In other words, Sanders’s Medicare expansion would cost $15 trillion, but without it American businesses and taxpayers would spend $20 trillion over the same period, while still leaving millions uninsured.

This shows just how badly we get ripped off under our current system. And as Friedman writes at the Huffington Post, “The economic benefits from Senator Sander’s [sic] proposal would be even greater than these static estimates,” because they don’t factor in “the productivity boost coming from a more efficient health care system and a healthier population.”

So let’s look at the rest of the Journal’s terrifyingly socialist buffet of policies:

As you can see, the $5 trillion we’d save on healthcare costs would more than cover the costs of the rest of Sanders’s agenda—offering tuition-free education at public colleges, expanding Social Security benefits, bolstering private pensions, repairing some of our aging infrastructure and establishing a fund to help cover paid family leave. That doesn’t seem so frightening after all.

If the study cited by the Journal is correct, all of those benefits would not only effectively cost us nothing, we’d still have $2 trillion left over to, say, cut federal deficits for the next ten years—something that should warm the hearts of fiscally conservative Wall Street Journal readers.

But the real challenge Sanders’s proposals present for the Wall Street Journal crowd is ideological. In America, our taxes are quite low relative to other advanced countries, but we shell out dramatically more out-of-pocket for social goods like healthcare, education, and retirement. In fact, in 2009 (before Obamacare’s subsidies and Medicaid expansion kicked in), Americans spent almost four times as much as the citizens of other wealthy countries buying social goods on the private market. As a result, while we know that a big chunk of our paychecks are going to Uncle Sam, we don’t see the same kind of benefits coming back to us as people in the rest of the developed world do. And that disparity makes Americans receptive to the right’s anti-government rhetoric.

So this isn’t really about costs, because the government is more efficient than private enterprise in providing social insurance and higher education. If, in some alternate universe, Bernie Sanders were able to win the presidency and enact his proposals in their entirety, it would pose an existential threat to the conservative project to convince Americans that their tax dollars don’t buy much—that government is all about bloat and corruption and giving their hard-earned dollars to the undeserving poor.

Seen in that light, it’s no surprise that The Wall Street Journal would drop this kind of bunker-busting number-bomb on the gentleman from Vermont.