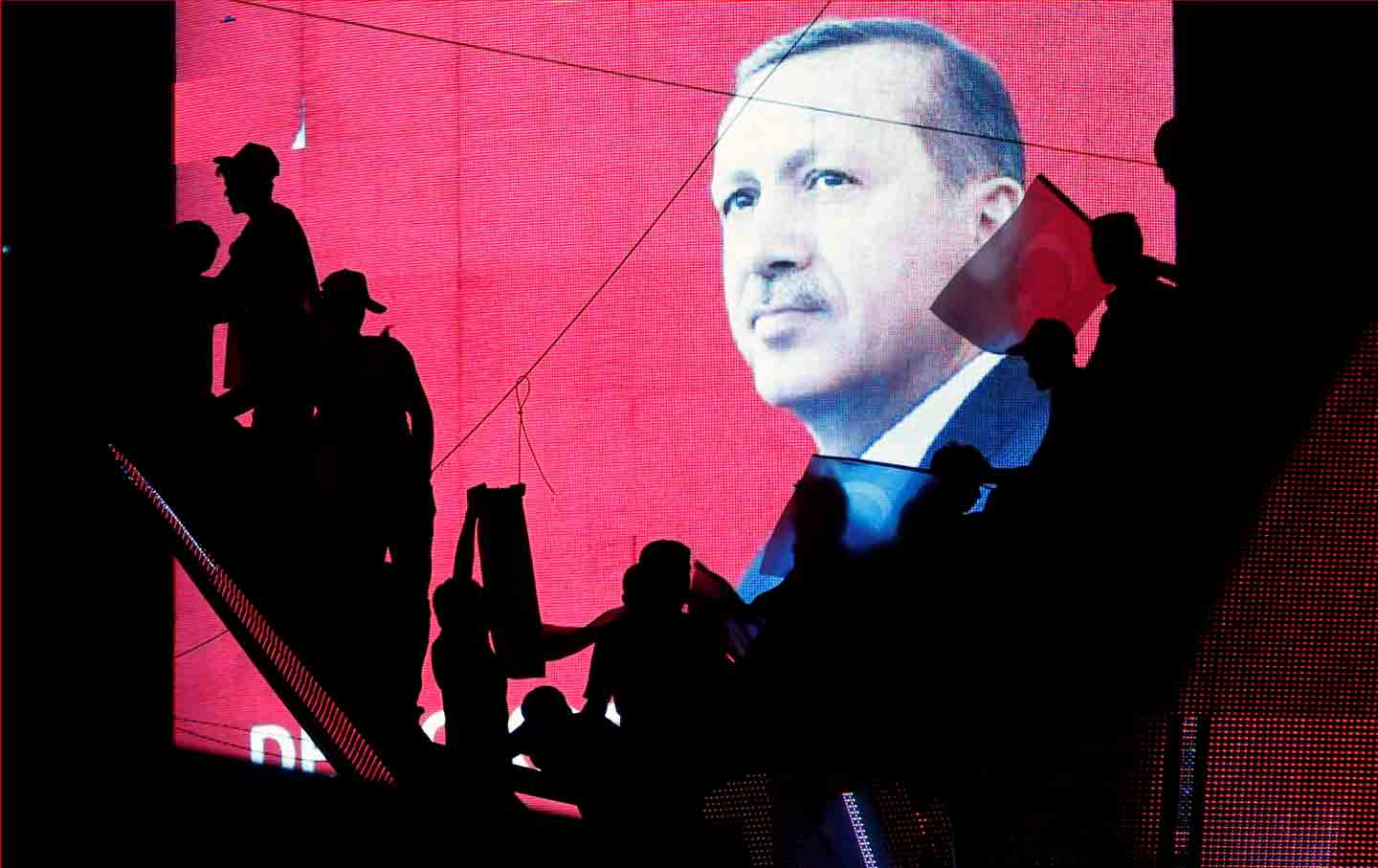 Turkish Supporters are silhouetted against a screen showing President Tayyip Erdogan during a pro-government demonstration in Ankara, Turkey, on July 17, 2016. (Reuters / Baz Ratner)

Even before the attempted July 15 coup in Turkey, there were severe strains between the government of President Tayyip Erdoğan and his NATO allies. From a European and North American point of view, the central challenge in the Fertile Crescent is Muslim extremism as exemplified in the rump “state” of ISIL and its terrorist attacks abroad. Turkey under the pro-Muslim Justice and Development Party (AKP) insisted instead on going its own way, obsessed with internal conspiracies, with overthrowing the Syrian government even if it meant arming and funding hard line fundamentalists, with annihilating the small PKK-Kurdish guerrilla movement, and with increasingly authoritarian control of domestic media and politics. In the aftermath of the failed putsch, Turkey-US relations are likely to reach a new low.

Appalled at the mass arrests or firings since Saturday of tens of thousands of judges, educators, bureaucrats, police, and military men, along with some apparent reprisal killings, Secretary of State John Kerry reminded Erdoğan that democracy and due process are requirements for NATO member states. Although most of those targeted probably had been under surveillance on suspicion of being lukewarm toward Erdoğan, all of them (they include 15,000 school teachers and 1,500 university deans) were a little unlikely to have been involved with the coup. Kerry was hinting that if the vengeful president went too far in disregarding the right of people to habeas corpus and fair trials, his country might be ejected from the treaty organization.

NATO was already annoyed with Turkey for recklessly shooting down a Russian bomber last fall, the pilots of which had been striking Al Qaeda–allied Turkish proxy guerrillas in northern Syria. Erdoğan seemed to expect NATO to support him if hostilities broke out between his country and Moscow, but he was firmly informed that he was on his own in that case. Turkey’s lukewarm attitude toward the need to roll up ISIL has been another source of friction.

For their part, AKP officials including Erdoğan and his prime minister, Binali Yildirim, demanded that the United States immediately extradite from Pennsylvania to Turkey the elderly Turkish cult leader Fethullah Gülen, head of the Hizmet or “service” movement with which perhaps 10 percent of Turks have some level of involvement. Erdoğan believes that Gülen has a secret Stalinist-style network of operatives who over the years have infiltrated the judiciary, police, and army in preparation for the staging of this coup. The Gülen true believers, a right-wing neo-Sufi group with a strong international presence, had been part of Erdoğan’s coalition before falling out with him in 2013. The US request for evidence of Gülen’s involvement of the coup infuriated AKP officials, who appear to think the United States can just set aside due process at the drop of a hat, the way it is done by Erdoğan in Turkey. Gülen emigrated to the United States in 1999, allegedly for a health treatment, but he was in any case under a cloud in then-secular Turkey because of accusations he was plotting to implement an Iran-style Islamic Republic there.

Erdoğan’s minister of Labor Suleyman Soylu openly accused Washington of being behind the coup attempt. Some think he represents the thinking of Erdoğan himself, to whom he is close. It is extraordinary that high cabinet official of a NATO member state should launch such charges publicly against the United States. The deputy chairman of the AKP, Yasin Aktay, said that it appeared that Washington was actively backing the coup-makers. The United States is accused by some Turks of not having stopped a coup-involved refueling plane from taking off Friday from Incirlik Air Force base, which is leased to it. Pro-AKP Turks are also suspicious that the US administration seemed to wait many hours before expressing support for the government against the coup-makers.

In the years before this crisis, Turkey under Erdoğan had begun to act less like an ally and more like a grocer in a famine, determined to drive the hardest bargain possible with its desperate customers. Last summer Erdoğan agreed to let the United States bomb ISIL from the Incirlik Air Force base, and committed Turkey to join in the bombing campaign on the phony caliphate in Raqqa. Instead, Erdoğan took advantage of his air force’s presence in the skies over Syria and Iraq to bomb PKK Kurdish hideouts, paying little attention to ISIL. The PKK is a far-left and fairly brutal secessionist movement, which appears to have the support of only about 2 percent of Turkey’s Kurds, who form some 20 percent of the population. Given Turkey’s lack of interest in rolling up ISIL, the US Department of Defense has turned instead to Syria’s own leftist Kurds, the YPG, who have proved the best fighting force in Syria against ISIL. The United States has embedded 200 troops among these anarchist leftist feminists and has organized them into the Syrian Democratic Forces, to which it gives air support. Turkey considers the YPG a branch of the PKK and therefore a terrorist organization that threatens the security and territorial integrity of southeastern Turkey. Secretary of Defense Ashton Carter appears to have told Ankara to jump in a lake when it complained.

Last December Erdoğan extracted massive aid from the European Union, and demanded visa-free travel in the EU for Turkish citizens in return for a pledge to make it harder for refugees and migrants to slip into Europe from Turkey. (That is, he blackmailed Brussels with the threat of simply not doing what a state does, which is to control its borders.)

In the present circumstances, Gülen’s continued presence in the United States will continue to be a strong irritant in US-Turkish relations, and whether Turkey’s lawyers can make a convincing extradition case to the US courts is unclear. Erdoğan’s obsession with the Kurdish threat also promises frictions over the apparent US support for a Kurdish mini-state (“Rojava”) in northern Syria that at most might form a province of a reunited, federal Syria in the future. US acquiescence in the Rojava project appears to be a quid pro quo for Syrian Kurdish help in rolling up ISIL in that country, given that Erdoğan has proven entirely uninterested so far in effectively attacking al-Raqqa (though it probably is not true that, as his critics charge, he is actively in league with the phony caliphate).

Turkey’s usefulness to the 28-member NATO is in providing it with its largest army, in contributing to order in the eastern Mediterranean, and in defeating extremism in the area. The hope was that Turkey might move toward democracy and become more integrated into, if not actually join, the European Union. If instead the Turkish government is about fighting a dirty war with Kurds, ignoring ISIL, pursuing a covert war in Syria that promotes radicalism and a steady refugee stream to Europe through unguarded borders, and overthrowing the rule of law, due process, press freedom, and civil liberties at home, Kerry is right that NATO will have to take another long, hard look at its relationship with Ankara. Still, it should be remembered that Turkey remained a NATO member while under direct military rule in the 1980s, when there were massive violations of civil rights and the union movement was virtually destroyed. Washington, Brussels, and Ankara likely need each other too much to divorce, even if they are increasingly trapped in a bad marriage.