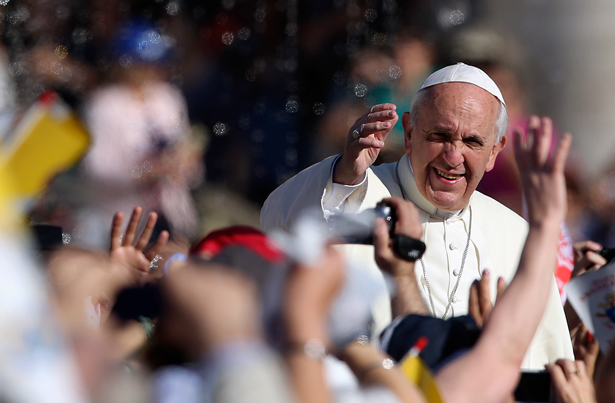 Forget, for the moment, that he is the pope, and that Holy Father Francis’ apostolic exhortation last week was addressed “to the bishops, clergy, consecrated persons and the lay faithful.” Even if, like me, you don’t fall into one of those categories and also take issue with the Catholic Church’s teachings on a number of contested social issues, it is difficult to deny the inherent wisdom and clarity of the pontiff’s critique of the modern capitalist economy. No one else has put it as powerfully and succinctly.

It is an appraisal based not on “just pure Marxism coming out of the mouth of the pope,” as Rush Limbaugh sneered, but rather the words of Jesus telling the tale of the Good Samaritan found in Luke, not in Das Kapital. As opposed to Karl Marx’s emphasis on the growing misery of a much-needed but exploited working class, Francis condemns today’s economy of “exclusion” leaving the “other” as the roadkill of modern capitalism:

Today everything comes under the laws of competition and the survival of the fittest, where the powerful feed upon the powerless. As a consequence, masses of people find themselves excluded and marginalized: without work, without possibilities, without any means of escape.

It is a message that applies to disrupted worldwide markets in which massive unemployment is now common, as well as to the underemployed and working poor who are the new “normal” even in still wealthy America. They make up the bulk of those ejected from a once largely unionized industrial workforce, who are now left to compete for low-paying Walmart-style jobs that require government handouts to avoid the extremes of poverty. They are the victims of what the pope refers to as “trickle-down theories which assume that economic growth, encouraged by a free market, will inevitably succeed in bringing about greater justice and inclusiveness in the world.” It doesn’t, and instead “a globalization of indifference has developed.”

That is an obvious truth, whether divinely inspired or not. So too is Francis’ excoriation of “the new idolatry of money,” although here one can find evidence in Scripture that this idolatry is not so new given the description in Matthew 21:12 when Jesus “overthrew the tables of the moneychangers in the temple. But the pope is clearly right when he links our recent economic crisis to the modern worship of the gods of finance capitalism:

One cause of this situation is found in our relationship with money, since we calmly accept its dominion over ourselves and our societies.… The worship of the ancient golden calf has returned in a new and ruthless guise in the idolatry of money and the dictatorship of an impersonal economy lacking a truly human purpose. The worldwide crisis affecting finance and the economy lays bare their imbalances and, above all, their lack of real concern for human beings.…

This is a pope who in his native Argentina bothered to witness and tend to the needs of those who suffered most, and he comes to us now as a singular voice to remind us of the Occupy movement, which mostly secular liberal mayors in US cities brutally silenced to suit the convenience of the super-rich who own our politics. The pontiff writes:

While the earnings of a minority are growing exponentially, so too is the gap separating the majority from the prosperity enjoyed by those happy few. This imbalance is the result of ideologies, which defend the absolute autonomy of the marketplace and financial speculation.… A new tyranny is thus born.… The thirst for power and possessions know no limits. In this system, which tends to devour everything which stands in the way of increased profits, whatever is fragile, like the environment, is defenseless before the interests of a deified market, which become the only rule.

The deification of the market rests on denying that ethical considerations trump the goal of profit maximization. The market itself becomes the higher power, no matter the consequence for the exploited, the poor and the defenseless. “Behind this attitude,” Francis writes, “lurks a rejection of ethics and a rejection of God.” That is because ethics inevitably represents a judgment that “makes money and power relative.”

Finally there is a stern warning by this leader of a church with many followers in economically desperate areas that a status quo based on the extremes of exploitation contains the seeds of its own destruction. “No to the inequality that spawns violence,” the pope writes with words that apply to the poverty ghettos of the most affluent nations, words that echo those used by the Rev. Martin Luther King in organizing anti-poverty marches at the time of his assassination.

“The poor and the poorer peoples are accused of violence,” Francis warns, “yet without equal opportunities the different forms of aggression and conflict will find a fertile terrain for growth and eventually explode. When a society—whether local, national, or global—is willing to leave a part of itself on the fringes, no political programs or resources spent on law enforcement or surveillance systems can indefinitely guarantee tranquility.” Amen.