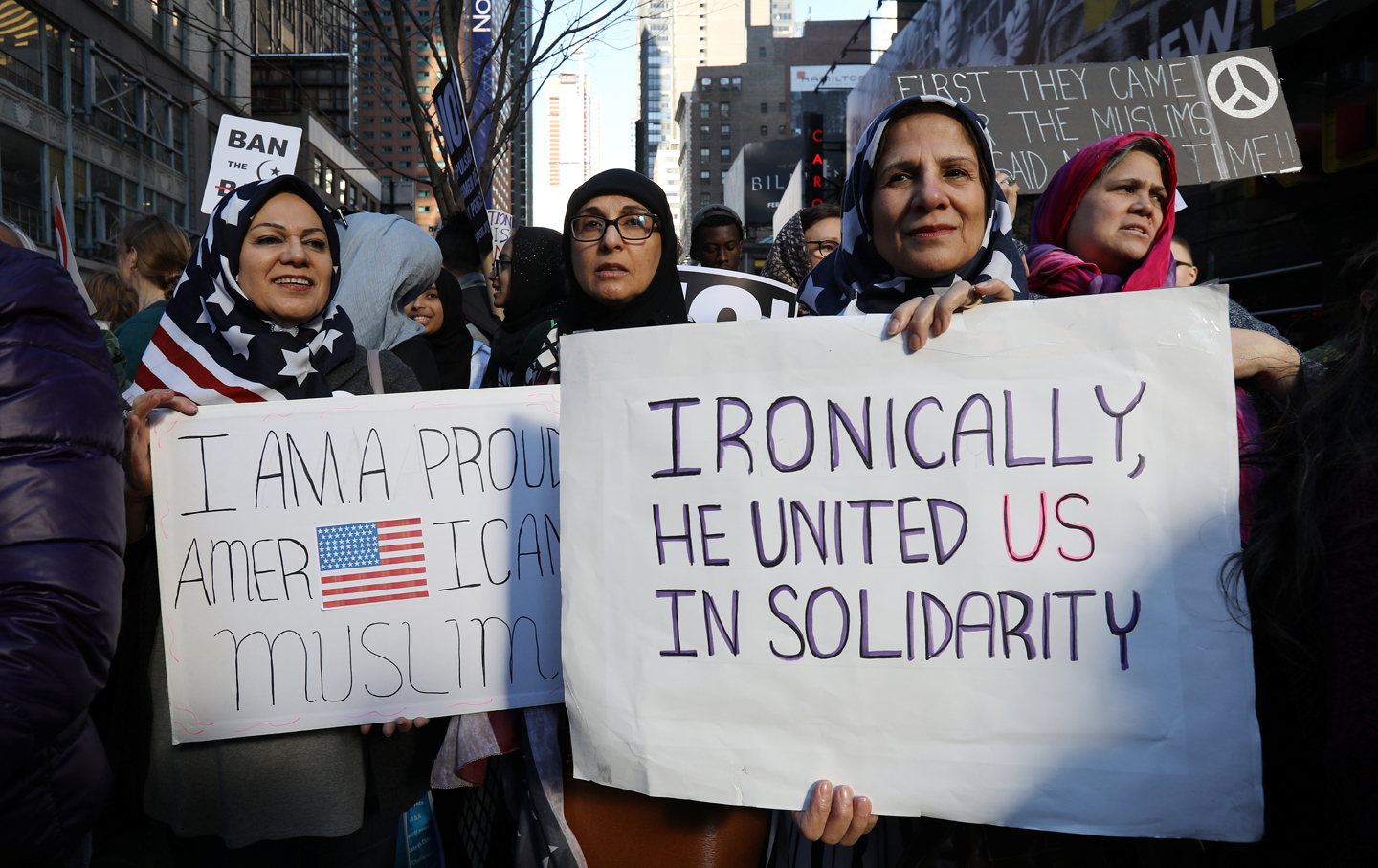 Women wearing American flag hijabs are pictured during an "I am Muslim Too" rally in Times Square, February 19, 2017. (Reuters / Carlo Allegri)

In one of his first official acts upon taking office, President Trump designated the day of his inauguration a “National Day of Patriotic Devotion.” While it’s not unusual for incoming presidents to issue symbolic proclamations, Trump’s choice of words reflected the extreme nationalism of a White House that, according to reports, wanted to stage an inaugural parade with military tanks rolling down the streets of Washington, DC. “A new national pride stirs the American soul and inspires the American heart,” he proclaimed.

However, nationalism should not be confused with patriotism. So nearly six months into Trump’s presidency, it seems especially fitting on this Fourth of July to reflect on the meaning of patriotism, and to consider how one can be patriotic during such deeply troubling times for the country.

A version of this column will appear at the WashingtonPost.com.

Throughout our history, American patriotism has too commonly been associated with enthusiastic praise for the military and uncritical support for war, along with a visceral belief in America’s “greatness” that provided the rhetorical foundation for Trump’s campaign. Especially in times of conflict—from the Spanish-American War to Vietnam to Iraq and Afghanistan—those who dare to dissent have frequently met with public scorn and shouts of disloyalty. Protest, too often, has been deemed unpatriotic.

But there is also a different view that defines patriotism as working to make sure the country lives up to its highest ideals. This is the view that inspired The Nation magazine, which has amplified dissenting voices and alternative views ever since its founding by abolitionists, to publish a special issue on patriotism for its 125th anniversary in July 1991. As the dust was settling on the first Gulf War, dozens of progressive writers, activists, scholars, and leaders shared personal reflections on the topic, many of which feel particularly relevant today.

The Rev. Jesse L. Jackson, for example, linked patriotism to the fight against oppression. “America at its best guarantees opportunity,” he argued, “and so fighting to expand the horizons of oppressed people is an act of patriotism.” Noting that real patriotism is not always popular, especially among the elite, he wrote that “true patriots invariably disturb the comfortable and comfort the disturbed, and are persecuted in their lifetimes even as their accomplishments are applauded after their deaths.” And he made it clear that empty displays of patriotism are no substitute for unwavering devotion to progress, saying, “We must never relinquish our sense of justice for a false sense of national pride.”

Similarly, the late Texan columnist Molly Ivins reminded us that there is more to patriotism than flag-waving and fireworks. “I believe that patriotism is best expressed in our works, not our parades,” she wrote. “We are the heirs of the most magnificent political legacy any people has ever been given. ‘We hold these truths to be self-evident…’ It is the constant struggle to protect and enlarge that legacy, to make sure that it applies to all citizens, that patriotism lies.”

Today, that struggle has taken on a renewed sense of urgency. The ongoing efforts to weaken health-care access, gut environmental protections, roll back voting rights, restrict immigration and ban travel from Muslim-majority countries (among other policies) constitute nothing less than a full-blown assault on the rights to life and liberty envisioned in the Declaration of Independence. For many Americans, the pursuit of happiness is getting harder every day.

Yet, in the face of such threats, it is inspiring to see millions of people nationwide engaging in the political process, many for the first time in their lives, and making their voices heard. In the resistance to Trump, we see clearly the resilience that has enabled Americans to overcome dark chapters in our country’s past. In the growing movements demanding justice and equality for all, we see the hard work of patriotism flourishing all around us.

“In times of crisis,” the historian Eric Foner wrote after the September 11 attacks, “the most patriotic act of all is the unyielding defense of civil liberties, the right to dissent and equality before the law for all Americans.” This is one of those times.