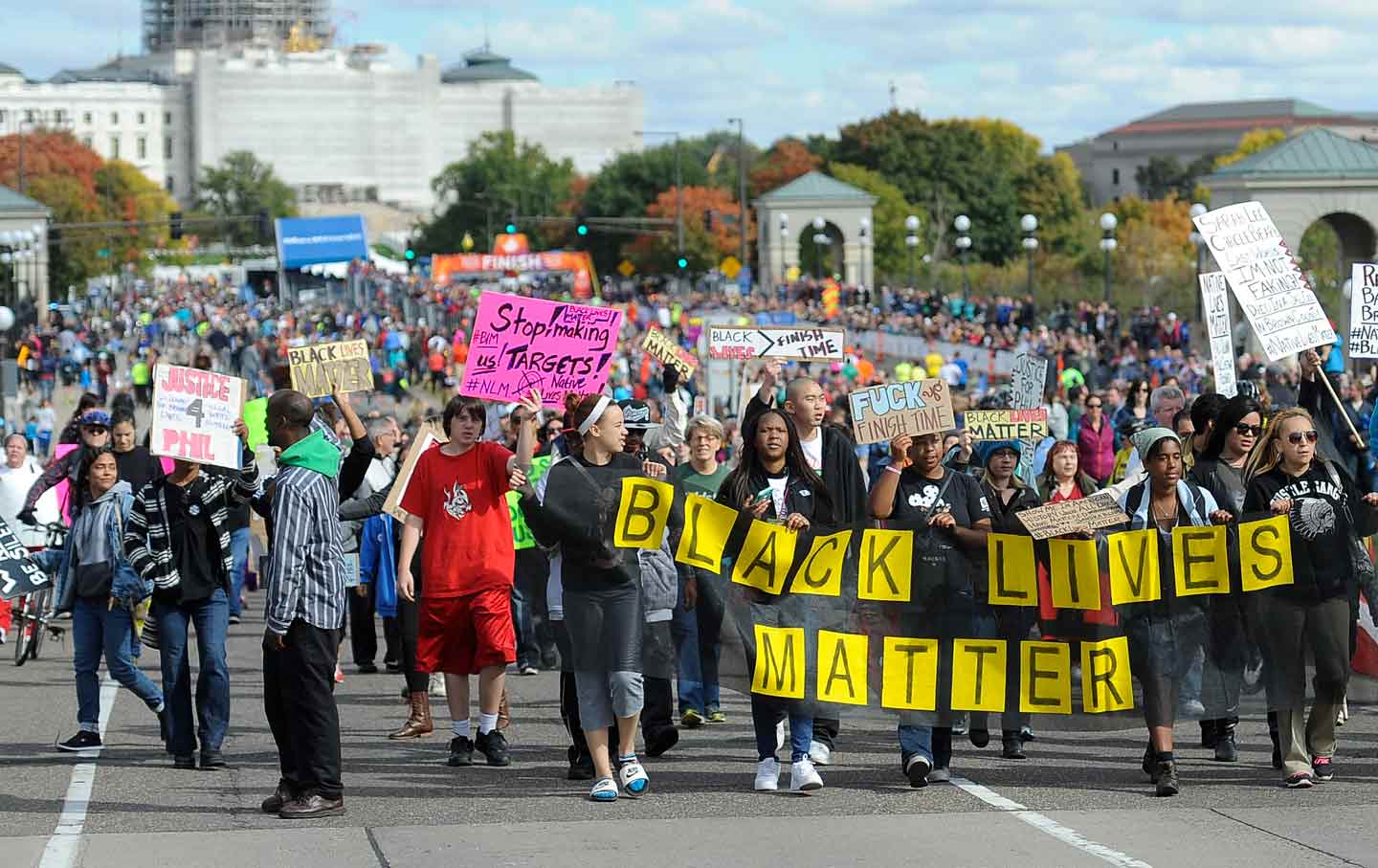 One commonly asked question about this moment in black-led organizing—what some broadly refer to as the Black Lives Matter movement—is what its participants want. What are BLM’s goals, and why, some critics ask, is the movement so reactive, so vocal and visible, only in response to police violence against black people?

What may seem at first glance like dreamy rhetoric that lacks the teeth to ensure real change is actually a tool kit.

Now, anyone with such questions can refer to “A Vision for Black Lives,” which lays out six demands and 40 corresponding policy recommendations to paint a picture of what today’s black activists are fighting for. The Movement for Black Lives, a coalition of more than 50 organizations representing black people nationwide, made the policy platform and accompanying website public on August 1. Among the demands are calls for “an end to the criminalization, incarceration, and killing of our people” and “independent Black political power and Black self-determination in all areas of society.”

At both the Democratic and Republican conventions last month, there were plenty of indications that conversations strengthened and sustained by the current movement to end antiblack racism have made it to the national stage. The “Mothers of the Movement”—women whose children were killed by police or vigilantes or who died while in police custody—shared their stories at the Democratic National Convention, making the case that their fight for justice would be in good hands with a Clinton presidency. The previous week, Milwaukee County’s Sheriff David Clarke Jr., a black man, tried to calm the nerves of the largely white audience at the Republican National Convention, assuring them that Donald Trump could restore law and order and put an end to the “anarchy” that BLM inspires.

“A Vision for Black Lives” emphasizes the movement’s independence from party politics and its desire to prioritize solutions that address root causes over the incremental or bipartisan proposals more likely to win a presidential candidate’s support or move through an obstructionist Congress. For example, the nearly 40 policy recommendations include the following (as listed in the group’s August 1 press release):

“Immediately pass state and federal legislation that requires the U.S. to acknowledge the lasting impacts  of slavery, and establish and execute a plan to address those impacts.”

“Democrats and Republicans are offering anemic solutions to the problems that our communities face,” said Marbre Stahly-Butts, a member of the eight-person Movement for Black Lives policy leadership team that steered the collaborative research and writing process over a yearlong period. “We are seeking transformation, not just tweaks.”

Recommendations like those cited earlier may strike some people as too broad, too pie-in-the-sky. But the BLM vision statement offers greater depth for readers who want to know how to translate the words into grassroots action. The extended policy brief on the demilitarization of law enforcement, for example, includes information on bills in New Jersey and New Hampshire that could serve as model legislation in other states. There’s also advice on how to use an executive order issued by President Obama last year to demand that local elected officials reject military-grade equipment for police departments and that university presidents do the same for campus police. What may seem at first glance like sweeping rhetoric that lacks the specific teeth to ensure real change is actually a tool kit for anyone ready to do the long-term work of running local, state, or national advocacy campaigns.

Some of these campaigns are already active but unknown to people new to organizing and activism. The BLM vision statement seeks to change that by highlighting existing campaigns powered by online petitions alongside the policy platform. Among these is the campaign to replace County Attorney John Choi with an independent prosecutor in the shooting death of Philando Castile, who was killed by a police officer in the St. Paul suburb of Falcon Heights last month.

More than two dozen black-led organizations— including the Black Youth Project 100, the BlackOut Collective, the Center for Media Justice, the Million Hoodies Movement for Justice, and Southerners on New Ground—created the vision statement together, said Stahly-Butts, who is also a policy advocate at the Center for Popular Democracy. “Those of us who have been inside this movement have seen there’s work happening across the country,” she continued. Together, they set out to answer the question: “How do we amplify what’s already happening?”

Editor’s note: This piece was updated on August 10, 2016, for inclusion in our print edition.

Authors of the BLM statement say that policy development is just one of many necessary tactics. Protest, direct action, and advancing conversations that critique norms around race, gender, and sexuality are all part of the movement’s work as well, said Thenjiwe McHarris, another member of the eight-person policy leadership team. But articulating a set of demands and then advocating for those demands to be met are critical, too. Throughout their collaboration, the coauthors referred to earlier policy statements, such as the Black Radical Congress’s “Freedom Agenda” and the Black Panther Party’s “10-Point Program,” in an effort to better understand the black-led policy efforts that have come before.

“It builds on the legacy of the black radical tradition,” McHarris said of today’s “Vision for Black Lives.”