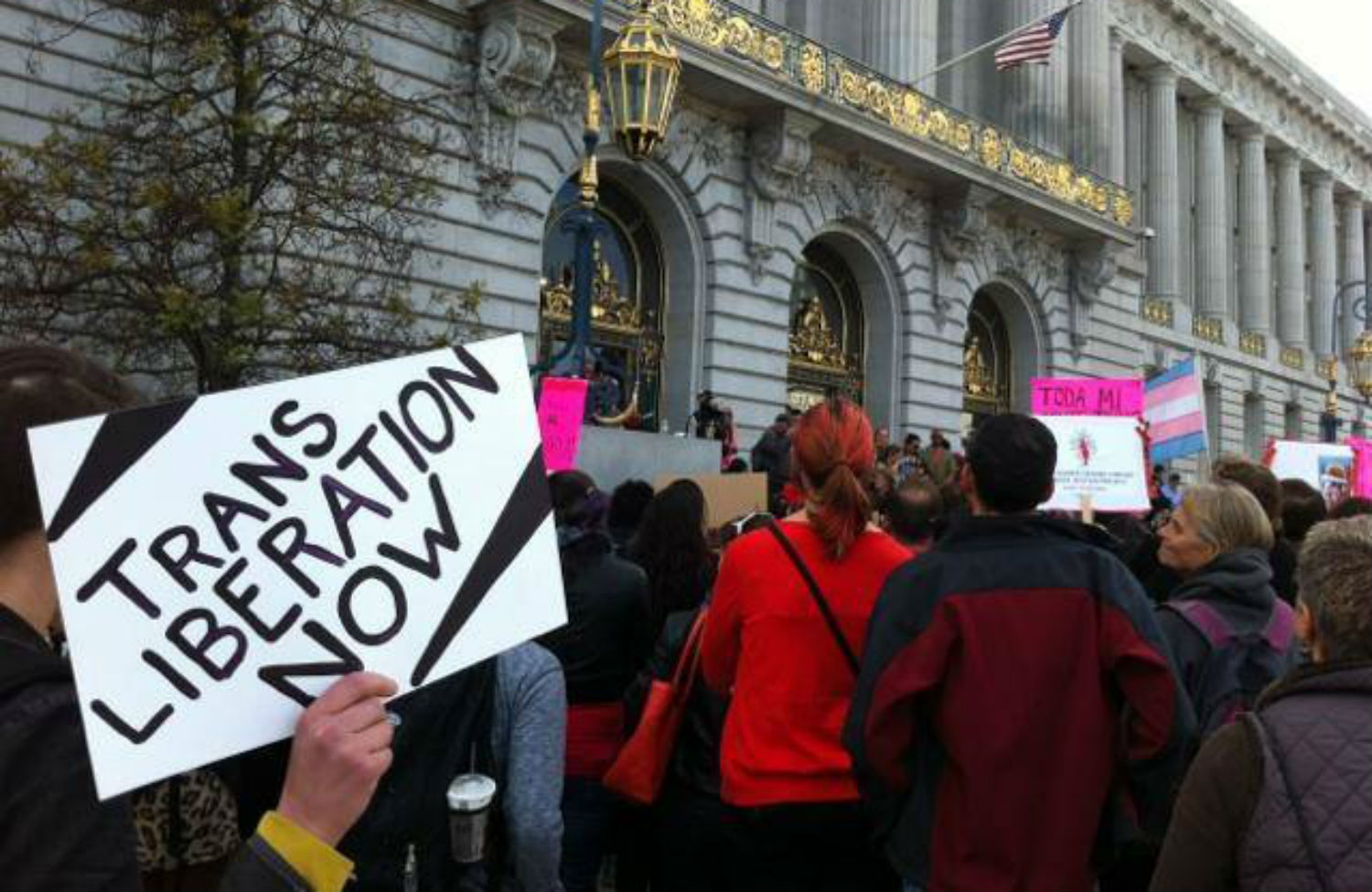 Trans* Activists for Justice and Accountability Coalition (TAJA’s Coalition) gather at San Francisco City Hall on February 10, 2015 in the wake of the killing of Taja de Jesus, a trans woman of color. (Photo by Sasha Buchert)

This week, writer and MSNBC host Janet Mock noted on her blog that at least six trans women have been killed in the United States since the start of 2015. The magnitude of the violence is astounding, as is its pace: By this time last year, no homicides of trans women had been reported.

Of the women killed these past seven weeks, five were trans women of color. On her blog, Mock offered her take on why violence against this community is pervasive and why there’s so much confusion around how to best confront it: “Trans women are targeted because we exist at vulnerable intersections of race, gender and class. My sisters are vulnerable because no one movement has ever centered the bodies, lives and experiences of these women, except for the severely underfunded, largely volunteer-staffed work of organizations run by and for our communities.… Trans women of color dangerously fall in between the cracks of racial justice, feminist and LGbt [sic] movements.”

A new collaboration between the national, California-based Transgender Law Center (TLC) and the grassroots LGBTQ organization Southerners on New Ground (SONG) has the potential to help bridge these movement gaps, and in a region that needs the added support. Nearly a third of LGBTQ people in the United States live in the South, and of the six trans women killed this year, three lived in Southern states—Texas, Louisiana and Virginia. SONG focuses on anti-criminalization and safety within the South’s LGBTQ communities, what its co-director Caitlin Breedlove calls “life and death issues.” I spoke with Breedlove last week to learn more about the partnership, TLC@SONG, which will place two new TLC hires with a legal and policy focus alongside SONG staffers in Atlanta. This conversation has been edited for clarity and length.

DMcC: What’s an example of something that’s come up for a SONG member that might be handled differently once the partnership with TLC is launched?

CB: There is nothing comparable to the kind of basic Know Your Rights information that TLC provides to trans and gender non-conforming people in California. So we’re going to start providing resources through all of our networks.

In Greensboro, North Carolina, a black trans man was stopped and harassed severely by police because he was afraid when he was first asked for his license. He hesitated because he knew the gender on his ID didn’t match how he was being perceived. In his hesitation, [police] assumed bad intent, made him get out of the car, humiliated him. And that’s exactly the kind of case where the police have no right to be doing that to people because they are black and trans. If and when we have legal and policy capacity, we can give our members a choice to say, “Would you like to actually fight this to the full extent of law?”

DMcC: So TLC staffers will provide legal services to people in your network throughout the South? Will you also be crafting policy and working to get it passed?

CB: The depth of need is so profound that if we open a direct-service law-center clinic, we won’t be to meet all of the needs. One of the biggest things that we still have to consider is how do we fight back with impact litigation and how do we set precedent?

In the South, we don’t really have a shot at [passing] statewide policy, but can we win different municipal protections for trans people that could provide a different level of community safety? If we could, we could teach other people to win in different places. As we know from the right wing, sometimes when you win something in enough cities or towns, you can win statewide.

DMcC: What types of policy wins do you plan to go after?

CB: There are huge opportunities to think about things like driver’s licenses, making it easy for trans people to change their driver’s license or municipal ID. Think about healthcare, places where trans people are being deprived of their human rights because of systems that don’t make room for them and are hostile to them. Our incredible colleagues in New York, like Reina Gossett who works at Sylvia Rivera Law Project, worked for years on New York Medicaid expansion to include trans people. Kris Hayashi [TLC’s director] and I said to each other the other day, “Well, we need to speak with Reina.”

Daily violence, deep job discrimination, healthcare are all things that we don’t have to do any study [on] to know how completely horrible the conditions are around these three things for trans people.

DMcC: What do you plan to do to help interrupt the pattern of killings targeting trans women?

CB: We’re going to try to understand strategies that are working from local groups on the ground. There has to be a set of combined strategies because there’s no silver bullet, and that has to be informed by people whose voices have been shut out of organizing processes, which particularly is going to be trans people.

There’s a deep need to develop trans people of color to be organizers, and the way to train them is through organizing. So we’re going to be involving a particular emphasis on leadership development for trans women and campaigns that are anti–police brutality, anti-profiling, et cetera.

There are many trans leaders young and old in the South who have been doing that basic work of taking care of each other, organizing themselves in communities, creating services for each other, and just being a support network. While we’re focused on all of the trans people of color who have died and are suffering violence, we also need to look at how trans people autonomously have been protecting and defending themselves. The worst kind of assumption would be that there’s no trans leadership in the South. We know that’s not true.

DMcC: You’ve said that SONG’s work is focused squarely on “life and death issues.” What does that mean?

CB: We’ve never opposed gay marriage. The question we always ask is, “If so much of our [movement’s] money had not gone into gay marriage, how many people would be alive right now who we’ve lost in the past ten to fifteen years?” That is the difference between life and death issues and quality of life issues. That’s why we will fight as hard as we possibly can about life and death issues, because every single person we’ve lost was too many. Does gay marriage matter to our people or not? That’s not a real debate in my opinion, of course it matters.

But just like a Not One More [immigrants rights campaign challenging deportations] organizer said when asked about Ferguson: “We have to fight like we mean Not One More Mike Brown.” So how do we fight like we mean Not One More Lamar Edwards [a 20-year-old black gay man killed in January in Louisville, Kentucky]? Not One More Ty Underwood [a 24-year-old black trans woman killed in January in North Tyler, Texas], all of these people we’ve lost in the past six weeks? That’s a question SONG is eager to help answer and can’t answer alone, for sure.