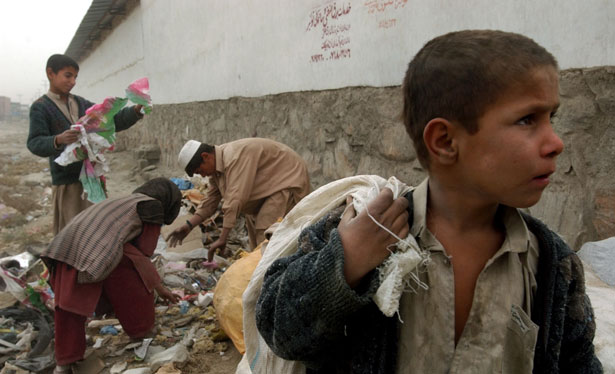 An Afghan boy holds a bag on his back as his friends collect materials to burn for firewood, in the background, in Kabul, Afghanistan. (AP Photo/Musadeq Sadeq)

“When the People Cheer: How Hip-Hop Failed Black America,” by Questlove. Vulture, April 22, 2014.

“Maybe domination isn’t quite a victory,” muses Ahmir Khalib Thompson—aka Questlove—in the first of six essays about the recent history of hip-hop for New York’s Vulture.com. Questlove has spent the past two decades as the drummer and co-frontman of the Roots, one of hip-hop’s most highly regarded bands. In these essays—an ambitious reckoning with the genre’s past that also takes stock of its present—he adopts the gravity and authority of an elder-statesman, though without any of the attendant pomp, propriety or self-importance (i.e., I can’t imagine Jimmy Carter saying “History is more interested in getting its nut off,” even if he might agree). Here, Questlove tackles the central questions of hip-hop’s ascendance: what happens when a genre which “once offered resistance to mainstream culture” is made “an integral part of the sullen dominant?” And why does hip-hop’s move from marginalized obscurity to “signal pop-music genre” feel like such a hollow—or at least “haunted”—victory? His answers, like the questions, are complex and incomplete, offering myriad opportunities for Questlove’s signature poetics. In the end, he says, “Time will tell.” Because “time is always telling. Time never stops telling.”

The capture of Joaquín “El Chapo” Guzmán was the story of the year in Mexico, the image of history’s most successful drug trafficker in handcuffs hard to believe for anyone familiar with the story. The impossibly elusive Chapo had for more than a decade thwarted the efforts of Mexico and the United States, hiding in the mountains while continuously expanding the reach of his Sinaloa cartel. However, behind the cliché tale of yet another larger-than-life drug lord—the opulent lifestyle, the daring escapes, the unbridled violence—are several important political stories that get very little attention in the American media: the use of torture by the Mexican army and the complete inefficacy of the Washington-backed “kingpin strategy.” The information that ultimately led to Chapo’s capture most likely came from torture, leading some journalists to claim that this was a wonderful, real-life example of a “ticking-bomb interrogation”—a time-sensitive situation in which torture would be tactically justified. Keefe was quick to dismiss these claims, insisting that the situation was “less of a bomb than a slow war of attrition,” and that Chapo’s capture would in actuality lead to more violence in the short term as his associates fight to take his place.

Nancy Fraser combines a lucid account of the current political and intellectual moment with an equally sharp critique of Marxist theory. She writes that “the current boom in capitalism talk” is a “symptom of a desire for a systematic critique,” one that contends with previous generations’ failure, “despite professed good intentions, to incorporate the insights of feminism, postcolonialism and ecological thought” simultaneously into a coherent critique of capitalism. Fraser attempts to address that failure. Capitalism relies on the creation and maintenance of a number of realms apparently “outside” it, she explains: “extra-economic” spheres like the family, nature and politics. Insightfully and at length, she both denies that these are really “outside” capitalism and, on the other hand, that they’re reducible to purely “economic” realms rather than being truly qualitatively different. The specific relationships she outlines between a traditional Marxist critique of capitalism and some of often seemingly unrelated social movements that populate the contemporary left (feminism, environmentalism, etc.) offer an interesting and useful way to imagine them working in concert.

In a world where the Internet is a special CIA project, anonymous bloggers are spreading insidious lies on the Internet aimed at sullying the reputation of dear leader Vladimir Putin and he will have none of it. Doesn’t it read like the back cover of a science fiction novel? In truth, anonymous bloggers threaten Vladimir Putin enough for him to feel justified in installing a new censorship law specifically targeting them. Any site with more than 3,000 visitors a day will have to register with the state, thereby sacrificing its anonymity, a precious and vital tool for dissidents in Russia. The Times writes, “Russia is among a growing list of countries that have sought to shut down Internet voices circumventing a subservient national news media.” The law will take effect on August 1 and failure to comply may result in a fine up to $142,000.

While the West was settled, the director of the US Geologic Survey (1881-94) John Wesley Powell pushed hard to define new state boundaries according to watershed. He is now yelling, “I told you so!” from his grave. This piece profiles how, by practicing state-aided regional water-governance, Santa Ana River watershed’s 5.9 million citizens have avoided water shortages in California’s historic drought. The question is no longer if watershed governance is a good idea. “The question is,” to quote Cantú, “How do we get back to the original idea—to get all of the water managers in a watershed to work together on projects that involve the same drops of water?” In California, it seems, a lack of simple intra-watershed communication is often to blame. Powell, after long last, is having his moment—thanks, climate change!

“The Case for Rebooting the Network Neutrality Debate,” by Barbara van Schewick. The Atlantic, May 6, 2014.

It’s interesting to read Barbara van Schewick’s thorough argument against the FCC proposal to (further) limit net neutrality, alongside the Vice Motherboard story on the few activists actually protesting at the FCC. The disconnect that Motherboard’s Meghan Neal points out between the surge of clicktivism on the issue and the meager physical turnout may help explain why van Schewick (or her editor) has felt the need to head her first section, “Net Neutrality: Not Just An Abstraction.” NPR has begun past stories with similar qualifications, along the lines of, “although net neutrality may sound boring…” In this context, van Schewick does a good job showing how ending net neutrality is indeed a very material issue that would not only directly affect consumers but more generally dampen the Internet’s vitality by making innovation the realm of only those with significant resources to get started.

“A Return to the Dark,” by Christina Lamb. The Wilson Quarterly, Spring 2014.

My teenage niece can’t stop talking about the last book she read, lent to her by a teacher—The Kite Runner. It led her to quite an epiphany: the country she imagined, with a citizenry straight out of an oriental fever dream, was in fact comprised of humans, not terrorists. In Christina Lamb’s piece for The Wilson Quarterly, which devoted its entire spring issue to Afghanistan, Lamb focuses on a few narratives as she examines what has happened to women in the country since the US invasion, and what may happen when the troops pull out later this year. “Telling those stories is important,” she says, “as long as they are told, then there is at least the possibility of bearing witness to the long struggle of Afghan women for better lives.” These two very different interpretations of our engagement with Afghanistan, Lamb’s and my niece’s, explain a lot about how the war is understood (or isn’t) in our country. In between that span of information we have fiction like Hosseini’s novel and non-fiction like Lamb’s piece to humanize Afghanistan for those who don’t know enough, and re-humanize it for those numb from knowing too much.

“Maternal deaths in childbirth rise in the U.S.,” by Carol Morello. The Washington Post, May 2, 2014.

This Washington Post article notes that American maternal mortality may be rising because women who are not the healthiest among us (those who have diabetes, hypertension, etc.), and who would previously have died or been unable to have children before, are now—through longer lives and better medical technology—able to give birth. That’s a fair enough argument, but Canada and the UK, which both have much better maternal mortality rates than the United States, are also strugging to support populations who live longer and are less healthy. Dare I ask: could the problem also be access to health care? And more importantly, access to high-quality, consistent, patient-centered pre- and post-natal care, in which mothers are tracked throughout their pregnancy and the baby’s first year of life, and not just strapped on a hospital gurney and rushed through labor? Statistics only tell so much, but when a study shows that the country’s maternal mortality rate has more than doubled in less than two decades, it should cause national reflection about how we’re giving care and to whom.

“Green is Good: The Nature Conservatory wants to persuade big business to save the environment,” by D.T. Max. The New Yorker, May 12, 2014.

Mark Tercek, the head of the Nature Conservancy, is an unlikely environmentalist. A former partner at Goldman Sachs, he believes, as D.T. Max puts it in this New Yorker profile, that “nudging big business in a green direction… can do far more good than cordoning off parcels of Paradise.”

Tercek—who took a 90 percent salary cut when he left banking to join the Conservancy in 2008—regards the organization’s traditional mission as a hopeless cause: even “preserved” land is not immune to climate change. Under his leadership, the world’s largest nongovernmental environmental organization now collaborates with the very businesses activists have been fighting (e.g., the Dow Chemical Company).

Some in the environmental movement see the Conservancy’s engagement with companies like Dow as smart and necessary and practical, a welcome emergence from the purist fantasy that ecological sustainability requires a rejection of economic development altogether. But, as Max points out, “There is an obvious limitation to this approach: business logic often doesn’t line up with green logic.”

Writing at the Washington Monthly, Kathleen Geier offers an evaluation of two parts of University of Chicago economist Gary Becker’s formidable legacy: his work on the family and his theory of human capital. Acknowledging the influence that his work has had throughout the social sciences by opening up new realms of human experience for economic study, she critiques him for failing to take into consideration power relations that interact with neoclassical economic models. Geier makes a strong case that this expansion of economic thought is extremely sinister (and this post that describes Foucault’s reading of Becker certainly puts things in perspective), but I appreciated how she ends by recognizing the power of Becker’s influential methods.