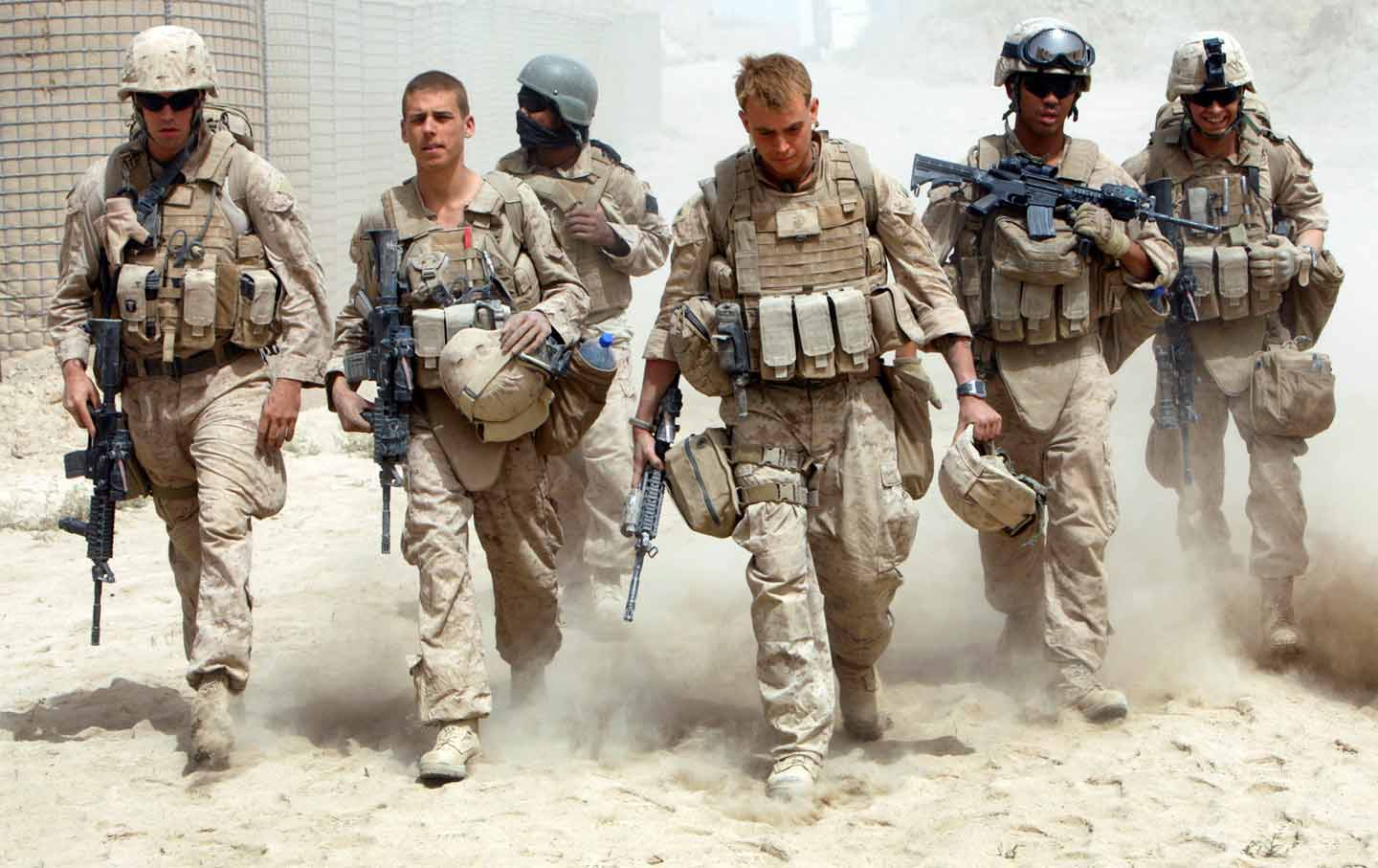 A US Navy hospital corpsman and US Marines walk inside a base in southern Afghanistan. (Reuters / Goran Tomasevic)

With Gen. John Campbell’s tour of duty in Afghanistan finished, a new commander has taken over. Admittedly, things did not go well during Campbell’s year and a half heading up the International Security Assistance Force (ISAF) there, but that’s par for the course. In late 2015, while he was in the saddle, the Taliban took the provincial capital of Kunduz, the first city to be (briefly) theirs since the American invasion of 2001. In response, US forces devastated a Doctors Without Borders hospital. The Taliban are also now in control of more territory than at any time since the invasion and gaining an ever-firmer grip on contested Helmand province in the heart of the country’s poppy-growing region (and the staggering drug funds that go with it). In that same province, only about half of the “on duty” Afghan security forces the United States trained, equipped, and largely funded (to the tune of more than $65 billion over the years) were reportedly even present.

On his way into retirement, Campbell has been vigorously urging the Obama administration to expand its operations in that country. (“I’m not going to leave,” he said, “without making sure my leadership understands that there are things we need to do.”) In this, he’s been in good company. Behind the scenes, “top US military commanders” have reportedly been talking up a renewed, decades-long commitment to Afghanistan and its security forces, what one general has termed a “generational approach” to the war there.

And yes, as Campbell headed offstage, Gen. John Nicholson Jr., beginning his fourth tour of duty in Afghanistan, has officially taken command of ISAF. Though it wasn’t a major news item, he happens to be its 17th commander in the 14-plus years of Washington’s Afghan War. If this pattern holds, by 2030 that international force, dominated by the United States, will have had 34 commanders and will have fought, by at least a multiple of two, the longest war in our history. Talk about all-American records! (USA! USA!)

If such a scenario isn’t the essence of déjà vu all over again, what is? Imagine, for a minute, each of those 17 ISAF commanders (recently, but not always, Americans, including still resonant names like David Petraeus and Stanley McChrystal, as well as those like Dan McNeill and David McKiernan, already lost in the fog of time) arriving at yearly intervals, each scrambling to catch up, get the big picture, and run the show. Imagine that process time after time, and you have the definition of what, in kid culture, might be called a do-over—a chance to get something right after doing it wrong the first time. Of course, yearly do-overs are a hell of a way to run a war, but they’re a great mechanism for ensuring that no one will need to take responsibility for a disaster of 14 years and counting.

How to Play Do-Over

For journalists, when it comes to 21st-century American war, do-overs are a boon. From collapsing US-trained, funded, and equipped local militaries to that revolving door for commanders in Afghanistan to terror groups whose leaderships are eternally being eviscerated yet are never wiped out, do-overs ensure that your daily copy is essentially pre-written for you. In fact, when it comes to American-style war across the Greater Middle East and increasingly much of Africa, do-over is the name of the game.

In movie terms, you could think of Washington’s war policies in the post-9/11 era as pure “play it again, Sam.” If this weren’t the grimmest “game” around, involving death, destruction, failed states, spreading terror movements, and a region flooded with the uprooted—refugees, internal exiles, transient terrorists, and God knows who else—it could instantly be transmuted into a popular parlor game. We could call it “Do-Over.” The rules would be easy to grasp, though—fair warning—given the recent record of American war making, it could be a very long game.

Modest preparation would be involved, since you’d be using actual headlines from the previous weeks. Given the nature of the Bush administration’s global “war on terror” (now the Obama administration’s no-name war on terror), however, this shouldn’t be a daunting proposition. Any cursory reader of the news, aged 12 to 75, will find it easy to take part. Let me give you just a handful of examples of how Do-Over would work from a plethora of recent news stories:

At the moment, Pentagon officials are touting such an offensive all over again for spring 2016, or if not quite now, as Chairman of the Joint Chiefs Gen. Joseph Dunford put it recently, at least not in “the deep, deep future.” (Iraqi military officials, however, already beg to differ, predicting that such an offensive will be at least many months away “or longer.” Welcome to the Mosul offensive of 2017!) Of course, we already have a remarkably clear idea of what Mosul will look like in the wake of such an offensive, should it ever happen. After all, we know just how the smaller Iraqi city of Ramadi ended up after a six-month campaign by US-trained and -backed Iraqi troops to retake it from Islamic State militants: largely depopulated, 80 percent destroyed, and a landscape of rubble, thanks to hundreds of US airstrikes, street-by-street fighting, and IS booby traps (with no rebuilding funds available). In other words, we already have a Do-Over vision of a future Mosul, should 2016 finally be the year when those Iraqi troops (and American advisers and planes) arrive in the IS-occupied city. (Perhaps the only non-Do-Over possibility is the grimmest of all—that, as the American Embassy in Baghdad has suddenly taken to warning, Mosul’s massive, compromised dam could collapse as the winter snows melt, essentially sweeping the city away and possibly killing hundreds of thousands of downstream Iraqis.)

On the positive side, since the American “war on terror” shows no sign of abating or succeeding, and as no one in Washington seems ready to consider anything strategically or tactically but more (or slightly less) of the same, Do-Over has a potentially glowing future as a war game. After all, based on almost 15 years of experience from Afghanistan to Nigeria, further destruction, chaos, the growth of failed states, the spread of terror groups, and monumental flows of refugees seem guaranteed, which means that there should never be a dearth of Do-Over-style headlines to draw on.

One warning, though: In the annals of such games, this one is unique. Because of the nature of the American way of war in our time, Do-Over may be the only game ever invented in which there can be no ultimate winner and, unfortunately, the tagline “Everyone’s a loser!” doesn’t seem like a selling way to go. Though the game is still in its planning stages, perhaps the ending has to be something realistic and yet thrilling like: “You’ve been Done-In!”