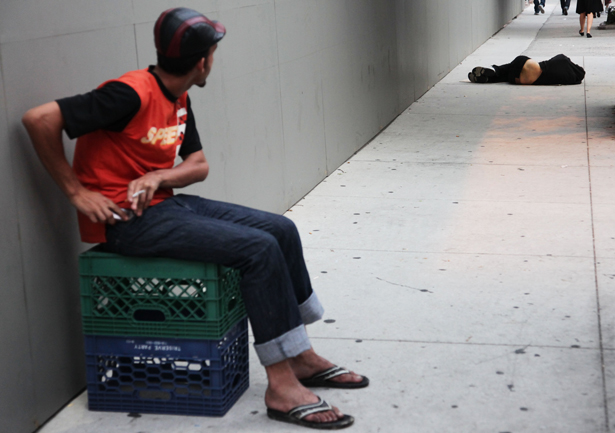 A destitute man sleeps on the sidewalk under a holiday window at Blanc de Chine, Wednesday, Nov. 20, 2013 in New York. (AP Images)

On January 8, 1964, nearly fifty years ago, President Lyndon Baines Johnson declared in his first State of the Union address that his new administration “today, here and now, declares unconditional war on poverty in America.” The Nation was immediately enthusiastic and supportive, writing in its lead editorial, “The Rediscovery of Poverty,” just after the speech:

Perhaps the most remarkable aspect of the State of the Union address was that Mr. Johnson not only spoke about poverty, but spoke at length, emphatically, and with the apparent intention of actually meaning to alleviate it. The second most important aspect, gearing into the first, was the suggestion that the money was there for such a program, that it could be hacked out of the military program, and that Mr. Johnson proposed to swing the pickax. All this was said with a Rooseveltian resolution, sincerity and directness that exhilarated some listeners as much as it frightened others—those others who feel that poverty should be neither seen nor heard…

What is amazing is that it took fifteen years to get out from under the incubus of the cold war and to show a decent concern for the victims of industrialism. Now—it is as true as it is hackneyed—words must be followed by deeds. That is not up to the President alone, but he has supplied the words, and they are good.

The rhetorical declaration of war was punctuated by the passage in the summer of 1964 of the Economic Opportunity Act, which contained several work and welfare programs explicitly framed, as Johnson put it, as “a total commitment by this President, and this Congress, and this nation, to pursue victory over the most ancient of mankind’s enemies.” Those programs—combined with the vital additions of Medicare, Medicaid, and other Great Society-era initiatives targeted for severe cuts or even elimination in recent years by Republicans—have made the experience of poverty in America less dire than before 1964.

But there is a still a long way to go before achieving President Johnson’s stated objective: “total victory.” The tragic misadventure in Vietnam distracted the administration and the country from the one war President Johnson actually did declare, and more recent decades have seen the war on poverty co-opted by the proponents of austerity and turned into an unrelenting war on the poor.

There could be no more honorable or productive way for President Obama and his congressional Democratic allies to mark the fiftieth anniversary of President Johnson’s declaration than to rededicate themselves to passing legislation—a minimum wage increase, universal pre-school access, reversal of recent cuts in food stamps (and expansions beyond the previous levels), job training assistance, and extensions of unemployment insurance, to name a few—which would at least signal a renewal of what President Johnson acknowledged fifty years ago would “not be a short or easy struggle…but we shall not rest until that war is won. The richest Nation on earth can afford to win it. We cannot afford to lose it.”

The Nation, which will mark the fiftieth anniversary of the war on poverty with a special issue next month, is one of the only American media outlets which maintains a regular poverty beat (with writers like Sasha Abramsky, author of The American Way of Poverty, and Greg Kaufmann), and we are committed to covering this issue and give voice to those most affected until this, the richest nation on Earth, eradicates what President Johnson called “the most ancient of mankind’s enemies” from our midst.