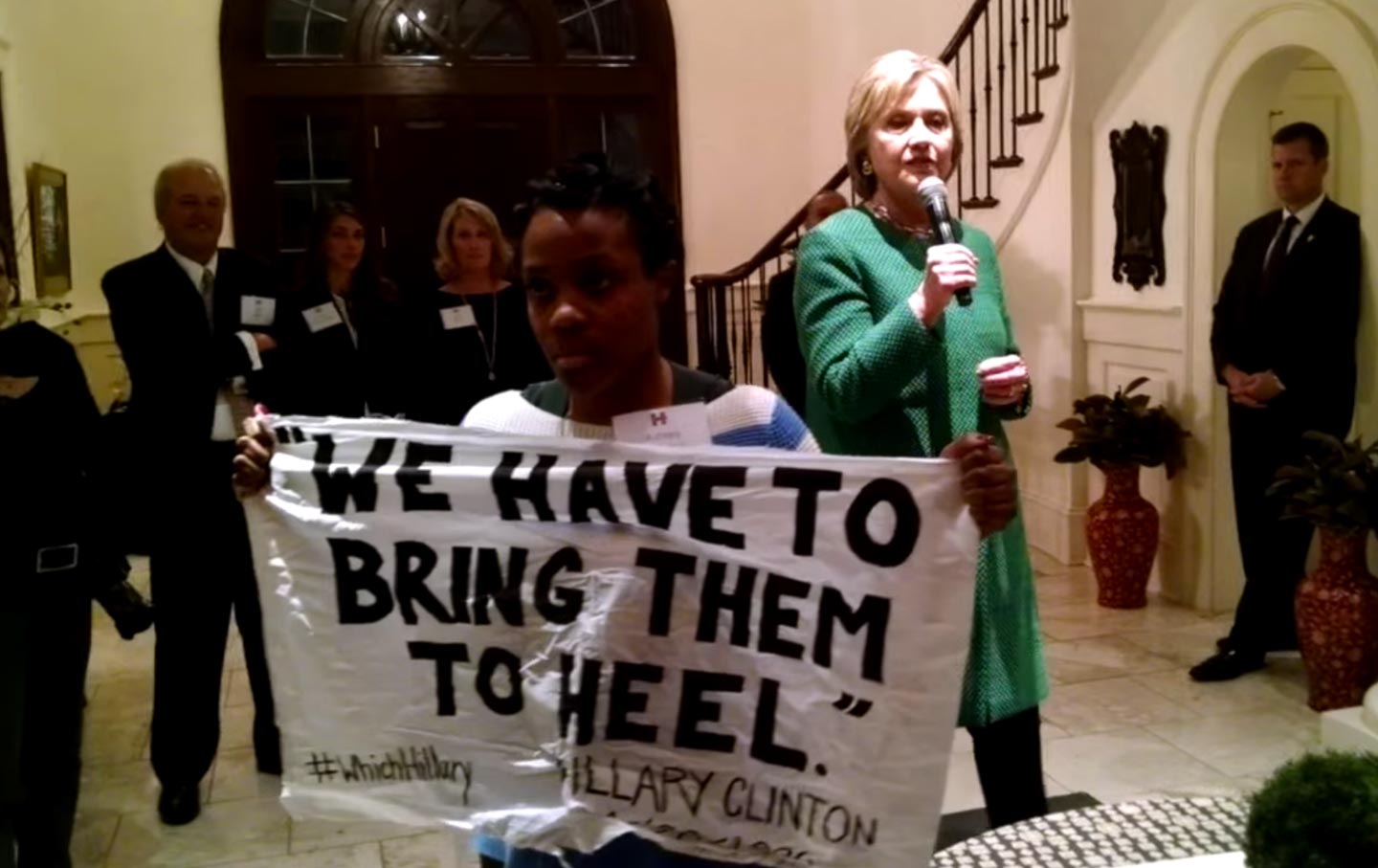 On Wednesday night, Ashley Williams, a black queer organizer living in Charlotte, North Carolina, interrupted a private Hillary Clinton fundraiser. Williams, elbowing to the front of the audience, unfurled a sign that read “We have to bring them to heel,” a line from Clinton’s now-infamous 1996 “super-predators” speech, recently cited in Michelle Alexander’s article on the Clinton legacy for The Nation.

As Williams demanded that Clinton apologize for mass incarceration, voices in the crowd muttered, “You’re a trespasser” and “That’s inappropriate, please.”

Clinton fumbled for a response, ultimately landing on “Do you want to hear the facts or do you just want to talk,” and “You know what, no one’s ever asked me before. You’re the first person to ask me, and I’m happy to address it, but you’re the first person to ask me, dear.” Clinton then turned back to her audience, as Williams was escorted out of the event, relieved to be able to “get back to the issues.”

The Nation spoke with Williams on Thursday afternoon about confronting Clinton, what they’re looking for from a presidential candidate, and their thoughts on the Black Lives Matter movement more broadly.

The transcript has been lightly edited for clarity.

How did you get involved in activism?

So I’m a black queer organizer, and I live in Charlotte, North Carolina, where I organize a lot of actions. I’m really interested in police accountability. We’re thinking about abolishing the police, as well as Black-Palestinian solidarity as well as climate justice and racial justice. I’m also a graduate student.

Are there any personal experiences that brought you into this kind of work?

I mean, I’m a person of color, and I’m a queer person living in the South, so it’s kind of hard to escape how these issues are affecting me in a very material way.

How did last night’s action come about?

We got into the fundraiser just like the rest of the folks who attended. There were paid tickets, and I interrupted Hillary while she was giving her speech.

What were you aiming to accomplish through this confrontation?

I wanted an apology from Hillary Clinton to black people, and I wanted her to acknowledge that the policies that she supported directly impacted folks of color in the United States in terms of mass incarceration.

And were you satisfied with her response?

No, I think that her response reflected Clinton’s inconsistency. But we know that she’s been inconsistent on these issues, and we know that according to her these are not issues that she’s interested in. She’s campaigning around this state right now, trying to get the black vote, and she’s going around saying, “It’s time to listen.” So she had an opportunity to listen last night, and she wasn’t listening.

What are you looking for from a candidate, at this point? Are you supporting any candidate in particular?

I’m supporting black people. I’m not supporting any political candidate at this point who’s running for president. But I will say that I’m for voters looking closely at the records of all the people who are running. And I want people to examine people’s records in terms of how they have or have not shown up for racial justice. I want them to feel confident in making important decisions from that point. I want candidates to stand by the things that they’ve said and the policies that they’re responsible for, and I want them to make sense of the things that are inconsistent.

Do you see past movements an inspiration or are they stifling today’s movement?

What do you look for from today’s movement?

I look for a safe place for black, trans, queer people to exist in and to resist in. I look for people who are of more dominant identities to be open to listening to those folks and hearing what they have to say. I imagine a movement that’s safe for those folks to participate in. And ultimately a movement that moves toward liberation and action.