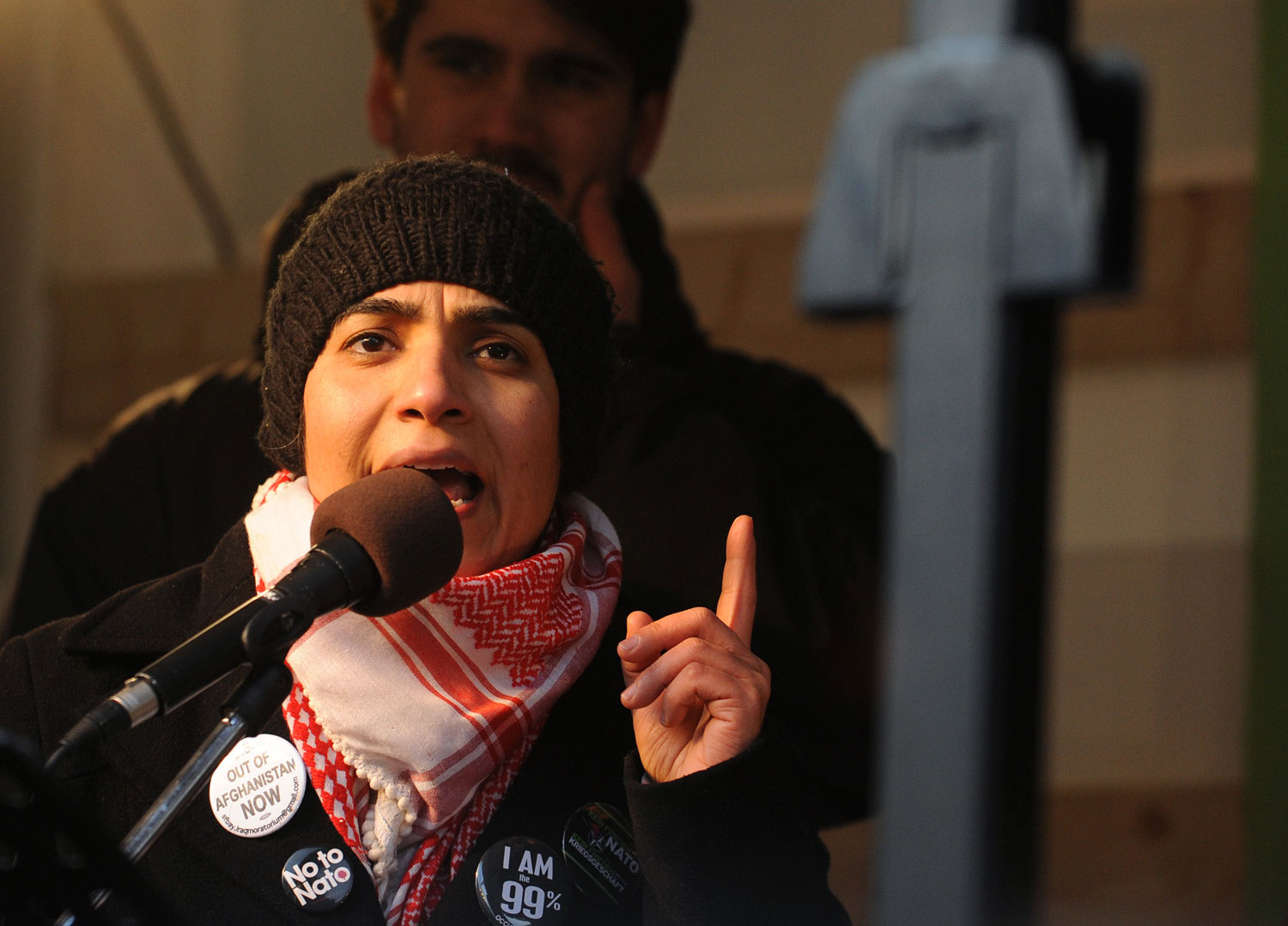 In 2003, Malalai Joya was the 25-year-old director of a clinic and orphanage in Afghanistan’s Farah province. She was not a scheduled speaker at a national convention on the post-invasion future of the country, but she took the mic anyway and delivered an electrifying address. Noting the warlords in attendance, she asked: “Why would you allow criminals to be present here?” Two years later, she became the youngest person elected to the Afghan Parliament. Two years after that, having refused to scale back her criticisms, she was booted from her post. An advocate for women’s rights, secularism and nonviolence, Joya argues that neither the warlords who kept her country in despair during the Soviet era nor members of the Taliban should be any part of its government today. In her 2009 memoir, A Woman Among Warlords, she writes of the dangers she’s faced as a result.

I spoke with Joya while she was on tour in the US to share her observations on the twelfth anniversary of the invasion of Afghanistan. This interview has been edited for clarity and condensed. —Dani McClain

Dani McClain: You got your start as an educator and activist teaching women in Pakistan’s refugee camps how to read and write and running underground schools for girls in Afghanistan. How has the situation for women changed?

Malalai Joya: In some big cities, some women have access to jobs and education. But mainly the projects [that employ them] were made to justify the occupation. In rural areas, the situation for women is like hell. During Taliban times, we did not have a Parliament. Today we have one, but it’s a mafia Parliament. The majority of seats belong to warlords, drug lords, misogynists, even Taliban. Twenty-eight percent of Parliament is women, but most of these women are pro-warlord, pro-occupation and have a symbolic role.

The catastrophic situation of women was a very good excuse for the US and NATO to justify their criminal war in Afghanistan. They misuse the miseries of Afghan women for their propaganda machine. Of Bibi Aisha, a woman who had her nose and ears cut off by her husband, Time magazine asked, “What happens if we leave Afghanistan?” It would have been better if they changed this to: “What happens to women while we are in Afghanistan?”

Self-immolation in Afghanistan is skyrocketing. We’ve seen rape cases, acid attacks, burning girls’ schools, cutting the nose and ears off women, beating women with lashes in public, executing them in public, accusing them of adultery without even bringing them to the symbolic courts that we have.

DM: What changes do you anticipate following the US and NATO withdrawal?

MJ: These twelve years, we’ve lived in civil war. In the Taliban time, we had one enemy: the Taliban. Now we have three: the Taliban, warlords and the occupation forces. When they leave, the situation will be even bloodier—not because of the withdrawal of the troops, but because more terrorists will be brought into power.

Gulbuddin Hekmatyar has thrown acid on women’s faces and committed other acts of violence against women. Now Hamid Karzai invites him to work with this puppet regime. The US and NATO presence is making the struggle for justice and peace much harder because they empower these reactionary terrorists, who are great obstacles for true democratic-minded elements in my country.

DM: What areas of organizing and resistance give you hope?

MJ: Where there is oppression, there is resistance. But mainstream media never report on those organizations and nonviolent demonstrations.

The Solidarity Party is a progressive party, as is the Social Association of Afghan Justice Seekers. When they became aware of the list of the 5,000 Afghans who were massacred in 1978 and 1979—most of them secularists, some of them leftists—they organized a huge two-day demonstration in Kabul. Just recently in Jalalabad, five civilians went hunting, and all of them, including three children, were killed during an airstrike. Big demonstrations took place in different parts of Afghanistan.

These Afghans, these progressive and intellectual individuals, are the secret heroes and heroines of Afghanistan.