Divest Middlebury activists gather outside a Board of Trustees meeting to show their support for divestment. (Photo by Elise Leise ‘22)

Crowded in a small student home in Middlebury, Vermont, three generations of Divest Middlebury activists gathered from across the country to witness the outcome of a long-awaited vote. For some, this marked the culmination of their first college semester. Others had been hoping for this announcement since they started the campaign in 2012. After seven years of student-led activism, nothing was harder than keeping quiet about what we learned: Middlebury’s Board of Trustees had unanimously voted to fully divest the institution’s $1.1 billion endowment from the fossil-fuel industry.

On January 26, Middlebury trustees voted on Energy 2028, a campus-wide sustainability initiative. Along with divestment, Energy 2028 also includes a transition to 100 percent renewable energy, a 25 percent reduction in energy consumption, and expanded environmental education. This successful resolution not only reinforces Middlebury as a higher-education climate leader; it demonstrates the power of relentless student activism.

Divest Middlebury launched a similar campaign in 2013; in response, the trustees announced that Middlebury would not divest. Despite this, as student activists, we knew we had to keep fighting. Overwhelming scientific evidence shows that we must rapidly transition away from fossil fuels in order to avoid climate catastrophe. The core business model of fossil-fuel corporations is simply incompatible with a sustainable future, of which we will be the stewards. Considering these impending climate threats, we knew that the question was not if Middlebury would divest, but when. 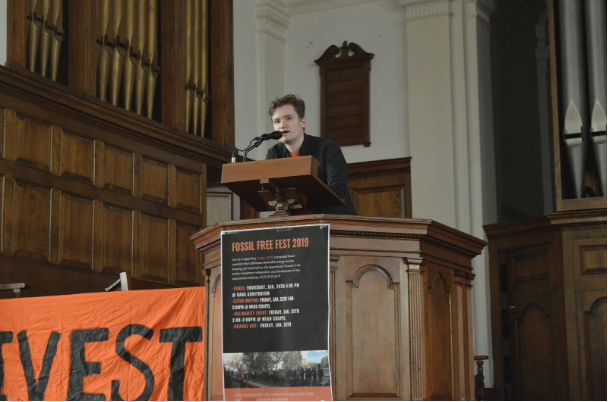 Divest Middlebury activist Gabe Desmond shares how climate change has affected his own life during a rally. Photo by Alec Fleischer ‘20.

Through persistent activism, dozens of dedicated students transformed divestment from a far-fetched idea to an inevitable reality. As the current leaders of Divest Middlebury, we are proud of our college. Middlebury is now part of a global movement of over 1,000 portfolios with $8 trillion in combined assets that will never again be invested in fossil fuels.

This story was produced for Student Nation, a section devoted to highlighting campus activism and student movements from students in their own words. For more Student Nation, check out our archive. Are you a student with a campus activism story? Send questions and pitches to Samantha Schuyler at [email protected]. The Student Nation program is made possible through generous funding from The Puffin Foundation.

Our generation of Divest Middlebury activists entered the campaign in 2016. In the wake of the board’s first rejection, we built a base of support and worked to ensure that a “yes” vote could be the only possible outcome. Most of the student body already recognized the urgency of addressing climate change and passively supported divestment; our job was not to change minds but to harness the activist potential of our peers.

To gain active support, we held rallies, hosted teach-ins, and collaborated with other collegiate divestment campaigns. With this momentum, we facilitated a community-wide referendum that garnered support from 80 percent of students and 93 percent of faculty. The referendum’s indisputable results provided us with a seat at the table, and we began cooperatively working with the administration.

During our presentation to the board, we stressed how climate change already threatens students’ well-being. Extreme weather events, geopolitical uncertainty, and sea-level rise are all slated to get worse as our generation moves into adulthood. We reminded the trustees that marginalized communities experience the worst effects of a warming world while contributing the least to the crisis. It is illogical to pay for students’ education by investing in corporations whose business models guarantees those very students will not have a livable planet to enact this education upon.

Divest Middlebury activists march across campus to show their demonstrate their support of Energy 2028. Photo by Elise Leise ‘22.

Given Middlebury’s mission to “educate students to address the world’s most challenging problems,” trustees were convinced that divestment was both necessary and fiscally responsible.

Through collaboration with carbon pricing activists, Energy 2028 emerged as a primarily student-run campaign that holistically addresses climate change. (The divestment and carbon-pricing campaigns were both launched by the Sunday Night Environmental Group, the same club that founded 350.org—a leading climate-advocacy organization.) Divestment helped fast-track other campus environmental initiatives and, in turn, these other campaigns made divestment more palatable to reluctant trustees. Embracing a message broader than divestment alone, we organized a final series of rallies and educational events. We were ecstatic to see trustees who were previously against divestment show their support for Energy 2028.

By building student power, cultivating collaborative relationships, and packaging divestment as part of a larger effort, we turned a “no” into a unanimous “yes.” We see this shift as evidence of the growing strength of the climate justice movement across the country.

The track record of this rural Vermont student group speaks volumes to the power of collective action. In solidarity with global activists, we call on all institutions to stand for climate justice. We changed the zeitgeist of our institution; so can you.