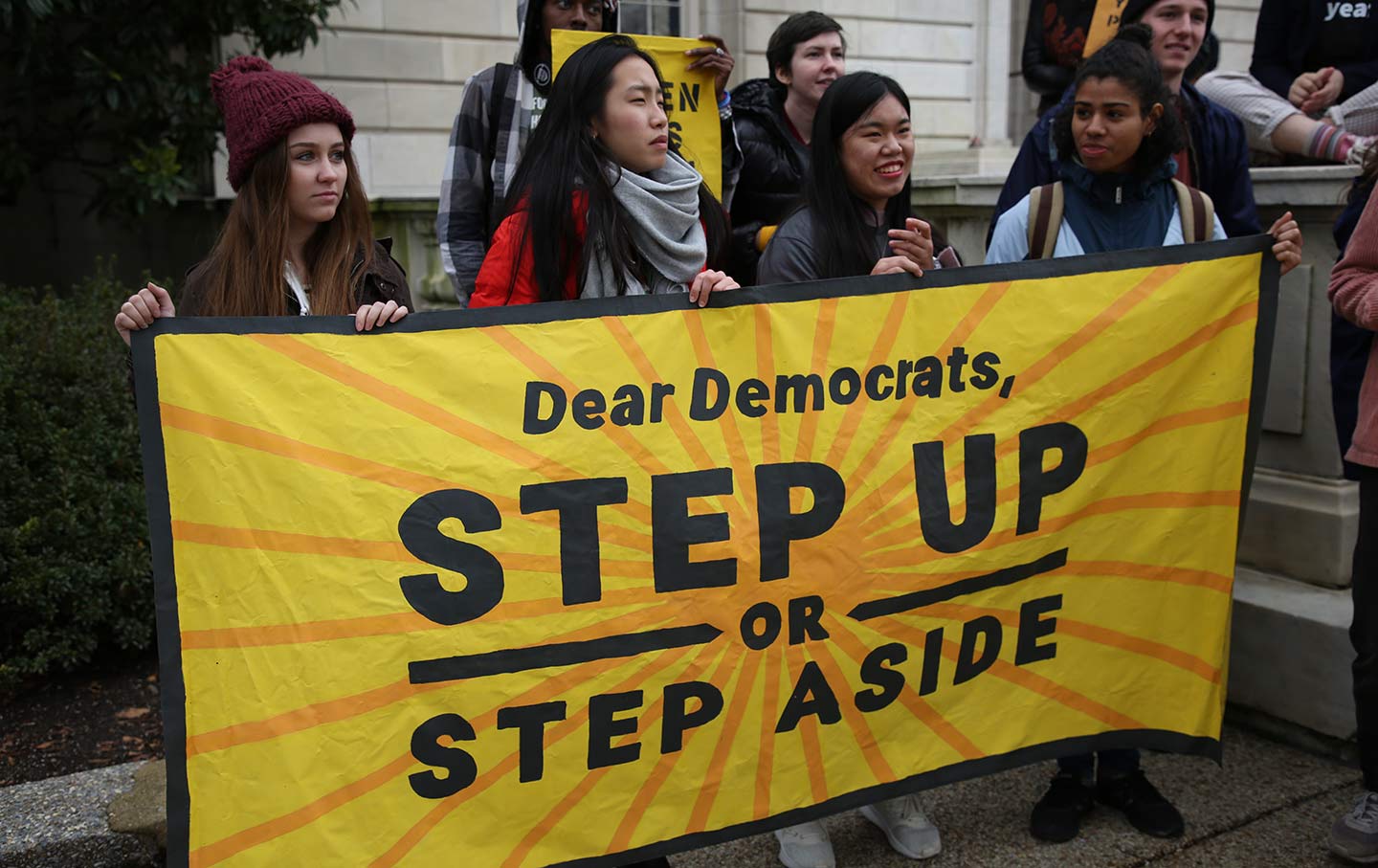 On November 13, I was one of 51 young climate activists arrested outside Representative Nancy Pelosi’s office, where we had held a sit-in to demand that Democratic leadership sign the No Fossil Fuel Money Pledge and back the proposed Select Committee on a Green New Deal.

I was arrested next to my friend Julia, from California, where 85 people, and likely many more, died from the recent climate-induced wildfires. I sat across from Georgette, from North Carolina, where Hurricane Florence killed 49 people and left over $170 billion in damages. And I am from Oregon, where 70 drought-induced wildfires burned simultaneously last summer.

But I didn’t meet Julia or Georgette protesting. I met them while knocking on doors and supporting voter turnout for Democratic candidates with Sunrise, a youth-led movement working to reclaim our generation’s political voice in the face of a climate crisis that is being largely dismissed by political leaders.

Our movement of thousands of young people spent the past year working to elect leaders who will stand up for us and prioritize this crisis. Democrats below the age of 30 ranked creating new green jobs as their fourth-highest priority, but it’s remained absent from the congressional agenda. Sunrise is unifying the youth vote behind candidates who are changing this by pledging to no longer accept contributions from fossil-fuel executives, lobbyists, and corporate PACs.

Young people have witnessed the failure of climate leadership our entire lives. We’ve watched oil magnates like the billionaire Koch brothers alter the direction of both parties with their massive wealth. I was in middle school when Democrats last pushed for climate legislation—I’m now 24.

But in 2018, we saw youth-led movements like ours begin to turn the tide. Our campaign work helped flip the House by mobilizing the largest voter turnout in a century. We didn’t just elect any Democrats—we helped elect the most progressive, young, and diverse Congress in history. Over half of the new Democratic members of Congress have taken our No Fossil Fuel Money pledge. Our pressure also convinced party leaders like Senator Dianne Feinstein and Senator Bernie Sanders to join the pledge.

After months of campaign volunteering, I expected to feel relief when the Democrats won back the House. The next day, Representative Pelosi revealed that climate action is not on her legislative agenda as Speaker. Instead, she plans to revive an arcane committee from 2007 that “researches” and “educates” around climate change. This committee was inadequate a decade ago. In 2018, when people are burning alive in winter wildfires, it’s climate-change denial.

I wasn’t alone. Young voters around the country felt an urgent need to turn their fear and frustration into action. Hundreds of young people traveled to Washington, DC, to deliver handwritten letters to all Democratic leaders, including Representative Pelosi, describing how the climate crisis threatens our homes and families. Leading scientists say we have 12 years to radically transform our economy and society to avoid climate disaster. So our message to Democratic leaders was simple: Now that we’ve voted you into office, what is your plan?

We outlined what a viable one might look like, asking Democratic party leadership, including Pelosi, to take the No Fossil Fuel Money pledge. Democrats setting the agenda must untether themselves from the influence of fossil-fuel CEOs to act with the speed and scale we need. For example, Frank Pallone has taken thousands in contributions from fossil-fuel lobbyists since before I was born. Now he is expected to chair the Committee on Commerce and Energy.

About a half hour into the sit-in, one of the new representatives we helped elect, New York’s Alexandria Ocasio-Cortez, joined and asked Representative Pelosi to support her resolution for a Select Committee on a Green New Deal.

The resolution tasks Congress with developing a plan by early 2020 to decarbonize major parts of the US economy by 2030, in line with the deadlines posed by both United Nations climate experts and the latest US government reports.

The Green New Deal is the only plan that has been put before Congress that responds to the crisis with the urgency that science and justice demand. The resolution mandates that our climate plan address the environmental harm experienced by front-line communities and mitigate the “deeply entrenched racial, regional, and gender-based inequalities” across our economy.

Since our sit-in, a wave of grassroots actions have catapulted the Green New Deal from a niche policy proposal to an idea that has united the climate movement. Eighteen US Representatives, including civil-rights hero  John Lewis, endorse it currently. It’s supported by 83 of the most powerful environmental-, economic-, and racial-justice organizations.

We understand that Democrats can’t pass legislation with a climate-denying White House and GOP-controlled Senate. But they can lay the groundwork now, by developing a plan for a Green New Deal and taking the No Fossil Fuel Money pledge.

The 2020 “ideas primary” has begun, and presidential hopefuls are racing to lay the planks of their platforms. The Green New Deal is an opportunity to define a bold and clear future under Democratic leadership. This should be the first Democratic primary where every contender has taken the No Fossil Fuel Money pledge. It’s imperative that rising Democrats, including presidential hopefuls, demonstrate their commitment to an ambitious and timely climate platform if they want young people to turn out again in 2020.

This is just the beginning. A generation of climate voters is ready to engage with every part of the democratic process to confront this crisis. Since our sit-in at Pelosi’s office, over 13,000 young people have joined the Sunrise Movement and led actions demanding that Democratic National Committee Chair Tom Perez, Representative Frank Pallone, and hundreds of others back the Green New Deal. Young people will travel to DC on December 10 to demand that the new Congress prioritize climate action. We will use the same tactics that put us on the map, only bigger.

The same young people that mobilized a historic midterm turnout are now looking ahead to 2020. We will knock on doors, pressure representatives, and primary Democrats who take fossil-fuel money. We will protest and risk arrest if we must, and as we already have, to ensure this economic transformation occurs within the next 12 years.

Our generation has a right to good jobs and a livable future. The Green New Deal is a winning plan for both. Now the only question is: will the Democrats embrace it?

Our survival, young and old, depends on it.