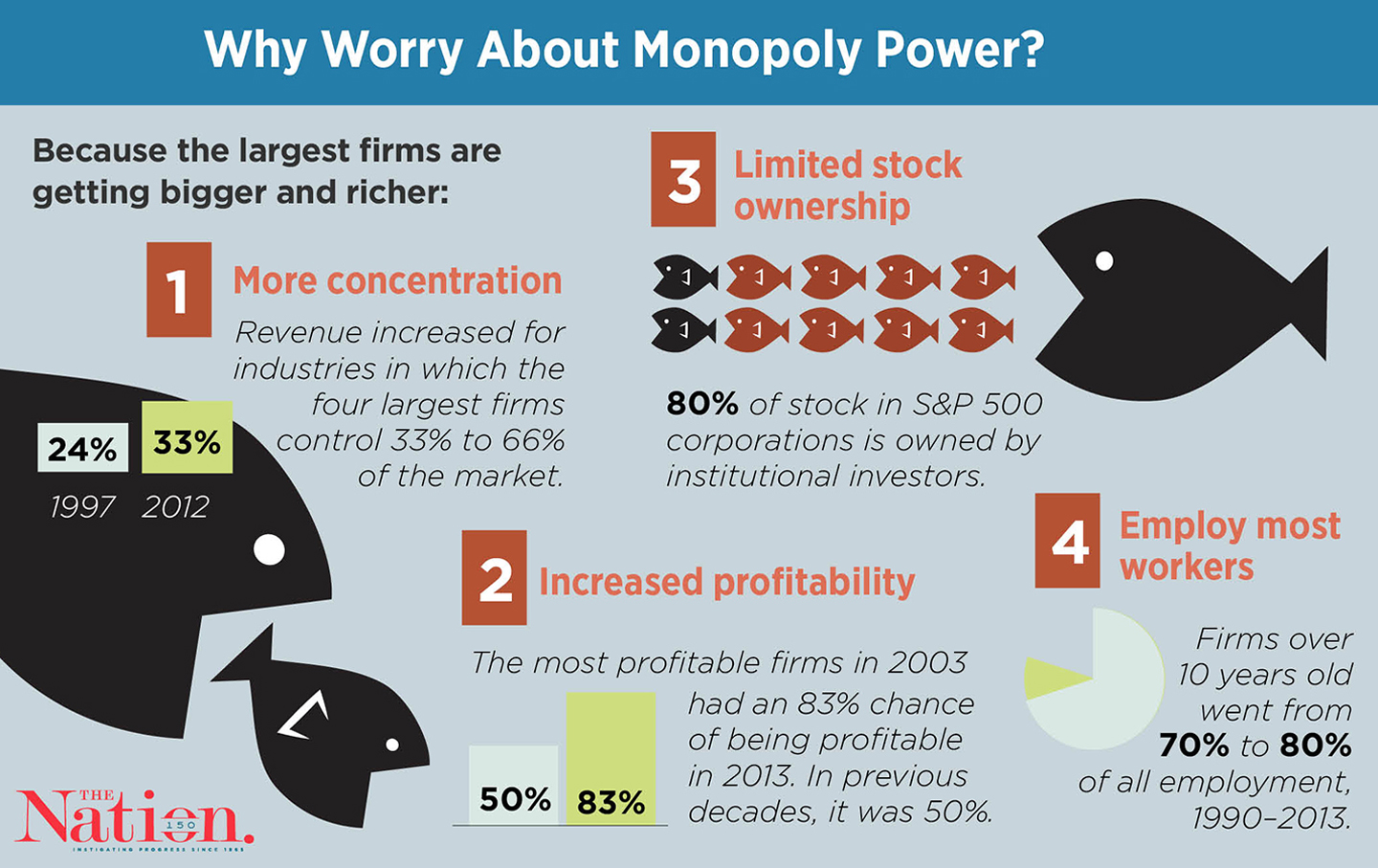 As if dealing with airlines wasn’t enough of a hassle, now flyers have to deal with airline monopolies. A recent study by Jose Azar, Martin C. Schmalz, and Isabel Tecu found that five of the seven largest institutional shareholders of United Airlines were also among the largest shareholders of Southwest and Delta. The researchers showed that mergers among these giant shareholders, such as with BlackRock’s purchase of Barclays Global Investors, results in higher prices for consumers. Even more disturbing, such monopolies are on the rise in dozens of other industries.

The infographic above shows the growth of monopoly power in the United States: Industries are becoming more concentrated, more profitable for their owners, more concentrated in their ownership, and older in age. Tackling these monopolies must become a priority in the years ahead not just to control rising prices, but also to rein in their growing power over consumers.

Public-utility regulation may be the most important way to curtail the growing monopoly power.

For this reason, it’s worth taking a second look at the fight for net neutrality: the principle that Internet service providers (ISPs)—businesses like AT&T, Verizon, and Comcast—should treat all Internet traffic equally instead of charging content creators to reach their audience. Net neutrality was one of the more remarkable successes of the Obama years, a bottom-up campaign that brought millions of citizens together to pressure industry-friendly regulators. Finally, in February 2015, the Federal Communications Commission reclassified ISPs as telecommunications services, declaring them public utilities like phone companies and allowing net-neutrality rules to go forward.

When it comes to addressing the new monopoly power in the United States, we should turn once again to public-utility regulations. The utilities here are platforms and infrastructure that everyone can rely on to carry out their activities. Public-utility regulation, which is designed to make certain resources universally accessible, is usually discussed in the context of natural monopolies, especially regarding expensive investments in infrastructure. But it’s broader than that, and it may be even more important in curtailing monopoly power than just breaking those monopolies up.

First, what we’re often worried about is a monopoly’s power to limit access to a necessary resource, especially for disadvantaged groups. As law professor K. Sabeel Rahman argues, public-utility law grew out of the need to ensure that certain businesses had “the duty to provide a service once undertaken, to serve all comers, to demand reasonable prices, and to offer acceptable compensation.” Rahman argues that such oversight is just as critical in the age of big Internet platforms—for instance, to ensure that companies like Uber don’t discriminate against people with disabilities.

Second, companies in some markets have an enormous social impact, and it’s appropriate to regulate the rates that they can charge in such markets. The Dodd-Frank financial-reform act created public-utility-style reforms regulating debit cards and limiting the fees that credit-card companies can charge merchants for business transactions. Given the essential nature of this payment system, it was crucial to control abuses here.

Third, by reducing the power of middlemen—those who control the networks of information, credit, transportation, and so forth—public-utility principles are pro-innovation. As law professor Tim Wu notes, discussing the principle of net neutrality, “The electric grid does not care if you plug in a toaster, an iron, or a computer. For that reason the electric grid is a model of a neutral, innovation-driving network.” As a result, the same electric grid that supported innovation in the 1930s continues to support it now, even though we’ve gone from inventing cars to inventing Uber.

Finally, public-utility-style regulation simply works. Rather than tinkering with market incentives, the state declares that businesses must adhere to certain principles of access, innovation, and fairness. These principles have been vital since we regulated the railroads and major utilities during the Progressive era, and we need them more than ever in the age of airplanes, Uber, and the Internet.